Go to homepage
Religion and Childrens' Health in Nigeria
Governance

Religion and Childrens' Health in Nigeria 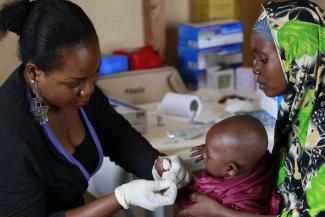 A health staff member takes a blood sample from a child at a clinic operated by Doctors Without Borders in Bagega Village in the northwestern state of Zamfara, Nigeria, on August 14, 2013. REUTERS/Akintunde Akinleye
by Chisom Nri-Ezedi December 19, 2022

As a pediatrician in Nigeria responsible for managing children with hematological and oncological illnesses, I have encountered several Jehovah's Witnesses who are the caregivers for children I treat. Due to religious views, they refused blood transfusions for their children. The most recent of these cases involved a five-year-old boy with sickle cell anemia, an inherited disorder that affects the shape of red blood cells and can slow or block blood flow. His elevated intracerebral arterial pressure (raised pressure in the brain's blood vessels) indicated an imminent risk of ischemic stroke.

Despite numerous counseling sessions, the parents declined a blood transfusion—a medical treatment that dramatically reduces the risk of stroke—in favor of conservative measures. Although the child improved remarkably, this scenario unquestionably creates a medical, legal, and ethical dilemma, one that merits a comprehensive review by all interested parties.

In 1872, the Jehovah's Witnesses movement was founded in the Northeastern United States under the name the International Bible Students Association. Their mission, based on the Bible, was to obey and teach about God. It is a religion based on Christianity, but with its own "unique" views, as well. In 1931, the movement became officially known as the Jehovah's Witnesses and has since attracted more than five million followers in more than 230 countries.

Today, one out of every six-hundred Nigerians is a Jehovah's Witness

Today, one out of every 600 Nigerians is a Jehovah's Witness. In 1945, around the time that blood transfusion was popularized to save the lives of young soldiers during World War II, Jehovah's Witnesses rejected it because it contradicts their beliefs and principles, which are rooted in the interpretation of Old Testament texts, in which God commanded his subjects to abstain from consuming another man's blood. For example, one biblical passage says, "Flesh with its life—its blood—you must not eat” (Genesis 9:4). Another reads:  "And whatsoever man there be among you, that eateth any manner of blood; I will even set my face against that soul that eateth blood, and will cut him off from among his people" (Leviticus 17:10-14).

The Jehovah's Witnesses firmly believe that a man's blood, which represents his life, should not be accepted in any form—red and white blood cells, platelets, and plasma—nor should members donate or store their blood. Instead, this religious sect strongly advocates for the use of blood substitutes such as bloodless surgery and the use of medications and/or locally available botanicals that either promote blood production or prevent its loss.

The position of this religious sect on blood transfusion, particularly when extended to young children who rely completely on their parents or guardians for their health-care decisions, poses a great concern. Recent reports reveal that 42 percent of children younger than five are anemic worldwide. Untreated anemia manifests as fatigue, weakness, dizziness, and drowsiness. In addition, anemia can have long-lasting effects on a child's growth, development, and academic performance, all of which contribute to reduced future social and economic earnings. Even more troubling is the fact that Nigeria, the most populous country in Africa, has the greatest prevalence of sickle cell disease in the world and is situated in a malaria-endemic region. These life-threatening disorders, one of which is characterized by an abnormal red cell shape and the other by a red blood cell parasite, are both associated with red blood cell haemolysis—the destruction of red blood cells—and severe anemia in affected individuals. Over 50 to 80 percent of African children, the majority of whom do not reach five years of age, die from malaria and sickle cell anemia due to a number of factors, including a caregiver's lack of knowledge, poor health-care seeking behavior, out-of-pocket expenditures, and insufficient health facilities and trained personnel, among other reasons.

The role of religion and its potential impact on these alarming facts, particularly as it pertains to blood transfusion, is not discussed nearly enough. Although there are several medical reports of blood substitutes being highly beneficial, they are oftentimes ineffective in the rapid reversal of the adverse physiological changes associated with severe anemia in children. In addition, the safety and efficacy of some of the blood substitutes are yet to be established in children and can be injurious to their delicate organs. As long as these gaps exist, the only safe alternative is blood transfusion, which when used appropriately, saves countless lives.

A child, legally defined as any person under the age of eighteen years, is completely dependent on parents or guardians for all decisions regarding their health. In situations where such decisions are not in the best interest of the child's health, a doctor is legally obligated to preserve that child's right to life.

The American Academy of Pediatrics recommends health-care providers recognize and respect the importance of religion in personal, spiritual, and social lives of patients and "to avoid unnecessary polarization when conflict over religious practices arises."

In Nigeria, this interplay with existing laws was exhaustively detailed in one decided case. In the case of Esabunor & Anor v. Faweya & Ors (2019), a member of the Jehovah's Witnesses religion sought reparation for a blood transfusion delivered to her one-month-old child without her consent. The mother, Rita Esabunor, had brought her child to a clinic for emergency treatment. The doctor found that the infant required an immediate blood transfusion. However, the child's parents said that under no circumstances should the infant receive a blood transfusion as it contradicted their religious beliefs. The parents also cited that there are health hazards associated with blood transfusion, including AIDS and hepatitis. The next day, a motion was brought to court by the learned counsel for the Commissioner of Police. The chief magistrate issued an injunction requiring the medical authorities of the clinic to do all and anything necessary for the protection and life of the child. The infant received a blood transfusion, recovered, and was discharged and carried home by the mother. Several days later, the mother filed a complaint for damages in The High Court, which was denied. The matter was taken to The Court of Appeal, which upheld the decision of The High Court.

In situations where decisions are not in the best interest of a child's health, a doctor is legally obligated to preserve that child's right to life

At The Supreme Court of Nigeria, it was ruled that "an adult who is conscious and in full control of his mental capacity, and of sound mind, has the right to either accept or refuse blood (medical treatment). The hospital has no choice but to accept their patients' wishes. When it involves a child, different considerations apply, and this is so because a child is incapable of making decisions for himself and the law is duty bound to protect such a person from abuse of his rights as he may grow up and disregard those religious beliefs. It makes no difference if the decision to deny him blood transfusions is made by his parents."

The court further held that "when a competent parent or one in loco parentis refuses blood transfusion or medical treatment for her child on religious grounds, the Court should step in, consider the baby's welfare, i.e., saving the life and the best interest of the child before a decision is taken. These considerations outweigh religious beliefs of the Jehovah's Witnesses Organization. The decision should be to allow the administration of blood transfusion especially in life threatening situations."

Although there are clear benefits of bloodless medicine today, in situations, when an urgent clinical need for blood transfusion is required in a child born to parents who are Jehovah's Witnesses, that child's right to life must be preserved at all costs. Every other consideration is secondary.