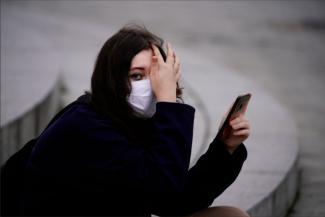 A young woman with a mobile phone, in Warsaw, Poland, on October 2, 2020. Jaap Arriens/NurPhoto via Getty Images
by Lillian Posner June 17, 2022

"Health data are the blood running through the veins of our healthcare systems," reads a May 2022 European Commission press statement about the new European Health Data Space (EHDS). But in one European Union (EU) member state, the drive to collect health data has unnerved those who fear that those veins will be tapped, and their sensitive information will bleed into another realm altogether: the legal system.

On June 3, Poland's Minister of Health Adam Niedzielski signed a new ordinance that requires Polish doctors to record information about their patients' pregnancies in a national database. The ordinance, referred to as a "pregnancy registry" by Polish legislator Agnieszka Dziemianowicz-Bąk, was met with alarm by some human rights activists and Polish women. Critics of the measure, which goes into effect today, consider the new data rules to be an unwelcome intrusion into their family lives and have raised fears that their sensitive health data could be used to intimidate or even prosecute them in a country where abortion is almost completely banned.

The government doesn't take a woman and her feelings into consideration. They want to monitor even the most delicate and intimate aspects of our lives

Closing Space for Abortion in Poland

Abortion in Poland, while legal under the Polish Communist regime, was banned in 1993, except in the case of rape, incest, severe fetal abnormalities, or to save the life of a mother. Since Poland's ruling Law and Justice (PiS) party took control of the parliament in 2015, the government has been steadily chipping away at both reproductive rights and rule of law. In 2020, Poland's Constitutional Tribunal issued a ruling that banned abortion due to fetal abnormalities, which up to that point had constituted 98 percent of abortions in Poland.

The near-total ban was extremely controversial, not least because it was instituted by a politically appointed judiciary rather than elected representatives, and it drove thousands of women to the streets in protest. It has also had tragic consequences for women’s health. In November 2021, a young mother named Izabela, while pregnant with her second child, learned that it had life-threatening congenital defects that would have met the qualifications for legal abortion under the 1993 ban. Because of the legal ambiguity of the 2020 ban, Izabela's doctors refused to terminate her pregnancy for medical reasons due to fear of prosecution, even after the fetus died. Unable to receive treatment, Izabela went into septic shock and died shortly afterward.

According to Irene Donadio, an Advocacy Officer at the International Planned Parenthood Foundation, the new law has introduced a "chilling effect" in which doctors are afraid to administer treatment and women are afraid to seek it even when it's technically legal. Polish women who are diagnosed with cancer while pregnant are frequently denied cancer treatment, leading to dangerous and sometimes fatal delays in care.

Although the term "pregnancy registry" has caught on in public discourse, the additional data that will now be recorded in Poland's existing Medical Information System (SIM) concerns more than just pregnancy. The Ministry of Health has underscored that in addition to recording pregnancies and expected due dates, doctors will now be required to record allergies, blood types, and other health information intended to improve patients' access to care, particularly in an emergency or when seeking care elsewhere in the EU.

"We're not creating any registers, but only expanding the reporting system based on the recommendations of the European Commission," Wojciech Andrusiewicz, spokesperson for the Ministry of Health, said at a press briefing on June 3.

The kind of data collection mandated by the ordinance is in fact consistent with the guidelines of the EU. When asked to comment on Poland's new data ordinance over email, a spokesperson for the European Commission underscored that while it does recommend cataloging information about pregnancy and that many other EU countries do, it is optional. But the email also noted, "If a Member State decides to introduce national rules on registering pregnancy data and on accessing these data without permission from the citizen, this is the result of that Member State's national health data policy. This is by no means a Commission recommendation or an EU level rule."

In a vacuum, the new policy is relatively innocuous, but paired with other Polish policies it could have serious implications for families. In his statement, Andrusiewicz sought to allay people's fears by stressing that only medical personnel will have access to the data. But that could change with passage of a proposed law currently being discussed in Poland's bicameral parliament, the Sejm.

The law concerns the creation of an Institute of Family and Demographics, which as conceived, would have access to the data in the SIM, as well as police records, the right to intervene in family civil cases, and the powers of a state prosecutor. The bill outlines data sharing provisions that involve the repeal of several EU data protections, for example, those that forbid the use of data "for the purpose of uniquely identifying a natural person, data concerning health, or data concerning a natural person's sex life or sexual orientation." The draft legislation regarding this institute passed its first reading in the Sejm on December 2, 2021, but has yet to be passed into law.

Although the institute is still hypothetical, this kind of government oversight of family decisions and potential for prosecution has the potential to further deter pregnant people from seeking care. High barriers to care may also drive pregnant people to seek unsafe methods to terminate their pregnancies. According to an article published in the Lancet, unsafe abortions are responsible for between 8 and 11 percent of maternal deaths worldwide.

Poland also has a checkered history when it comes to data security and a demonstrated willingness to prosecute even those who help women seek abortion care. Donadio has pointed out that "having ultra-repressive laws and a hostile environment leads to tragedy for everybody. For the women who need abortion care and for women who just happen to be pregnant because it can still place a risk since nobody ever knows how a pregnancy will develop."

Should the prosecutor's office attain the information in the SIM, it could potentially investigate any pregnancy that didn't result in a birth, including the estimated 15 percent of pregnancies that end in miscarriage.

Michał Gontkiewicz, a gynecologist at a district hospital in Plonsk, central Poland, has highlighted the stress such a fear puts on patients in an interview with local television station TVN 24: "As a tool in itself this is not dangerous, but patients may fear it will be used as a tool of the regime. Women are afraid that if they experience a spontaneous miscarriage, which is already a huge trauma for them, someone will accuse them of terminating the pregnancy, multiplying their trauma. Patients will be afraid to become pregnant not only for socioeconomic reasons, but also for fear of criminal consequences."

Paulina, a young mother from Mielec, Poland, who disagrees with the policy stated, "pregnancy and miscarriage is a very intimate situation for a woman, and it should not be treated purely as statistics. Right now, the Polish government does not take a woman and her feelings into consideration. They seem to want to monitor even the most delicate and intimate aspects of our lives."