Go to homepage
PEPFAR in a Global Democratic Recession
Governance 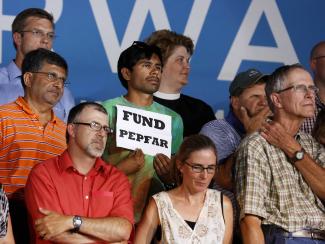 An audience member holds up a "Fund PEPFAR" sign during then-President Barack Obama's speech at a campaign event at Herman Park in Boone, Iowa, on August 13, 2012. REUTERS/Larry Downing
by Mark P. Lagon January 25, 2023

On its twentieth anniversary, the President's Emergency Plan for AIDS Relief (PEPFAR) is arguably one of the most effective foreign assistance initiatives in history in terms of results—lives saved. While the past two decades have witnessed PEPFAR's achievements, they've also seen democratic backsliding, as documented by Freedom House, a nonprofit organization that tracks democracy, political freedom, and human rights around the globe. And now acute recession of democratic norms poses challenges to PEPFAR's continued success. While PEPFAR's record and impact are strong, the political environment in implementing countries and globally requires redoubled vigilance against a slew of challenges: corrupt diversion of resources; social exclusion undercutting viable country ownership; and discrimination against key populations, including adolescent girls, LGBTQ+ people, and people with substance use disorders.

PEPFAR countries have adopted 60 percent of critical policies, compared to 48 percent in other LMICs

On PEPFAR's larger impact on governance, observers disagree. In the online magazine American Purpose, Jon Temin, vice president for policy and programs at the Truman Center for National Policy and a former member of the Policy Planning Staff of the U.S. Department of State, contends PEPFAR's major multiyear funding of illiberal states risks "creating opportunities for them to shift funds to projects that serve elite interests." Former Bush-era health official William Steiger and Obama- and Trump-era PEPFAR chief Deborah Birx, countered, "While PEPFAR hasn't magically eliminated one-party states in Africa, its model has brought revolutionary change to the nexus of democracy and governance: community engagement and empowerment."

Balancing pandemic and democracy goals is hardly new. PEPFAR's launch in 2003, coincided with President Bush's "Freedom Agenda" as another top priority. Domestic governance was a major consideration. The failure of earlier aid programs, especially in sub-Saharan Africa, inspired PEPFAR and contemporaneous initiatives—the Global Fund to Fight AIDS, Tuberculosis, and Malaria (the Global Fund) and the Millennium Challenge Corporation — to prioritize results, country ownership, governance, transparency, and accountability. This approach embodied the "Monterrey Consensus," set out at the United Nations's 2002 International Conference on Financing for Development in Mexico, regarding mutual domestic and international buy-in on investment and governance.

With PEPFAR's longstanding partnership, Uganda's HIV response has been among the most successful and acclaimed

Among the first wave of PEPFAR focus countries was Uganda, where President Yoweri Museveni has maintained power since 1986 by ruthlessly curbing opposition, and where legislation punishing LGBTQ+ people, and sex work, has repeatedly resurfaced. Yet with PEPFAR's longstanding partnership, Uganda's HIV response has been among the most successful and acclaimed.

Since inception, PEPFAR also made South Africa a focus country—though one party dominates its democracy and social equity, in practice, is far from provisions in the country's sterling constitution. In PEPFAR's first five years, South African President Thabo Mvuyelwa Mbeki propagated AIDS denialism and misinformation. But PEPFAR worked around him with other leaders, the military, and civil society. Despite economic inequality, today South Africa represents a very high-capacity partner in HIV and pandemic response.

Since PEPFAR's founding, democratic decline as a global trend included sub-Saharan Africa. Freedom House reported in 2022 the region's rising tide of authoritarianism, crackdowns on dissent and independent media, and rights abuses—including PEPFAR partner countries like the Democratic Republic of the Congo, Uganda, and Tanzania. Civicus, which tracks civil society leeway, documented many African governments passing restrictive laws that prevent protests, allow for the arrest of dissenters, and dissolve organizations and political parties posing a threat to their grip on power.

Kenya's multiparty democratic elections have been marred by threats of violence and denial of election winners. William Ruto became president in September 2022. As vice president, he said in 2015, "The Republic of Kenya is a republic that worships God. We have no room for gays." The prospect of discriminatory policies during his presidency that could slow effective HIV response is real. Nonetheless, Kenya has recently collaborated with PEPFAR on improving country ownership of funding and policy. (Similarly, Kenya increased its 2022 pledge to the Global Fund by 67 percent from its 2019 pledge.)

Despite discriminatory policies that could slow effective HIV response, Kenya has recently collaborated with PEPFAR on improving funding and policy

PEPFAR's current leadership is well-poised to grapple with HIV/AIDS and regression on governance. Global AIDS Coordinator John Nkengasong's credibility is high. He is a Cameroonian American, former head of the Africa Centres for Disease Control and Prevention during COVID-19, and as such an acquaintance of all African Union heads of state. The new PEPFAR strategy, Vision 2025, aims to work with the Global Fund and UNAIDS to achieve not only the 95-95-95 benchmarks for HIV response, but also a 10-10-10 formula: less than 10 percent of countries having punitive laws, less than 10 percent of a population experiencing stigma and discrimination, and less than 10 percent experiencing gender-based inequality and violence. It aims to accelerate strides toward equity and community stakeholders' influence, while applying its comparative advantages to wider pandemic preparedness and response (PPR).

PEPFAR's place among organizations grappling with both health and democratic norms is instructive. Both PEPFAR and the Global Fund, have worked energetically in a democratic Ukraine under siege, supporting health systems and HIV response through their local relationships. In parallel to PEPFAR, the Global Fund embodies a unique multistakeholder decision-making model at its board and in-country levels—requiring a Country Coordinating Mechanism (CCM) including civil society partners. Its approach to health and governance norms contributed markedly to the 50 million lives it has saved with partners (like PEPFAR) in its own twenty years.

The incipient Pandemic Fund housed at the World Bank must also face pandemics and country governance. Were it not for marked Biden Administration leadership and activists' advocacy, the facility's governing board might not have included seats for civil society representatives of the South and North. Whether the fund's impending rounds of grants prioritize and boost community agency in PPR will be the test of its efficacy.

PEPFAR can help increase equitable healthcare access and achieve HIV epidemic control during a democratic recession, if U.S. policy addresses four needs. First, PEPFAR should partner with governments that are in place, working to increase country ownership, but take care not to offer carte blanche and undue luster to illiberal states, as I have written about previously.

Second, it should take concrete steps to further increase civil society's role in annual country strategies—and make sure changes (like fewer or larger in-person meetings) don't have the opposite effect. Third, PEPFAR must continue to localize implementing partners, while never leaving those partners alone as states harass or sideline them. Finally, fighting discrimination, stigma, and neglect of vulnerable populations should be part of a more holistic agenda for fostering democracy—to include free expression, social inclusion and equal rights for all, not just free and fair elections.

An integrated approach to global health and democratic norms is complex. Cutting off PEPFAR funding from authoritarian or regressing governments isn't viable. Nor is removing pressure to increase equitable access to health from democratic governments. But nuanced partnerships with governments, social inclusion, localization, and holistic democracy promotion can sustain PEPFAR's transformative impact in its third decade.

Mark P. Lagon is the chief policy officer at Friends of the Global Fight Against AIDS, Tuberculosis and Malaria, and an adjunct professor for Georgetown University's Master of Science in Foreign Service Program. He served as a U.S. Department of State official for international organizations and for combating human trafficking.