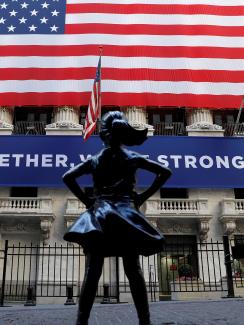 The "Fearless Girl" statue is seen outside the New York Stock Exchange following first trading session since its March coronavirus lockdown in the Manhattan borough of New York City on May 26, 2020. REUTERS/Mike Segar
by Bashar Malkawi August 14, 2020

As countries are still in the thick of fighting the COVID-19 health crisis and scientists and pharmaceutical companies are in the process of uncovering the molecular secrets of this novel coronavirus and developing potential vaccines, we need to revisit the issue of patent pools. During normal times in today's complex world, to produce certain goods and services, any manufacturer would have to obtain licenses to several interrelated patents, something that is known as the complements problem. Where there are many patents to obtain, this will complicate matters for innovation and indeed could lead to underuse of technologies and heavy patent costs [PDF].

In order to simplify the process, patent pools can be created between patent owners that bundle multiple pieces of intellectual property together, rather than on a patent-by-patent basis, into a single license so that they can license their patents to other parties collectively. Patent pools thus reduce transaction costs for licensees and preserve the financial incentive for patent holders to commercialize their products. All this seems easy and straightforward—in an ideal world. In reality, however, patent pools can create anticompetitive practices. While patent pools can be procompetitive, their anticompetitive effects arise in many ways.

Sometimes substitute patents that are inadequate or inferior are included in a pool purposefully to avoid grouping competing technologies from competing companies in a single pack. The patent pool can be used also as a vehicle to collectively set prices and avoiding competing against each other. The patent pool can have an anticompetitive effect when it restricts access to the pool by refusing to license the covered technology to new entrants or denying access to the pool to members only. In this way, the patent pool acts effectively as a cartel. Unfortunately, for many developing countries, their intellectual property laws or competition laws do not include extensive provisions to combat such anticompetitive behavior for patent pool members. In comparison, laws of other nations [PDF] such as the U.S. and EU can serve as an example in dealing with such issues.

In the U.S., there are the Antitrust Guidelines for the Licensing of Intellectual Property. The antirust guidelines recognize clearly the procompetitive benefits and anticompetitive nature of patent pools. Therefore, the antitrust guidelines recognizes that the effects of patent pools will be vetted on a case-by-case basis. The focus of antitrust examination will be on the formation or structure of the patent pool and whether this formation impairs competition. Courts assess most antitrust practices under a "rule of reason," which requires them to estimate the defendant's market power and the impact of some practice that is claimed to be unreasonably collusive or exclusionary.

In the European Union, there is the EC Technology Transfer Block Exemption Regulation and the Guidelines on Technology Transfer Agreements. The purpose of block exemption regulations is to provide a safe harbor for these agreements which meet the requirements of the regulation to be excluded from the application of Article 101(1) of the Treaty on the Functioning of the European Union. Such an exemption is good for business as its agreement may not be declared as an anticompetitive agreement under EU competition law. In order to enjoy the safe harbor protection, a certain predetermined market share threshold cannot be exceeded. According to article 3 of the EC Technology Transfer Block Exemption Regulation, technology transfer agreements may be eligible for the safe harbor when the combined market share of the parties does not exceed: 1) twenty percent if the agreement is concluded between actual or potential competitors; or 2) thirty percent if the agreement involves non-competing businesses.

According to the Guidelines on Technology Transfer Agreements it is necessary to distinguish between patent pools that includes complementary and substitute patents. A patent pool contains complementary patents if each of the patents is necessary to implement a certain technological standard, whereas a substitute patent exists if each patent can individually fulfill such purpose. The Guidelines on Technology Transfer Agreements provides that a patent pool containing substitute patents will be generally considered to infringe article 101.1 of the Treaty on the Functioning of the European Union and would not be exempted under Article 101.3, because such a patent pool would diminish price competition among the patent owners resulting in higher royalty fees for the licensees. At any rate, the analysis of whether patents are complementary and substitute requires ongoing review in light of competition law. The EC Technology Transfer Block Exemption Regulation does not cover exclusive licensing obligations of any improvements made by the licensee to the licensed technology.

Patent pools are beneficial as they can clear blocking patents, avoid costly infringement litigation, and integrate complementary technologies thus reducing transaction costs. However, these patent pools may have negative effects on competition through licensing agreements, which maintain market power for the licensor.

The U.S. Antitrust Guidelines for the Licensing of Intellectual Property and EC Technology Transfer Block Exemption Regulation can serve as templates for competition authorities in developing countries. Reforms in the laws and practices of developing countries could include creating safe harbors for agreements that meet certain thresholds and creating different classes of patents such as complementary and substitute patents, and essential and non-essential technologies.

Bashar Malkawi is a global professor of practice in law at the University of Arizona.