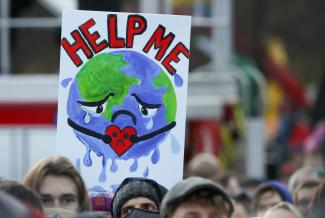 For many years, conservationists have pushed international negotiators to integrate nature-based solutions into global climate action plans. Recent scientific research found that such solutions can furnish at least 30 percent of the emissions reductions called for under the Paris Agreement—and the Glasgow climate summit represented a turning point for protecting and restoring nature. At a critical moment for the Earth's climate, government, private-sector, and civil society leaders supported natural climate solutions with unprecedented commitments and cash. If sustained and expanded, these pledges can drive rapid progress on climate change as necessary international commitments on decarbonization gradually take hold.

The Long and Warming Road to Glasgow

The first conference of the parties (COP) for the United Nations Framework Convention for Climate Change (UNFCCC) that I attended was COP13, held in 2007 on the Indonesian island of Bali. Although still fresh, my memories of that conference sometimes feel like mementos from a distant era. At that time, countries had not agreed on meaningful emissions targets, charted a pathway for achieving such targets, or formally recognized the importance of nature-based solutions. In Bali, negotiators were still debating the direction of travel, rather than the speed.

Even though the Bali Action Plan was far from perfect, COP13 did plant a seed. With Indonesia's tropical forests in the background, world leaders recognized the strategy of Reducing Emissions from Deforestation and Forest Degradation (REDD). REDD was groundbreaking because it established a clear link between conservation and climate action. It also laid out a landmark financial approach for protecting natural carbon sinks and harnessing the tremendous carbon-capturing power of the Earth's flora.

We have no chance of keeping warming below 1.5 degrees Celsius (2.7 Fahrenheit), even if we get everything else right

After Bali, incremental progress was made on REDD. COP14 gave rise to REDD+, which acknowledged the importance of conservation, sustainable management, and enhancement of carbon stocks. COP19 adopted methodological and financing guidance for REDD+, known as the Warsaw Framework. Still, global climate meetings largely sidelined nature-based solutions, which were confined to third-party events on the periphery of conferences. During COP21 in 2015, conservationists had to fight tooth-and-nail just to get nature mentioned in the Paris Agreement.

Though the scientific imperative for nature-based solutions was clear by the Paris conference, landmark scientific research was published in 2017, concluding that protecting, sustainably managing, and restoring natural ecosystems can achieve at least 30 percent of the emissions reductions and removals called for under the Paris Agreement. With climate models and projections assuming nature will keep serving as a carbon sink, the continued destruction of key ecosystems will mean that we have no chance of keeping warming below 1.5 degrees Celsius (2.7 Fahrenheit), even if we get everything else right.

In Glasgow, the seed planted in Bali finally bore fruit: COP26 will be remembered as the "Nature COP." Presiding over the conference, the UK government devoted an entire day of COP26 to the promise of natural climate solutions. But, in many ways, every day in Glasgow felt like Nature Day.

Events on Finance Day, Adaptation Day, and other days of the conference underscored that protecting and restoring the Earth's natural systems must be at the heart of the global climate agenda. At COP26, governments made unprecedented commitments to protect and restore vital ecosystems. In the Glasgow Declaration on Forests and Land Use, 141 countries—containing 90 percent of the world’s forests—have made commitments to halt and reverse deforestation by 2030. To realize that goal, public and private funders committed $19.2 billion to help protect and restore forests globally. Beyond protecting forests, four Latin American countries agreed to expand and combine their marine protected areas into a fishing-free corridor of 500,000 square-kilometers (193,051 square-miles), safeguarding one of the world's richest pockets of biodiversity.

These conservation pledges are monumental, and even more significant given the coalitions behind them. Never have we seen such meaningful cooperation on climate between government officials, business leaders, and civil society representatives. Those partnerships matter because protecting nature requires us to collectively reimagine what we value as a society. These multi-stakeholder commitments took years of research, advocacy, and radical collaboration to achieve—and those efforts are now driving transformative action around the globe.

The journey forward begins now and continues at COP27 and beyond

Deforestation has long had a rational dimension: Trees are worth more dead than alive. Upending that calculus requires reconfiguring economic incentives—a strategy in which creditors, investors, and asset managers all have a role to play. In Glasgow, financial institutions managing $8.7 trillion in assets committed to eliminate commodity-driven deforestation from their portfolios by 2025. Companies responsible for half the global trade in forest-risk commodities pledged to align their supply chains with 1.5-degree Celsius ambitions. More broadly, nearly half of all global assets are now covered under net-zero emission pledges. This financial leverage can drive change among the world's largest emitters and deforesters.

Now that private entities have made firm pledges, they must turn awareness and ambition into action and accountability. Capital flowing away from activities that degrade and destroy ecosystems must become nature- and people-positive investments. Indigenous peoples steward lands containing 80 percent of the world's biodiversity, as well as 35 percent of the Earth's most irreplaceable carbon reserves. Programs geared toward the protection and restoration of nature must be led, designed, and implemented with the full participation of Indigenous peoples and local communities. As the private sector becomes a major player in natural climate solutions, guardrails on monitoring, reporting, and use of offsetting in carbon accounting must be put in place.

We need to apply the same scrutiny to governments. Wealthy nations need to deliver on their commitment of $100 billion in climate financing and raise their climate ambitions by COP27 in Sharm el-Sheikh, Egypt. The unofficial slogan of COP26 was "Keep 1.5 Alive," but the climate crisis has arrived. Communities hit hardest by crop failures, sea-level rise, and extreme weather tend to be those least responsible for climate change. Envoys from island nations were a much-needed force for action in Glasgow, and these frontline communities must be included in negotiations on climate financing, and supported with funding for adaptation, resilience, and environmental losses and damages.

Just as COP13 feels like a bygone era, I hope that we can say the same about Glasgow in a decade. COP26's focus on nature, the historic private-sector commitments, and the global agreement on carbon markets offer a roadmap for a new era of climate action. The journey forward begins now and continues at COP27 and beyond.

Shyla Raghav is the vice president of climate change with the Center for Natural Climate Solutions of Conservation International.