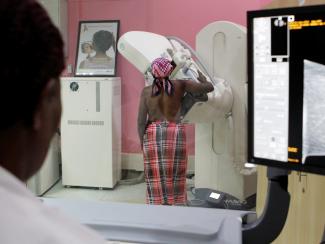 A patient undergoes a mammogram X-ray picture of the breast to look for early signs of breast cancer in the radiology unit at the Kenyatta National Hospital in Nairobi, Kenya on January 23, 2020. REUTERS/Njeri Mwangi
by Tolu Ojo January 14, 2021

The 37-year-old Nigerian mother of four was scheduled for a mastectomy to treat her aggressive HER2-positive breast cancer, but things were looking up. After seven months on ineffectual traditional remedies, U.S. cancer survivors in a Facebook group had encouraged her to try conventional medicine. She was finally seeing results.

Cancer incidence and mortality are on the rise in Africa. Etuke is one of more than 26,000 Nigerian women diagnosed with breast cancer in 2020, a number expected to double in the next twenty years. There the five-year breast cancer survival rate is 25 percent compared to 90 percent in the United States, where screening, early detection, and improved treatments are widespread.

Etuke’s cancer experience encapsulates the health-system challenges facing patients in African countries like Nigeria. In July 2019, she discovered a lump on her breast which was diagnosed as benign. But after three months watching it continue to grow, she returned to the clinic and the original diagnosis was determined to be a mistake—a potentially fatal medical error for a disease where delay reduces your odds of survival.

In Nigeria, the five-year breast cancer survival rate is 25 percent compared to 90 percent in the United States

According to the World Health Organization, cancer should not be a death sentence for anyone, anywhere. With early detection by primary care providers, many types of cancers can be treated effectively and cured.

But in Africa there is widespread lack of awareness about cancer and the efficacy of medical treatments, an over-reliance on traditional and alternative remedies, a lack of trained clinicians, and an underinsured population. An assessment of national efforts to fight cancer revealed that only 17 out of 46 African countries had operational policies to guide government strategies for cancer, and even fewer had formal cancer control plans. Nigeria’s most recent national control plan for cancer was developed in 2018. One of its aims is to improve access to evidence-based, high-quality, cost-effective cancer therapies, but realizing this goal remains a challenge.

Without strong implementation of cancer control plans, traditional therapies still dominate popular culture. These therapies may be marketed by faith healers or unlicensed herbal healers, and include natural remedies commonly marketed as Chinese or Indian medicine. Patients that seek these first may delay diagnosis of their illness until it has advanced precipitously, worsening outcomes in a setting where effective, timely treatment is already hard to find.

That’s what happened to Etuke. Based on advice from friends and family she opted for a cocktail of alternative therapies including traditional Chinese medicine and the popular STC- 30, a powder supplement aggressively marketed as stem cell therapy that can help cure cancer among many other conditions. All told, she reports it cost her more than $2,000. “Everybody, friends, families, tells you don't do chemo, chemo will kill you,” she said as she waited to pick up her Herceptin treatment at a cancer foundation in Abuja. “I believed that if you do chemo, you're going to die from cancer, not knowing that it's actually the other way around.”

Etuke’s initial fear of conventional therapy and the prominence of traditional remedies reflect the larger problem of lack of awareness of breast cancer across sub-Saharan Africa. Women do not regularly perform breast self-exams, and only seek care when there are obvious symptoms such as intense pain or bleeding. Tolu Falowo, the Executive Director of a Lagos-based organization Cancer Aware, says more than half the patients presenting at the organization have Stage 4 disease, many after first trying remedies without improvement.

Everybody, friends, families, tells you don't do chemo, chemo will kill you

Some traditional remedies have been widely used for centuries and are trusted, which explains their appeal, says Dr. Nwameka Lasebikan, a clinical oncologist based at the largest tertiary hospital in Eastern Nigeria, the University of Nigeria Teaching Hospital. “As part of human behavior, when faced with challenges, we tend to go back to our roots,” she said.

Another part of the problem, is that health-care workers do not adequately communicate with their patients. In one study of breast cancer patients in South Africa, only two percent had spoken with their health-care provider about their prognosis or about the unpleasant side-effects of chemotherapy and radiation, which can also drive patients back to alternative therapies when they are encountered with no warning.

Lasebikan made similar observations. In 2017 she led development of the breast cancer management protocol at her hospital to improve management of cancer patients, filling a vacuum left by the absence of formal national cancer management guidelines. The protocol includes a detailed guide on consent, developed to ensure providers spend adequate time counseling patients prior to treatment. But when health workers are overwhelmed by the volume of patients, some patients begin chemotherapy and radiation treatment before they have received proper counseling — and are then more likely to quit prematurely once they experience the unpleasant side-effects.

These gaps in patient education reflect the wider problem of an inadequate health workforce: Half the nations in Africa have fewer than 23 health care providers per 100,000 population, compared to the OECD average of 110.

Financial resources are another factor that delay appropriate care-seeking. The cost of cancer treatment is out of reach for many women. In Nigeria, six rounds of chemotherapy cost an average of $2,300 and with only two percent of the population insured, most women must pay for their treatments out-of-pocket. Considering 85 percent of Africans live on less than $5.50 a day, these costs are prohibitive for all but a few.

Eighty-five percent of Africans live on less than $5.50 a day

Awareness campaigns targeted at prevention, screening and early detection can make a difference in low-resource settings, like they did for Hajiya Hajara Musa. The 60-year-old cancer survivor lives in Kebbi, a rural town in northern Nigeria, and two years ago when she discovered a lump in her breast, she sought screening at the nearest tertiary hospital. She had learned to self-examine her breast from the health educators who visited her local Islamic center as part of a small program by Medicaid Cancer Foundation, an NGO that provides awareness, screening and treatment services in the state.

Musa described the nine rounds of chemotherapy she received as the hardest part of her cancer treatment, which also included a mastectomy. But counseling sessions prepared her for the side-effects and today she is in remission.

If Africa is to effectively address cancer, educating the public is crucial. During the COVID-19 pandemic governments across the continent were able to disseminate health messages to even the most remote regions. With the help of community health educators, text messages, social media and videos, Nigeria delivered messages in all the country’s major languages. Toll-free numbers to reach authorities and radio shows with call-in segments were also aired across the country.

But governments with limited resources and competing public health priorities such as maternal and child mortality, the largest causes of death in most African countries, may hesitate to make a similar commitment to cancer.

“COVID -19 kills faster and there was pressure to allocate substantial funding in a very short period of time,” said Falowo.

For the moment, then, alternative therapies like STC-30 will continue to flourish.

Tolu Ojo is a PhD student in Health Services Research and the Collaborative Specialization in Global Health at the University of Toronto.