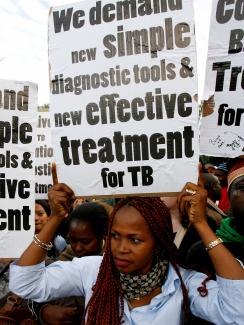 Demonstrators march through the streets of Cape Town to highlight the need for new strategies and medicines to curb the spread of tuberculosis on November 8, 2007. Mike Hutchings/Reuters
by Jason Socrates Bardi December 5, 2019

How often do the tides change? It’s every six hours at the beach, but in the fields of global health—often not soon enough by a long shot.

One big, bona fide, global health tidal shift occurred in 2012 when the U.S. Food and Drug Administration (FDA) approved the drug bedaquiline for treating tuberculosis (TB). That signaled the end of a long era marked by low investment and no new treatments for more than 40 years.

Despite the fact that for the last century TB has been one of the leading causes of death worldwide, despite the fact that it still takes more than a million lives a year, despite its emergence as the number one killer of people with HIV/AIDS, and despite the ominous rise of multi-drug resistant strains of Mycobacterium tuberculosis, the bacteria that cause the disease, many TB experts will tell you today it’s an exciting time. Today we are seeing new investment, new drugs in the pipeline, shorter and better-tolerated treatment regimens, a new initiative by the United Nation placing TB high on the agenda, and a general sense of rising tide.

But if a low tide reveals anything, it’s the murk at the bottom of the basin. Fording the muck just after the tides turn can be a muddy trudge.

That’s basically the lesson of a new article in the journal PLOS Medicine, which explores how the rollout of one new drug for TB was a complex, multifactorial, multi-stage process driven as much by governance as human health.

Fitting new drugs into a national treatment strategy and providing them to the people who need them starts—but does not end—with regulatory approvals and new recommended guidelines issued by the World Health Organization (WHO). What happens next is that those guidelines need to be taken up by individual countries, adapted to fit their health care systems, matched to their distinct disease burdens, and meshed with their sometimes Byzantine budget processes. The solemn lesson of bedaquiline has been some countries have not taken it up as quickly as experts would have hoped.

Hoping to discover what accounts for the delays in the process, researchers in Switzerland, South Africa, Belarus and Vietnam looked at bedaquiline’s rollout in the last three countries—which each have large, diverse TB epidemics.

Bedaquiline would seem tailor-fit for the TB national treatment programs of these three countries because all three have people who are infected with multidrug resistant strains of the bacteria—for whom the WHO specifically recommends bedaquiline as a treatment. Belarus has a high prevalence of multidrug-resistant tuberculosis, and more than a third of new cases there are drug-resistant. South Africa also has a high burden of multidrug-resistant tuberculosis, accounting for some 10 percent of reported cases globally, and also has many people with TB and HIV co-infections. Vietnam has a high TB burden, with more than 100,000 cases registered in 2016, but with a slightly lower proportion of people with drug-resistant forms

What worked to the advantage of all three countries was the fact that they all have robust TB treatment programs with engaged national managers who are strongly supported by their ministries of health—and in general all three have governments committed to TB treatment as a national priority and open to adopting new advances.

Even in such permissive soil, the rollout of bedaquiline took time to take root. It was not until June 2018 that South Africa announced the drug would be available to all eligible patients. By October of 2018 only 543 people had started treatment with bedaquiline—though hundreds more would start before the end of the year. Regulatory approval is still underway in Vietnam, though in 2019 the country made bedaquiline available under compassionate use.

Strong governmental support is key, said pulmonologist Grania Brigden, who is the Director of the Department of Tuberculosis at the International Union Against Tuberculosis and Lung Disease in Geneva and a corresponding author on the study.

Ensuring new treatments reach everyone who need them is complicated and involves far more people than health ministers and doctors on the ground, she said. Changes to treatment strategies at the national level may necessitate action by finance ministries, justice departments, regulatory agencies, research networks, and many other bodies within a country. It may also involve outside governments, NGOs, and funders of national treatment programs.

While changing the standards of care is never going to be easy—necessitating, at the very least, updating guidelines communicating them out, and providing training—introducing new TB drugs adds the additional complication of incurring new costs upfront. Most of the old TB drugs have been around long enough to be off patent, making them less expensive. Introducing new drugs means introducing new costs, as governments have to find money to purchase them.

“If knowledge of TB is poor or not accorded the appropriate importance and legitimacy by these non-TB agencies, it can be harder for the national TB managers to push the necessary changes through the appropriate channels,” Brigden said in an email. “Unless there is an understanding that if we pay now for TB we will be saving millions (in lives and GDP) in the future, then change will only happen slowly,” she added.

...if we pay now for TB, we will be saving millions (in lives and GDP) in the future...

Commenting in an email sent through a United States Agency for International Development (USAID) spokesperson, Ya Diul Mukadi, an expert who was not involved in the PLOS Medicine study, said that what Brigden and her colleagues describe in the paper is consistent with USAID’s experience supporting the introduction of new TB treatment regimens and translating new policy/guidelines into practice in other countries.

“Government commitment at the highest level of the Ministry is very important to ensure resources and policies are rapidly available to implement the required changes,” said Mukadi, who is a Medical Officer in the Office of Infectious Disease/TB Division at USAID. “High-quality data is necessary to alleviate the concerns from regulatory authorities, health care workers, and patients and build confidence in the regimen.”

Mukadi also stressed the importance of engaging patient groups and involving community organizations, something the paper does not address.

Heeding the lessons from the experience of rolling out bedaquiline in Belarus, South Africa, Vietnam and elsewhere may become ever more important as the tide continues to rise on TB treatment and as we move into a new era where advances in care become the new normal. To avoid getting stuck in the mud, Brigden said, countries need to be alerted to upcoming developments in TB care well in advance so that procedures can be expedited and treatment regimens adopted faster.

The hope in doing that, she added, is so “we stop a preventable and curable disease like TB killing a million and half people each year.”