How a recent heat wave is affecting Italy's longest river 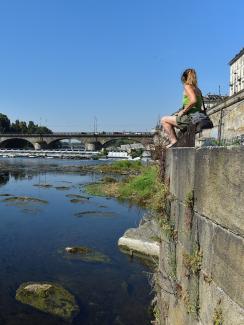 A woman sits next to the Po's dry riverbed as Italy's longest river experiences its worst drought in 70 years, in Turin, Italy, on July 15, 2022. REUTERS/Massimo Pinca
by Serena Giacomin August 31, 2022

The Po is the longest river in Italy, crossing the northern part of the country from west to east. It rises in Piedmont—where Italy borders Switzerland and France—at the mountain Monviso (part of the Alps), and flows into the Adriatic Sea to the east with a vast delta of six branches. It is the largest river basin in Italy (about 71,000 square kilometers or 27,413 square miles), and it boasts the highest flow at its mouth.

All this was before the drought of the last few months, which has led to a truly dramatic situation for the river, with repercussions for the agriculture and people of the Po Valley. In 70 years of tracking measurements, such as temperature and precipitation, nothing has compared. No similar values have ever been seen. In addition to the reduced flow into the Adriatic and the lack of rain that gives no respite, two other decisive factors at play include the temperature—higher than average by two to four degrees Celsius—and the absence of snow in the Alps. The lack of snow reduced the storage of water resources, which the Po Valley normally relies on during the warm season. Local residents and tourists, who usually enjoy the river's waters in the summer, are finding drained or shallow reservoirs where swimming was once possible.

Map of the Po River

In addition, severe drought is causing saltwater extension—a higher level of salinity—along the river delta. The salt wedge rise already exceeds 15 kilometers (5,791 miles), and the situation is likely to worsen. The effects are already tangible, especially for agriculture. It has become necessary to suspend irrigation in some areas, where emergency mobile pumps have been activated to ensure the survival of crops. The saltier water is killing crops and affecting shellfish—a popular ingredient in Italian dishes—populations. Direct consequences are also important for local residents as the water tables intended for drinking use could be contaminated. Birds and other wildlife that live in the river's wetlands are losing habitats, as well.

In July, the Italian government declared a state of emergency after a rainfall reduction of 60 percent and 85 days without rain in Piedmont. For Emilia Romagna, another region crossed by the Po River, this year recorded the driest winter in nine years due to a lack of rainfall, especially in the Bologna, Ferrara, and part of western Emilia areas. Temperatures trended 3 degrees Celsius higher than average, ranking the winter of 2022 as the second warmest in the past 40 years. This situation has been going on for months. Since the beginning of the year, flows at all gauging stations (locations where flow is tracked regularly) have remained below average. It is no better for tributaries (locations where other smaller rivers and streams flow into the Po) where flow rates were reduced by 60 percent, with values close to historic lows at many gauging stations.

Also in July, near the village of Borgo Virgilio, close to the northern city of Mantua, river waters were so low fisherman spotted an unexploded 1,000-pound bomb left behind from World War Two. Bomb disposal experts removed the fuse from the bomb once the area was cleared for safety.

The winter, which is usually very unstable climatically, also proved to be particularly stingy with precipitation. Cumulative rainfall was well below the average during the 2006 to 2020 period and close to the minimum values; only February 2012 and 2020 recorded lower cumulative amounts over the same period, making this winter the third driest in the past 65 years. As early as March, the Po River District Basin Authority warned that "the current water availability will not be able to meet the needs of the first part of the summer, generating a situation of high stress for the river habitat, and a lack or limitation of supplies for the productive sector."

A state of emergency was declared late in the summer, too late not to have severe consequences on human activities that benefit from this environment. A situation that highlights the urgency of applying adaptation actions to ongoing climate change, so that the effects of adverse weather phases—such as this prolonged dry spell—can at least be partially mitigated.

Serena Giacomin is a physicist and climatologist, and president of the Italian Climate Network.