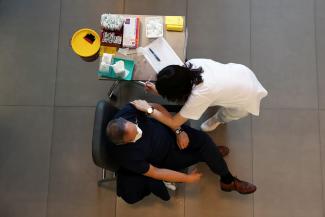 A medical worker vaccinates a man against the coronavirus disease as Israel kicks off a coronavirus vaccination drive, at Tel Aviv Sourasky Medical Center in Tel Aviv, Israel on December 20, 2020. REUTERS/Ronen Zvulun
by Ted Alcorn and Thomas J. Bollyky January 28, 2021

Since launching its vaccination campaign on December 20, Israel has vaccinated over 40 percent of its population, boasting the fastest vaccination program in the world and turning the country into an exemplum for efficient vaccine distribution. To understand just how Israel was able to pull off such a feat, Think Global Health sits down with Israel’s former Coronavirus Czar and CEO of Tel Aviv’s Sourasky Medical Center, Dr. Ronni Gamzu, who discusses how Israel’s centralized health-care system and military came into play, ongoing challenges in the pandemic response,  and what the United States can learn from the Israel’s coronavirus experience.

Think Global Health: What drew you to accept the position of Israel's coronavirus czar when others reportedly were reluctant to take it?

RG: Coronavirus is a huge challenge for any country, for any health-care system. People all around your country are looking for one who is not a politician. And once you understand that this is what your country needs, you do not ask too many questions. And you accept the challenge and you take the risks because you know that you can do the job, even though you're not 100 percent up to it. You understand that this is a time of war, and you do not do too many calculations at that point.

Think Global Health: You told the New York Times, “I'm not a politician. I'm a professional.” But public health work obviously involves a lot of navigating of politics. What are the political lessons that you drew from your experience and that you think other clinicians and public health leaders should be learning from this pandemic?

RG: Sometimes we professionals say, "this is politics. I don't want to be involved." The most important lesson if you want to change things, to influence, to do good, is that you have to be within and mixed with politics. You shouldn’t say, "this is a dirty game, I'm not going to play it." You have to do whatever is necessary to make things better. And sometimes it's going against politicians, it's using the trust that your citizens gave you and using that to push for the right thing. So, my most important lesson is that you have to fight. You will not get 100 percent, but you will do better.

Think Global Health: Did anything surprise you about what you are able or unable to achieve?

RG: I was surprised—and still am—by the huge diversity and gap between communities in Israel, a diversity that really influences our resilience as a nation. I understood that we have Arabs, Israelis, people that are secular or religious or Orthodox. I never realized how deeply diverse they are. And the polarization, I would say, of certain groups or communities in Israel is a challenging issue during an epidemic.

Think Global Health: In recent weeks, around the world, the conversation has shifted to vaccines and vaccine distribution. As a geographically compact, highly technologically advanced country with a robust, universal health-care system, Israel has some advantages, but are there other lessons from Israel's vaccination campaign that could be helpful for an outsider to understand?  Particularly if any of them are applicable in the United States, which is stumbling, apparently, in its distribution.

RG: Besides the logistics of distribution, the community spread of the virus, and the infrastructure of your health-care system, an issue that has not really been raised is vaccination culture. Israel has always embraced vaccination and fought to achieve a high vaccination rate. Around eight or nine years ago when I was director general of the Ministry of Health, there was a threat of polio—we had a few hundred carriers —and we vaccinated one million children around Israel. This kind of culture, to opt for vaccination because of some kind of a public health issue, allowed us to achieve this relatively high rate.

Think Global Health: It's our understanding that Palestinians living in the West Bank and the Gaza Strip are not part of Israel’s vaccine distribution plan.

RG: It's a tough issue. Israel tends to take responsibility for security, and not on the civil life within the Palestinian territories. I believe we should do more than that, but this is a governmental policy. And I must say that, I'm not sure that the dynamic allows for a climate of civil cooperation.

On the moral level, I believe most Israelis feel a responsibility [to cooperate on vaccine distribution]. But, overall, there is not enough mutual civilian cooperation between Israel and the Palestinian Authority and territories to do it.

Sometimes as professionals, we really want to have more of those [cooperative] relationships, to take more responsibility. People are coming from the territories to our hospitals, and they are getting medical care as Israeli citizens. We look at that as our moral responsibility. But this is not common in the relationship between Israel and the Palestinian Authority. There is not enough cooperation on civilian issues.

Think Global Health: You mentioned the primacy of security, and an infectious disease obviously does contribute to potential insecurity.

RG: Yeah, of course. But you know, the Israel Defense Forces and all the security bodies that exchange data and interests sometimes do not see public health as their responsibility. The Ministry of Health in Israel has an ongoing, mutual relationship and understanding to assist the Palestinian Authority. This only happens in medical services within hospitals. Public health is not exchanged enough between Israel and the Palestinian Authority, sadly.

Think Global Health: Israel, by the recent reports that we've seen, has vaccinated upwards of 30 percent of its population, but new cases still seem to be slow to come down. Do you have any thoughts to explain that?

RG: On one hand, transmission is not falling enough. On the other, it's not climbing. It's gradual, delicate, but for sure you see the effect of vaccination

Think Global Health: Do you have a sense of the prevalence of the COVID-19 variants in Israel? Might that be a countervailing force, keeping new case counts high despite the high rates of vaccination?

RG: We all know that the 501 mutation—the British mutation as well  as the South African—both have the same change in amino acid and it may cause a higher infection rate. They can also involve younger people, and I'm not sure about that. The British mutation—which is now at a very high prevalence in Israel, I would not be surprised if it's around half [of all cases]—is another cause for the high number of infected people per population in Israel.

Think Global Health: Early in the pandemic, there were criticisms of the Israeli response; now, at least in the rollout of the vaccine, it is being touted as a global success. Is it too soon to ever declare a certain country to be a "success"?

RG: In Israel, we have relatively high rates of infected people, new cases and overall. There are three reasons for that. The first one is we have the highest rate of tests per population in the world. Like Denmark, we are testing around 100,000 people per day.  The strategy is to identify as many asymptomatic cases as possible. Second, in my view, when you have a younger population, then you tend to have a higher rate of coronavirus per population. This is because the asymptomatic spread of young people is higher. And the third issue is that we didn't manage it well enough: between the first and the second wave, we didn't take the right steps in restrictions and within the communities.

Israel is testing about 100,000 residents per day for coronavirus

Think Global Health: What do you think the Biden-Harris administration should prioritize in terms of their response, as they take the United States in a new direction?

RG: The most important step  is to aim at getting as much vaccine as possible and to have a good way to distribute it. We can talk more about obedience to restrictions and lockdowns, but I do not believe that at this time these are the most effective steps. We are beyond that mainly in the community that has not responded to restrictions as well as most of the states in the United States. The main thing is to achieve a higher rate of vaccination and to put huge efforts into that. And go for more and more tests. But working on vaccine distribution is the main thing that I believe should be done in the United States at this particular time.