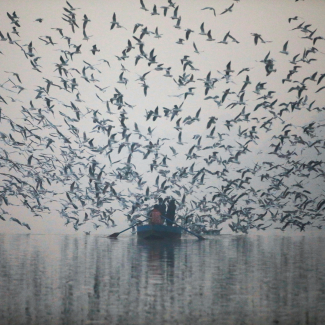 People feed seagulls from a boat at Yamuna river, on a smoggy morning in New Delhi, India, on November 18, 2021. REUTERS/Navesh Chitrakar
by Mary Brophy Marcus December 9, 2022

We asked India's former union secretary for the Ministry of Health and Family Welfare, K. Sujatha Rao, to share her thoughts on India's pollution problem.

Think Global Health: New Delhi has been in the news again recently for its high levels of pollution. Why is it so bad there?

K. Sujatha Rao: You have to understand the Delhi pollution issue in context. It's geographically bound by the mountains, and it is surrounded by these nineteen districts. The air gets trapped there, so in the summer, hot air takes away any pollutants. But when it's cold, the air settles down and there is no escape route for pollutants—it's like a lid. All of the waste burning that is happening and all of the pollutant particles that are emerging from other sources of contamination get trapped.

That is the reason why Delhi is a particularly bad situation where air pollution is concerned. All of the north has similar geographic and climatic constraints. India has the enormous distinction of having the greatest number of cities which are highly polluted. And Delhi is certainly one of the three top polluted cities in India and in the world.

When it’s cold, the air settles down and there is no escape route for pollutants — it’s like a lid

Think Global Health: What are the top sources of pollution in India?

K. Sujatha Rao: Construction is a main polluter—it throws up a lot of dust. Also, in Delhi, the population is 25 million and we have more than 3,000 to 4,000 factories that pollute the air. And this is peculiar to Delhi, but it has about eleven small thermal stations that provide power, and thermal stations are highly polluting. The city also has high traffic—it is leaping and growing in bounds. We have very, very dense vehicular traffic. There has to be a shift in the transportation strategies in all of our cities. In Delhi and other metro areas with dense vehicular traffic, there is a certain amount of contamination of gasoline with kerosene. It happens largely because of the gas pricing policies. People need economic incentives to use clean fuel.

K. Sujatha Rao: Cooking fuel is a problem. At least 100 million people depend on cow dung cakes and other biomass sources for cooking and that has its own problems in regards to polluting the air. So we need to take some kind of policy corrective for that. It is cheap and they get it from their animals—agriculture waste—but they area bout five to ten times more polluting than a gas stove would be.

So these are some of the factors that are really contributing to air pollution.

Think Global Health: What are the health implications of these types of air pollution?

K. Sujatha Rao: There has been a steady increase, particularly in northern part of the country, and particularly again Delhi. In India, about 1.67 million people died in 2019 due to air pollution [which translated to $36.8 billion in economic losses]. That's a huge number and in Delhi, it's estimated that over 30,000 people die from air pollution each year. It has a large trail of mortality and it is largely respiratory infections—lung diseases, COPD, asthma bronchial infections. These are the main impacts. And it also leads to cardiac arrest and gastrointestinal problems. Respiratory infections are also the third or fourth highest mortality factors in India.

K. Sujatha Rao: Of course, air is equally distributed to all—rich and poor, young and old—we all breath the same air. But its impact is disproportionately felt by poorer people. Those who work in the construction industry, those who work in factories that create pollution, those who work in unhygienic environments—these are the people whose health is much more impacted by poor air quality. They may also be nutritionally compromised and immunologically compromised. Death is one aspect, but also long morbidity has an impact on their earnings, because not only do they lose productivity in terms of work, but also they spend money on buying health care, unless they go to government hospitals. So, these are the kind of social and economic impacts that air pollution has. It is quite devastating.

Think Global Health: How can changes in national or local level air pollution policies shift the course of pollution's affect on health in India?

K. Sujatha Rao: India is a federal country—not so federal as the U.S.—and in our constitution, health is a state subject. So essentially, each state ought to have its own very strong stand on industries that are polluting the environment—polluting our air and waterways.

But, the government of India needs to take this much more seriously, too, and it hasn't. It needs to come up with stronger controls on pollution, and what I mean by that is that perhaps some hard decisions need to be taken to shut down the thermal stations and replace them with cleaner fuel for power. They need to bring in new technologies for agricultural waste, that do not involve burning it. But these measures are costly and the agricultural economy can not sustain them, or invest in it in order to supply small farmers with the kind of machinery they need. Heavy subsidies perhaps have to be given by the government to encourage them to use this technology, or provide common facilities to do so.

What Delhi does is interesting. Every time the pollution gets very high, beyond acceptable levels, they have have an odd/even policy. They regulate traffic by having all odd-numbered car numbers allowed in use on one day, and even numbers on the next. They shut down half of the thermal stations and half of the construction. It's essentially a lockdown.

And they found during the lockdowns due to COVID, that the air quality improved. For the first time, we could see blue skies in Delhi. One can lead oneself to believe that COVID was probably nature's way of saying halt, let the earth breath a little bit for God's sake. We saw many more birds. All of nature seemed to be rejuvenated during COVID. That was a signal we all found interesting.

There are technologies to reduce emissions into the air and I think we need to be more stringent in our enforcement of them, and take this more seriously. It's a long-term project.

Think Global Health: One final unrelated—yet health-focused—question. As someone who has been in public health leadership for a long time now in India, how do you think India is doing now, coming up on three years of COVID?

K. Sujatha Rao: COVID really put public health on the map. And even more than public health, health as a sector. It's been one long neglected sector in the battle for prioritization among India's different sectors—development, roads and highways, factories and industry. As opposed to developing health and education. COVID has done one thing. For the first time, we're seeing health as an electoral promise. It never happened before. It is not like the United States. In India, health is hardly an issue that attracts any political party votes. But now we find even the prime minister making promises and commitments on health-related issues in recent elections. And several other chief ministers are beginning to show interest. COVID-19 has had such a devastating imprint on all of us and health has certainly gained visibility finally.

Ghostly images of some of the world's most polluted metropolises