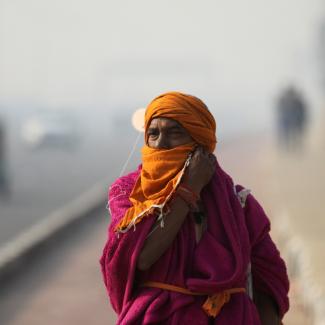 A Sadhu, or a Hindu holy man, adjusts a cloth on his face as he walks across a highway on a smoggy morning in New Delhi, India, on November 18, 2021. REUTERS/Anushree Fadnavis
by Aatmika Nair, Anwesha Maharana, Avanti Andhale, Siddhesh Zadey April 20, 2022

In February 2021, a landslide on the mountain Nanda Devi in the northern Himalayas caused flooding in the  Chamoli district in Uttarakhand, India, about 40 kilometers away. The flooding in this district took 58 lives and displaced more than 150 people. Thinning ice sheets, like the one involved in the Chamoli flood, are an established consequence of global warming. The recent event amplifies the dangers of landslides and floods in an already seismically active area. In addition, rampant deforestation and rapid infrastructural development of such fragile areas also make the region vulnerable to avalanches.

India is grappling with climate change and its direct and indirect consequences on human health, so health needs to be at the center of discussion about climate change in the country. The health consequences of climate change are a result of various exposure pathways, including temperature, air quality, vector ecology, food security, and water quality and quantity.

India is a vast country with diverse geographical and climatic conditions so its vulnerability to climate change events varies by location—different parts of the country experience different climate-related diseases. Climate change will also further exacerbate existing problems such as poor sanitation, inadequate infrastructure, water scarcity, and inaccessibility to health services in rural areas, rendering those areas even more vulnerable to climate-sensitive diseases. For this reason, climate-related diseases need to be addressed in a decentralized manner.

According to a district-level vulnerability assessment report, the regions of Assam, Andhra Pradesh, and Maharashtra rank highest on an overall vulnerability index score, which is based on exposure to climate change events, sensitivity, and adaptive capacity in the region. Districts including Puri, Nayagarh, Khorda, Ganjam, Gajapati in Odisha state, and Darbhanga in the state of Bihar are vulnerable to all three types of hydro-meteorological disasters: floods, droughts, and cyclones.

The 20 Indian States Most Vulnerable to Climate Change

Three health indicators—air pollution, non-optimal heat-related illnesses, and vector-borne diseases such as dengue, which spreads via the bite of infected mosquitos—best demonstrate the consequences of climate change's effects on human health in India. According to a 2019 Global Burden of Diseases study, while overall deaths in India attributed to air pollution have been declining steadily from 134.44 deaths per 100,000 people in 2000 to 119.89 deaths per 100,000 in 2019, deaths attributable to ambient particulate matter (PM2.5) are rising at an alarming rate—at almost a twofold increase over the past two decades. India is also one of the largest contributors to global consumption-based CO2 and PM2.5 emissions (7 percent and 16 percent, respectively). Although India has made some strides to switch to renewable sources of energy, coal remains a key source of power generation which leads to immense contributions to CO2 emissions in the country.

Climate change is known to worsen some infectious diseases, including avian influenza, Ebola, tuberculosis, parasitic infections, mosquito and tick-borne diseases, and cholera. Global mobility and urbanization are major drivers of the increase in dengue virus infections. Dengue cases have doubled globally every decade since 1990. Aside from an increase in the number of cases and the severity, its geographical range has also expanded significantly. Dengue was previously limited to urban areas, but it has now spread to rural parts of India and to new regions, including Orissa, Arunachal Pradesh, and Mizoram.

India and Brazil had the biggest absolute increase in heat-related mortality between 2018 and 2019. According to the Drought Early Warning System, 21.06 percent of India's land area is facing drought-like conditions. Drought has been linked to an increase in suicides among farmers, and is most pronounced in agricultural states that experience frequent droughts.

According to the Global Climate Risk Index, India is the seventh most vulnerable country to climate change effects. India could suffer around a 2.6 percent dip in GDP by 2100 and see a 3.5 percent increase in poverty by 2040, even if the average temperature rise is less than 2 degrees Celsius.

Climate change threatens not only health, but India's health-care system by weakening the country's already troubled health-care delivery. In India, the health sector contributes 5 percent of the national carbon footprint. A survey conducted at primary health care centers in five rural areas in the Jagatsinghpur district of Orissa revealed that these facilities are not adequately prepared to cope with floods despite the annual occurrence of flooding in the district. In Ahmedabad, the health-care system was found to be ill-equipped to deal with heat-related illnesses.

India lacks a national and sub-national level assessment of its health facilities' resilience in the face of climate change. Health-care planning, capacity building, and building a climate-resilient health infrastructure should be priorities. India along with other South-East Asian members of the World Health Organization (WHO) has adopted the Malé Declaration that commits to building green, climate-resilient health systems that can anticipate, prepare, and mitigate the effects of climate change. Considering the vulnerabilities, health indicators, and health sector preparedness, the need for a comprehensive, decentralized, and customized health adaptation plan to cope with this accrescent public health challenge is urgent.

In its Nationally Determined Contribution (NDC)—a climate action plan to cut emissions and adapt to changes in climate—submitted to the United Nations Framework Convention on Climate Change (UNFCCC) in 2016, India submitted a "National Action Plan for Climate Change and Human Health" (NAPCCHH), under the National Health Mission (NHM). The NAPCCHH envisions protecting citizens from climate-sensitive risks and illnesses. India also aims to build the research capacity needed to fill the evidence gap on the consequences of climate change on human health.

Raising awareness through existing programs for disease control is important. The Government of India (GoI) acknowledges the interdependence between health issues and environmental factors. Therefore, collaborative actions from different ministries are warranted. Various climate-sensitive diseases are dealt with through specific vertical programs or missions focusing on resilience, mitigation, and adaptation. For instance, the National Mission for Sustainable Agriculture, National Water Mission, and National Mission on Strategic Knowledge for Climate Change are consulted for foodborne and malnutrition-related diseases.

The government has proposed that the states design their own State Action Plans for Climate Change and Human Health (SAPCCHHs) based on the burden of climate-sensitive diseases and climate vulnerability in their districts. This is aimed to design more detailed adaptation strategies in collaboration with the local actors, integrating climate-sensitive health concerns with state programs. In addition, the government has recommended that health departments initiate programs for the "greening of the health sector." For example, adopting environmentally friendly technologies and using energy efficient services.

Twenty-nine out of thirty-six Indian states and union territories have submitted regional plans to the National Centre for Disease Control (NCDC). Only the Andaman and Nicobar Islands, Daman and Diu, Delhi, Lakshadweep, Maharashtra, Nagaland, Rajasthan, and Telangana do not have a SAPCCHH. Although most states have identified pertinent climate-sensitive diseases and have laid out standard adaptation plans, strategies for reporting, monitoring, and evaluation are not implementation-ready.

Andhra Pradesh is arguably the only state with a comprehensive adaptation plan based on evidence and prioritization of climate-sensitive health risks in the region. The occurrence of the mysterious disease outbreak in Eluru, the current prevalence of vector-borne diseases, and excess mortality and morbidity due to heatwaves have led the state government of Andhra Pradesh to constitute a task force to conduct a vulnerability assessment and risk mapping of climate-sensitive diseases in the state and consequently devise a health adaptation plan accordingly.

Climate change is the biggest public health challenge of this century and India could suffer devastating consequences if it doesn’t take action. Inaction could undermine other efforts to reduce the burden of various diseases.

At the 26th UN Climate Change Conference (COP26) in Glasgow last fall, India committed to five goals to limit temperature rise, including an increase in non-fossil capacity by 500 gigawatts (GW) by 2030, meeting 50 percent of the energy requirement from renewable energy by 2030, reducing total projected carbon emissions by one billion tons from now till 2030, reducing carbon intensity in the economy by less than 45 percent by 2030, and achieving net-zero by 2070.

The targets are ambitious and need to be accompanied by an assessment of the health benefits of mitigation. Although India is rated highly in the Climate Change Performance Index for greenhouse gases, renewable energy, and climate policy, there is very little or no mention of health in these policies. India has yet to submit an updated version of its NDC to UNFCCC. The need for India to strengthen the NDC by including health-centered climate targets and policies is vital. Also, India is not included among countries that have committed to the COP26 health program, which involves developing a low-carbon and climate-resilient health system.

According to the 2021 WHO climate change and health survey, India has a health surveillance system in place for all climate-sensitive illnesses. But it’s unclear whether it includes meteorological information, a climate-informed early warning system, and a response plan for all except heat-related illnesses, and air-borne and respiratory illnesses. The GoI and states need to develop comprehensive action plans and detailed proposals to procure more funding from national and international sources for the implementation of targeted adaptation plans.

Climate change-related health policies have the potential to be well-received by ministries, politicians, industry, organizations, and citizens in India when the public health impact of climate change is explicitly stated. While the GoI has initiated several strategies to mitigate the health effects of climate change, massive targeted improvements are urgently needed. India needs to prioritize climate change and health while formulating programs and policies that provide a sustainable and healthy future for all.

Aatmika Nair is a medical officer at the District Tuberculosis Centre under the Mumbai District TB Control Society, in Maharashtra, India. She is a researcher at the Association for Socially Applicable Research (ASAR), a non-governmental, not-for-profit think tank and advocacy group in Pune, Maharashtra, India.


Anwesh Maharana is a graduate student at KU Leuven, Belgium pursuing her research in astrophysics, specializing in solar physics and space weather.


Siddhesh Zadey is a researcher in the Department of Surgery at Duke University School of Medicine in Durham, North Carolina, and a co-founder of the Association for Socially Applicable Research (ASAR).

On the Front Lines with India's COVID-19 Warriors

A New Era of Climate Action Calls for Climate Doctors

Educating this generation of physicians in climate resilience is critical