Go to homepage
Flu: When Spillovers Spill Over
Environment 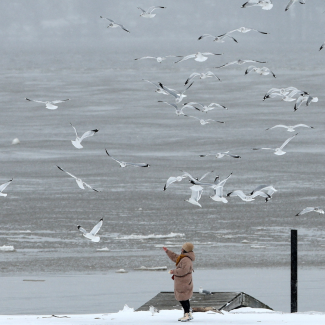 The United States is experiencing one of the largest animal outbreaks of highly pathogenic avian influenza (HPAI) in its history, with origins in North America that trace back almost a year. In December 2021, the H5N1 virus of Eurasian lineage was detected on the North American continent in a multi-species exhibition bird farm in Newfoundland and Labrador, Canada, and within months was reported in at least ninety-nine wild bird species, commercial poultry, and even mammals, including bobcats, red foxes, coyotes, skunks and seals. And now, for the first time in the United States, a human has contracted the virus.

As of this writing, more than 49 million birds from commercial and backyard flocks have been affected across forty-three U.S. states. Commercial poultry farms have culled their infected animals to reduce economic losses—a lesson learned during the 2014-15 flu outbreak that resulted in the loss of 50 million commercial birds at an estimated cost of $1.3 billion.

Case counts and distributions in wild birds have been equally astounding. Department of Agriculture surveillance efforts in 2022 have detected HPAI in wild birds in almost every state in the continental United States, plus Alaska. Active surveillance has found more than 3,300 infected wild birds. This extensive transmission through wild avian species is more pronounced than in previous U.S. epizootics, or animal epidemics; in the 2014-2015 outbreak, fewer than 100 wild birds tested positive for H5, primarily along the Pacific Flyway, one of four major North American migration routes for birds, especially waterfowl. Affected species in this outbreak range from the relatively abundant Canada goose and wild turkey to the more vulnerable bald eagle and snowy owl. How many of these birds are actually symptomatic is difficult to determine, as detections often occur opportunistically through the sampling of dead birds and hunter harvests. Mortality in wild species is varied with some species like gulls, terns, geese, and raptors experiencing higher than usual rates, while songbirds are relatively unaffected, even asymptomatic. The variation in morbidity and mortality makes this virus even harder to track.

This outbreak stands apart not only because of its impact on wild birds, but because of its effect on mammals. From a captive endangered Amur leopard in New York to dozens of wild red foxes across the continent, and hundreds of harbor seals in Maine—and even a dolphin in Florida. This diversity of mammal cases also contrasts with the 2014-2015 H5 epidemic, where investigations into cross-species spillover risks failed to identify any infections in marine mammals that were being monitored.

Most notably, perhaps, the 2022 season is exceptional for leading to the first confirmed human case of H5N1 in the United States. This spillover occurred in an incarcerated person in Colorado exposed through involvement in culling domestic poultry infected with the virus. The individual reported mild symptoms and fully recovered, but given high case fatality rates—ranging from 50-80 percent since the first confirmed human case in 1997—any confirmed case warrants concern. Prior to this case, the CDC reported tracking over 2,500 individuals with known exposures to H5N1-infected poultry, with none resulting in infection. As of November 4, 2022, a total of 868 human cases of infection with H5N1 and 456 deaths have been reported globally from 21 countries. Most recently, two human cases were reported in poultry workers in Spain following an outbreak on a single farm.

Highly pathogenic H5N1 influenza A (HPAI H5N1) virus emerged in geese in Asia around 1996 and spread in wild and domestic avian species throughout Europe and Africa. By 2005, HPAI H5N1 claimed responsibility for die-offs in wild birds in East Asia and into Europe and has since repeatedly infected wild birds across the globe. In 2014, a new lineage of HPAI H5N1 (referred to as 2.3.4.4) was found to infect but not always kill wild birds, providing the virus ample opportunity to spread into North America for the first time. This lineage has been dominant in outbreaks globally, including what we have seen so far in 2022, which has also involved some localized reassortment of lower-pathogenicity Eurasian and North American lineages.

A pressing question is whether these recent reassortments may be, in part, responsible for the apparent increased transmissibility of the virus to mammals, or if mammalian cases are merely the result of greater spread and opportunity for exposure. What needs to be determined, and quickly, is the "where." In what intermediate host is the reassortment happening?

Each time one species transmits the virus to another, it constitutes a spillover event. These myriad spillovers—among wild bird species, from wild birds to domestic birds, across birds to mammals, and from animals to humans—raise serious concerns about the potential for further adaptation and evolution of this influenza lineage and the continued risk associated with avian migration. Understanding which species among these many hosts may be helping the virus adapt is crucial for targeted surveillance and mitigation efforts.

The annual southern migration of wild birds across various flyways in the late summer and into the fall poses a major risk for continued spread and further spillover, threatening not only wild species but the commercial industry yet again. While the 2014-15 outbreak's spread in commercial poultry was attributed to human movement between affected farms, the 2022 cases have been closely linked to migratory birds' interactions with farms. H5N1 HPAI was reported throughout this past summer in scavenging birds and waterfowl as well as in backyard flocks and commercial producers, indicating a virus that was—and remains—widely present.

Despite this, the outbreak has received limited media or political attention (other than warnings about the likely cost of Thanksgiving turkeys) during this period of COVID-19 transition, escalating inflation, and midterm elections. While surveillance networks are on high alert and teams in Canada and the United States are poised for surge testing, it is critical that we aggressively prepare for continued adverse impacts.

Keeping a Wary Eye on Avian Flu in Europe

This risk is not limited to the United States. Europe experienced an atypical persistence of the virus in wild birds over the spring and summer months leading to mass mortalities in seabird colonies on the coasts of the North Atlantic and North Sea. These outbreaks resulted in official HPAI notifications from fifteen countries this summer. The information we have on the genetic makeup of these viruses from the European Reference Laboratory (EURL) indicates that circulating strains are heterogeneous in their genetic makeup compared with viruses from previous epidemic waves. This suggests that there are a variety of  H5 sub-types present in colonies migrating over continental and transcontinental flyways this autumn. On November 8, 2022, egg producers in the UK warned of possible shortages due to farmers leaving the industry and/or reducing their flock size in response to immense costs and uncertainty caused by the spread of avian influenza.

Flyways from Europe cover parts of west, central, and southern Africa. As with Western Hemisphere flyways, these routes carry attendant risks of spillover exposure and infection throughout their range. Just this year, Guinea reported its first ever confirmed outbreaks of HPAI H5N1 in poultry, which killed over 120,000 birds through disease or culling and led to one suspected human infection. South Africa has reported at least twenty-eight penguin deaths (since August) among 3,000 birds in Capetown's Boulders Beach penguin colony, a popular tourist area. Countries that once had little concern for local transmission of HPAI to commercial poultry should consider mechanisms for enhanced surveillance at key stopover locations and be on alert for potential spillover to people.

The task at hand presents a variety of challenges. A fraction of cases are actually reported and there will be a range of observed lethality in various species, complicating surveillance and epidemiology. There remains the natural challenge that the planet harbors many species capable of being infected and traveling great distances, increasing the chance of spillover. Avian viruses can, and will, mutate and adapt over time, potentially allowing the virus to expand this host range. In addition, genetic reassortment—the combining of two or more influenza viruses into a potential novel strain—is a legitimate possibility with ample precedent among wild and domestic species.

While some level of risk of spillover from avian influenza is ever-present, there are actions we can take and systems we can fortify to be vigilant. First, we must enhance monitoring and testing of wild migratory birds domestically and globally. Wild bird surveillance is challenging, and historically, the U.S. wildlife surveillance budget for this work has been far smaller than the task requires. Framing the risk as an emerging disease in wild aquatic birds–the natural reservoir for all influenza viruses–may be necessary to justify the resources required. We have a chance now in the Northern Hemisphere to scale up surveillance during and after the southern migration and we should take it. Funding should not be our limitation to preventing spillover.

However, consistent funding and data collection alone are inadequate. In the United States, there are known inadequacies in data sharing and information integration between local, state, and federal public health authorities. Specifically, we must link wild bird surveillance and testing to notification systems at state and local levels, including the private sector to reach the poultry industry. This same approach applies to any country that has experienced or has ongoing HPAI outbreaks. Countries new to HPAI that lack influenza reporting systems should utilize surveillance and reporting systems for nationally notifiable diseases to detect and respond quickly to HPAI cases.

For zoonotic diseases like influenza, developing or strengthening systems in one sector will not be sufficient. We must link databases across levels (local, subnational, national, and regional) and sectors (environment, agriculture, health, and private industry), taking a One Health approach. Then we can begin to take measures to prevent transmission among domestic poultry to minimize industry losses, and to reduce spillover risks to humans and other mammals. Such efforts also need to be complemented with epidemiological and laboratory research to better characterize transmission dynamics in all susceptible animal populations, and with work oriented toward a more comprehensive understanding of spillover risk. Maintenance of current levels of funding, surveillance, notification systems, and research won't be enough to ward off the next outbreak.

Ellen P. Carlin is an assistant research professor in the Department of Microbiology and Immunology at Georgetown University where she is faculty with the Center for Global Health Science and Security.


Erin M. Sorrell is an assistant professor in the Department of Microbiology and Immunology and a member of the Center for Global Health Science and Security at Georgetown University.