Go to homepage
Is Fast Food Eating Away at Africa's Progress?
Food

Is Fast Food Eating Away at Africa's Progress?

It is often said that Africa is the future, but what kind of future will it have if its population is unhealthy? 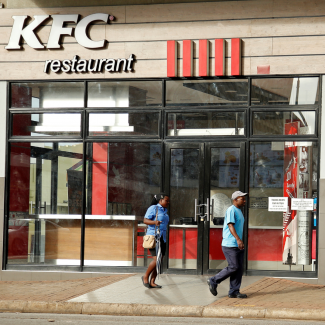 The opening of a KFC franchise, a well-known U.S.-based fast-food outlet, in a busy mall in Nairobi, Kenya, heralded great new possibilities in 2011. Top among them were more employment opportunities and a welcome boost to the local economy. But the new restaurant also symbolized something more for the teens who frequented the mall to shop and hang out with friends. The entry of fast-food franchises meant being a part of the bigger world—one they saw only in movies. They could now enjoy the same bucket chicken wings as their peers in high-income countries. Every weekend, moms and dads from the burgeoning middle class would throng the establishment, with their kids tagging along to enjoy the deep-fried, crispy delights at the end of yet another busy week.

Ten years later, KFC outlets are dotted across Kenya's urban centers and the company has restaurants in twenty-three other African countries. Other global chains, including McDonald's and Burger King, are also part of the African fast-food landscape. Now, many in Kenya, South Africa, Ghana, Nigeria, and other parts of Africa have their pick of fatty, high-calorie foods typically associated with American fast-food chains. But with expanding economies comes an unwelcome development: widening waistlines.

Many African countries now face a looming obesity crisis contributed to by easy access to cheap, processed foods, popularized by fast-food culture and the sedentary occupations associated with advances in technology that can cut down on physical labor.

But high obesity rates were not always the case for people in Africa. Just three decades ago, obesity and being overweight were conditions more common in high-income countries. In 2021, a World Health Organization (WHO) report showed that between 1991 and 2016, the number of overweight children across Africa doubled, increasing from 5.4 million to 10.3 million. Rates of obesity and overweight were up for adults, too. Data from the Institute for Health Metrics and Evaluation at the University of Washington (IHME) revealed that in the years between 1980 and 2017, Ghana's obesity rate had jumped more than 650 percent—growing from less than 2 percent of the adult population to more than 13 percent. Kenya's obesity rate has also risen exponentially during the past three decades, increasing by more than 100 percent since 1990.

Being well-off financially is also linked to being overweight. One study suggests that women from higher socioeconomic backgrounds in Kenya are more likely to be overweight. In South Africa, wealthier men were heavier, according to other research.

Unless something is done to curb the overconsumption of fast food and encourage regular exercise, the number of people who are overweight and obese could continue to grow in the coming years, wreaking havoc on the health of many people living in Africa and on health systems.

So, how can Africa address the health drawbacks of fast food? Africa's leaders should take a proactive role in protecting their citizens by increasing funding for health education. While it may be difficult to turn down fast food businesses due to the economic advantages associated with their entry into local markets, governments should raise awareness of the risk factors associated with diets high in processed foods.

One successful program that could be adapted for Kenya and other African countries is the United States' Expanded Food and Nutrition Education Program (EFNEP). EFNEP is a federally funded program that offers nutrition education to communities with limited resources.

Negotiating stronger barriers to entry for foreign enterprises is another option for policy makers.  Low and middle- income (LMIC) countries, who often have weaker economies and more fragile political systems, and in turn, have the least bargaining power and are often overridden by more powerful countries in trade negotiations. To remedy this trap, leaders across Africa should take a more active role by forming coalitions that call for trade concessions for the entry of fast-food chains in Africa—including the regulation of how processed foods are marketed to consumers, requiring multinational corporations to source raw materials locally to stimulate local economies, and introducing corporate taxes that could raise funds to improve countries' health sectors.

Judith Mwobobia is a Master’s in Global Health student at Duke University.