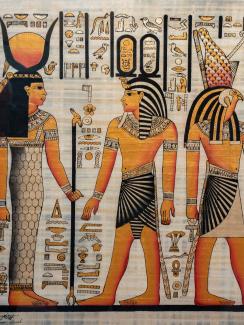 Copy of an old papyrus seen in a souvenir shop in Cairo Egypt. Female genital mutilation is an archaic practice that most likely originated in Pharaonic Egypt. GETTY/Izzet Keribar
by Mahnaz M. Harrison and Mark P. Lagon April 8, 2020

The CDC estimates some 513,000 girls and women in the U.S. are victims of or at future risk of female genital mutilation

The tendency is to think about responses to female genital mutilation using a legal framework. While laws and law enforcement are necessary responses to this harmful practice, they are woefully insufficient. Even in the remotest, most tradition-bound areas of Kenya, this assault on the physical and emotional well-being of girls is illegal. The practice reflects deep-rooted inequalities between the sexes and constitutes an extreme form of discrimination against women.  However, because female genital mutilation is a silent crime, seldom discussed beyond the spheres of family and community, it rarely makes its way into the public space where law enforcement can be effective.

Because female genital mutilation is a silent crime, it rarely makes its way into the public space where law enforcement can be effective

Once framed, female genital mutilation requires an integrated strategy that accounts for tradition and cultural norms that perpetuate this practice. Few traditional practices afflicting women and girls are more horrific in terms of their effects on someone’s health, psyche, and economic well-being.

Another tenet of the strategy is to bring this shrouded crime out in the open, using awareness campaigns. Girls subjected to cutting are shamed if they speak of it. In an unvirtuous cycle perpetuated across generations, mothers hold their daughters down to be cut so they will become marriageable, which in turn means they must drop out of school. While the community celebrates the rite of passage, those speaking of it are shunned and the girls suffer through the associated agony in silence and solitude. The practice thrives as no one is told and there is no written record allowing the community to pretend it never occurred. Cultural and societal beliefs, which obscure the truth about the practice being an emotional, psychological and health risk to the girls, are a major barrier to eliminating this harmful practice.

Finally, the strategy must employ approach of modern public health campaigns. According to the WHO, female genital mutilation affects three million girls across the globe every year—one every ten seconds—and is the leading cause of school dropout for girls. Moreover, it contributes to medical complications, such as infection and maternal deaths during childbirth, and is a blatant violation of the girls’ rights to health and safety. In 2016 UNICEF reported on the practice’s significant scale and persistence and the need to intensify efforts to eliminate it. The practice is spreading due to refugee and other migration flows. Female genital mutilation is now widely practiced in traditional communities in the developed world. As it is with any public health issue, sufficient and evidence-based data that demonstrates the gravity of the problem and the health consequences of this practice is needed.

As we experience global population growth and waves of northward migration, elimination of female genital mutilation deserves high prioritization. The time is now to stand up against this shrouded crime, once and for all. What better way to commemorate the 25th anniversary of the Beijing Declaration, on Women’s Rights than strategic action against female genital mutilation?  February 6, 2020 was the International Day of Zero Tolerance for female genital mutilation and the theme for this year’s International Women’s Day on March 8 was building a world that is gender equal (#EachforEqual).  How can we envisage a gender-equal world without eliminating the practice, which has traumatized 200 million women and girls in the world according to the WHO?

EDITOR'S NOTE: One of the authors (M.H.) is the founding CEO and President of LastMile4D, an NGO whose work is described in the third-to-last paragraph of this essay.


Mark P. Lagon is the chief policy officer at Friends of the Global Fight Against AIDS, Tuberculosis and Malaria, and an adjunct professor for Georgetown University's Master of Science in Foreign Service Program. He served as a U.S. Department of State official for international organizations and for combatting human trafficking.

An Improbable Success in a Troubled Region