When Farmers Can't Put Food on the Table 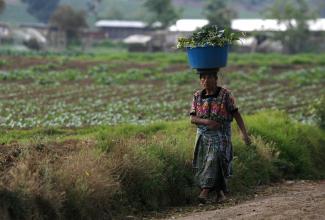 A woman carries vegetables from the field at the end of the day in Tecpan, Guatemala, on May 5, 2008. REUTERS/Daniel LeClair
by Isabella Rolz October 18, 2022

Chiquimula, Guatemala, located in the eastern part of the Central American country, is home to 415,063 inhabitants, mostly Indigenous, who speak Ch'orti', a Mayan language. It is a mountainous region with numerous rivers, but it has faced years of drought and unpredictable weather conditions that have decimated harvests and livelihoods. The poor of Chiquimula, including farmers, are the most vulnerable, and their need for food assistance is increasing.

Two seemingly unrelated factors have increased food insecurity in Guatemala; the war in Ukraine and the climate crisis have left approximately 4.6 million at risk and struggling with food security, according to data from the integrated food security phase classification (IPC). Eating three times a day is something families living in Chiquimula are unfamiliar with—approximately 24 percent of Chiquimula's residents fell into food insecurity in March, and they are expected to continue suffering from severe hunger for the remainder of 2022.

Over 80 percent of Chiquimula's population lives in extreme poverty and earns less than one dollar per day. Nicolas Amador, 68, is a typical family man from the area devoted to subsistence farming—most of the food he grows is used to support the food needs of his own family. He is the father of ten children and his family has suffered from malnutrition, like 60 percent of the population in Chiquimula, according to the National Institute of Statistics (INE). Amador is one of the approximately 1.86 million people from Guatemala who work in the agricultural sector and produce corn for their household’s daily consumption.

"In my village, most of us are devoted to agriculture. We are poor and we know it... but this is what our parents taught us to do for our survival and that of our families," shared Amador, whose modest home is built out of sheet metal and has no electricity or water service. With the maize he harvests, his wife and daughters make tortillas, corn atole, and tamales.

"When we have money available, we go to the local market to buy other foods to combine with the corn," he said.

The Effects of Climate Change in Guatemala

Every year in Central America, there is a rise in the percentage of the population facing food insecurity from June through October, said Abelardo De Anda Casas, a researcher in economics at the University of Oxford, in England.

"It coincides with the canícula, which is a period of drought in the rainy season," he added.

Guatemala is the second most vulnerable nation in Latin America to the effects of climate change, according to the Food and Agriculture Organization of the United Nations (FAO), which also forecasts that by 2050, rainfall in the country will decrease by up to 12 percent. Environmental degradation directly impacts crop quality and food security, aggravating poverty, and resource scarcity among the population.

De Anda Casas says this year is particularly worrisome when compared to previous ones due to the ongoing conflict between Russia and Ukraine. The war has led to increases in the price of fertilizers that farmers like Amador rely on to grow their corn. Sixty-four percent of these fertilizers come from eastern European countries, including Ukraine, according to data collected by the Guatemalan National Bank.

"Fertilizers are twice as expensive as last year, which has given me problems with my yield not being sufficient. Plus, I am suffering from watching my family go through hunger," said Amador.

At least 2.5 million people experienced food insecurity in Guatemala in 2021. Throughout 2022, this number has doubled due to the increase in the price of fertilizers used to harvest staple grains such as maize or beans, but the climate crisis has led to food insecurity, too, said Mario Garcia Lara, economist and executive director of the 2020 Foundation, a nonprofit organization in Guatemala that focuses on social development.

Like Amador, Ezequiel Arriaza, 56, another farmer from Chiquimula, is responsible for feeding a large household—in his case, twenty-five people. "My biggest concern is not being able to nourish my family," he said.

Due to this year's prolonged series of droughts, which have lasted up to six weeks, Arriaza said, "The harvest has not been the same, and I do not have enough grain supply for the rest of the year."

The farmers also need seed to plant for the year ahead. An alternative is to buy corn seeds instead of planting their own harvested from last year's harvest. However, this is not an option because the price of corn seed has increased, according to Gustavo Rivas, president of The National Association of Basic Grains of Guatemala (ANAGRAB).

At least 2.5 million people experienced food insecurity in Guatemala in 2021

Guatemala does not rely on Ukraine for grain imports—most maize is imported from Mexico—but farmers in the Central American country, do rely on fertilizers from Ukraine during the planting season. "Higher prices for imported grain and higher production costs due to the rise in the price of fertilizers translates into higher food prices, making them less affordable," said Wolfgang Pfeiffer, global director of product development and commercialization at HarvestPlus.

Manuela, Ezequiel Arriaza's wife, said that on a recent trip to the local market, she was unable to buy corn with which she intended to cook the tortillas. "Once I got there, I realized that the price had gone up to about 40 percent than before. I had to leave the market empty-handed and upset because I simply cannot afford to pay these prices," she said.

Regardless of the causes of food insecurity, bold and urgent actions are needed to alleviate this situation. According to De Anda Casas, "During food emergencies, an immediate solution that countries should consider is increasing the amount of cash transfer programs. This strategy has several advantages because it gives individuals autonomy over how they decide to spend this money."

Then, for example, farmers could decide to use it for fertilizers or purchase staple grains. However, this solution is effective only if there is successful coordination between local governments, community representatives, and non-governmental organizations (NGO).

Mario Lopez, 58, is one of the sixty-two community leaders of Chiquimula. Lopez is currently the president of the Aprocafil Association, a farmer's organization. "This year has been pretty challenging for farmers. We have not been able to cover the needs of our people so far. The most practical solution would be to receive immediate cash transfers," he said and indicated that currently, Guatemala only allocates 2 percent of its gross domestic product (GDP) to fight malnutrition.

"This amount is simply not enough," Lopez said.

Among other solutions is implementing a nutritious and climate-resilient type of maize seed that can maintain high micronutrient content and yield stability under various environmental conditions, according to Pfeiffer. This "requires a concerted effort among public and private stakeholders, and government support to ensure supply, by building local capacities and developing the seed value chain, stimulating demand, and advancing the enabling environment," he said.

Semilla Nueva, an NGO operating in Guatemala, is helping vulnerable farmers by donating a new kind of biofortified corn seed called Fortaleza (F3), which is more resilient at combating food insecurity and climate change effects. Throughout this year, 10,600 families have received the F3, and Semilla Nueva expects to increase yields by 30 percent compared to last year.

Both Arriaza and Amador are using F3 and have noticed the benefits already. While Arriaza and his wife said "with the seed which is more abundant, we can prepare more tortillas. So, we do not go hungry for the entire day and prepare bigger amounts of tortillas."

Amador said that he has noticed that it is more resistant to climate change. "For example, when we have long periods without rainfall, yields are higher and last more," he said.

"Our consumption surveys from 2021 evidenced how 64 percent of the farmers who used our seed stated that they had been affected by the effects of climate change in their region and 95 percent of them said that this seed resisted better," said Curt Bowen, Semilla Nueva's executive director.

Additionally, the F3 seed can produce higher yields of grain with the same amount of fertilizer. "Being aware of the rising prices, farmers will lower their spending on fertilizers for their maize when using this new kind of seed that grows and yields a satisfactory amount of corn," said Bowen.

Places like Chiquimula are at the forefront of the climate and food crisis and need support to adapt to the impact of the war in Ukraine. Therefore, "it is urgent to invest more in the root causes of it. Partnerships between governments, the private sector, and the international community can drive innovation, stimulate investments in rural areas, create employment opportunities and build long-term resilience," suggested Lola Castro, regional director for Latin America, and the Caribbean at the United Nations World Food Programme (WFP).

"To get through this food crisis and climate problems caused by the war in Ukraine, the Guatemalan government should resort to a combination of policies that target vulnerable populations. Instead, it has focused on subsidizing gas and electricity, which has proven inefficient because it does not benefit the impoverished, which account for more than 80 percent of the population," said 2020 Foundation economist Garcia Lara.

Isabella Rolz is a freelance bilingual journalist who covers Central America, poverty, immigration, and other social issues. Her work has also appeared in The Washington Post, The Daily Beast, Positive News, Univision, and other media outlets.