Go to homepage
Seeds: An Unlikely Casualty of the War in Ukraine
Food 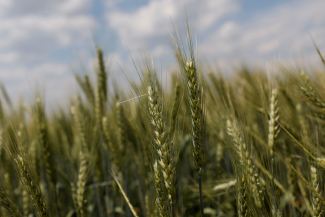 As Russia's attack on Ukraine continues, a field of winter wheat grows outside Bashtanka, in the Mykolaiv region of Ukraine, on June 9, 2022. REUTERS/Edgar Su
by Mary Brophy Marcus June 9, 2022

In mid-May, an important scientific facility in Ukraine that houses valuable seed and plant species, was reported to have come under Russian fire. The Ministry of Foreign Affairs in Ukraine tweeted, “In #Kharkiv, due to the #Russian shelling, the one and only #Ukrainian Gene Bank of plants was burned down. 160K of seed samples have been wiped out, including unique ones that wonʼt be restored. The institution survived WWII but was destroyed by the #Russians."

Questions still remain about the details of the attack and the extent of loss at the National Center for Plant Genetic Resources of Ukraine, but the report raises questions about how damage to a national seed bank might affect national and international food security. We spoke with Purdue University's Tesfaye Mengiste, professor of botany and plant pathology, to learn more.

Think Global Health: What is a seed bank?

Think Global Health: Where are seed banks exactly? Are they sprinkled all over the world?

Tesfaye Mengiste: Most countries have seed banks. They are all over the world—the United States has more—but there are thousands and thousands of seeds of plant species. And within species there are various variants, different kinds that are collected and preserved. Not only domesticated crop plants that are in current use, but also the wild relatives of those plants. For example, wheat for breads. There is also wheat for pasta. There are progenitors of these plants which are in the wild and are not domesticated but have very useful traits. Sometimes you don't have those traits in the domesticated species so you go back to wild species [that have been stored in seed banks] and bring those traits into the cultivated ones.

Seed and plant banks are normally under the radar and underappreciated, but they are what drives global crop improvements and food security

Think Global Health: What would be an example of a wild trait that you'd want to cultivate?

Tesfaye Mengiste: A very good example would be the tomato. The domesticated tomato has been improved for fruit size and disease resistance. And during that process, the flavors were bred out. And those flavors are sometimes important for the plant to defend itself [the flavor may ward off certain pests, for example]. If you want to improve that flavor, you go back to the wild one, which has the original flavor.

Drought tolerance, when there is not enough water, is another example. It is a serious problem. So maybe the current plant did not improve plants for drought tolerance, but in the future for climate change, we will want to. Where do you get those traits? From the wild species that have adapted to survive under those conditions. That's why seed and plant gene banks are important. You'll want to go back and get those traits [from seed banks].

Think Global Health: How do seed banks work in the scientific community? Are they mostly there for national needs, or accessible to the international community?

Tesfaye Mengiste: They are all over the world, and sometimes there are international agreements to share them. Some countries also consider them to be protected wealth.

What is special these days is that there are a lot of technological advances, such as whole genome sequencing. We know the blueprint—what makes a plant good, or what underlying trait is good. We can sequence those germ plasm [the seeds, plants, or plant parts used in crop breeding, research, and conservation] and we can catalogue them and we know we can make them ready for improvement.

Think Global Health: Is there any one seed bank that houses all the seeds and plants in the world?

Tesfaye Mengiste: There is not one bank for everything—some are bigger, some smaller. But the Svalbard Global Seed Vault, opened by the Norwegian government, has seeds from thousands of varieties of food crops, including beans, wheat, rice.

But there are hundreds and hundreds of seed banks around the world that contain a lot of different plant species, and different varieties. And some are smaller, some larger. The goal is to preserve the genetic material for agricultural crop use or even pharmaceutical use that drug developers can use. There are tropical plants that are full of compounds of potential medicinal value and we need to preserve this genetic material. Not only those plants but microbes, fungi, bacteria from those collections have potential use for medicines. Malaria medicine for example, an anti-malaria drug, was discovered from a medicinal plant in China. The scientist who discovered it [Tu Youyou] won The Nobel Prize.

Think Global Health: What does an attack on the seed bank in Ukraine mean for Ukraine, and for the rest of the world?

Tesfaye Mengiste: The destruction could be significant because they had hundreds of plant species and variants. These are potentially important not only for Ukraine's agriculture, but also for agriculture around the world. Gene banks work in that they collect seeds and plants that are very important to their regions—that are adapted there locally. There are these places called centers of origin and genetic diversity. For example, the potato originated in Peru in the Andes Mountains. If you go there you don't only see the improved potato but very different kinds of potatoes, with different tubers, shapes, colors. So Ukraine probably has similar material important for agriculture, but also important for global improvement. Where do those improvements or better yielding varieties [of wheat and other crops grown in Ukraine] come from? It's from agricultural breeding work and improved croplands. And if there is no genetic variation and if there is no gene bank or germ plasm, the breeders don't have a resource. If you are looking for a disease resistance trait, you have to have plants that are resistant somewhere in the world that you can cross and transfer the traits to.

Think Global Health: Does this have implications for wheat growing around the world? And will we see the repercussions soon?

Tesfaye Mengiste: We will see the repercussions more in the future because of global population increases and climate change. For yield to be increased, the current crop varieties will need to be more improved. So where do those improvements come from? From those germ plasm resources.

These things are normally under the radar and they are underappreciated, but they are what drives global crop improvements and food security. It is these crops that make a big difference in terms of whether a country will be hungry or not. Food self sufficiency is hugely important and there are countries where that's a major problem. These gene banks, or germ plasm collections, are what drive crop improvement.

It is clear that because Russia and Ukraine are major exporters of grain that there is an immediate impact. But the long-term impact is the loss of these collections—these gene banks. These seeds.