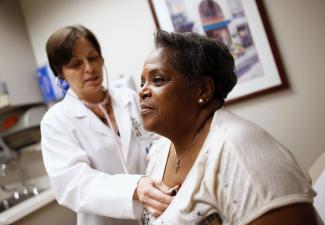 During COVID-19, when unexpected health problems crop up, timely access to hospitals and emergency care is critical—and a sign of a functioning health system. But primary health care, including regular checkups and office visits with general practitioners, is crucial, too, for preventing disease, slowing progression of existing conditions, and improving well-being. And there is longstanding evidence that high-quality primary care improves health.

The United States, however, has a primary health care problem: it lags far behind other high-income nations when it comes to providing primary health care for all, particularly for Black and Hispanic individuals. This translates to inequitable health outcomes by race and ethnicity. People who are Black and Hispanic tend to use primary care less than those who are white. The reasons include barriers to accessing care, lack of timely and quality care, and the absence of insurance coverage. These challenges are rooted in structural racism across the U.S. health-care system.

In 2016, the United States spent 65 percent more on primary care for each white person than for each Hispanic person

Inequitable Spending by Race and Ethnicity

A study from the University of Washington's Institute for Health Metrics and Evaluation found that health-care spending varies substantially by race and ethnic groups. Spending patterns are based on the types of places people tend to seek health care—at outpatient clinics or at emergency departments and hospitals.

The United States spends much more on primary health care for white people than it does for Black and Hispanic people. For example, in 2016, the United States spent 65 percent more on primary care for each white individual than it did for each Hispanic individual. That same year, it spent 44 percent more on primary care services for each white person than it did for each Black person. However, the United States spends more on emergency department visits and hospital inpatient care for Black patients compared to Hispanic and white patients. While estimated emergency department and hospital inpatient care spending per person among Hispanic and white individuals was relatively similar, spending per Black individual was nearly 20 percent higher than the average amount spent across all race and ethnicity groups combined.

Spending on Primary Care by Race, 2016

What drives higher primary care utilization and spending among white people relative to Black and Hispanic people? One factor that explains these stark disparities is lower rates of insurance coverage among Black and Hispanic individuals, who are more likely to work blue-collar, low-wage jobs than white individuals. This lowers the chance a person will have employer-sponsored health insurance and increases the risk of lower socioeconomic status.

Between 2000 and 2014, Black and Hispanic young adults were less likely to have insurance coverage compared to white non-Hispanic young adults, and were also less likely to report a "usual source of care” (for example, a primary care physician) that was not the emergency department, and at least one doctor's visit. After the Affordable Care Act (ACA) expanded in 2014, research showed that people nationwide were more likely to have a usual source of care that wasn't the emergency department and at least one visit with a general practitioner. The ACA also helped narrow disparities in insurance coverage among Hispanic and Black individuals relative to white individuals.

Persistent residential segregation and the enduring effects of unjust Jim Crow laws also play a role in making Black and Hispanic people less likely to use primary care compared to white people. Overt discriminatory segregation is illegal now, but policies rooted in structural racism translate to racial and ethnic minority groups experiencing inequitable access to resources ranging from heath care to education. This limits opportunities for both upward mobility and better health. For example, in neighborhoods comprised mostly of minority communities, access to health care and treatment quality may be lower. Health care providers also may be less well-trained, and they may face more obstacles in providing high-quality treatment in care centers that serve predominantly Black patients. Institutions that operate in low-resource neighborhoods may be more likely to close down due to economic instability, making it harder for residents to experience consistent access to health care.

Within the health system, interpersonal racism and discrimination—both conscious and unconscious—influence whether or not people seek out primary care services. Language barriers during medical appointments, including a lack of interpretation services, can result in poor communication, missed critical knowledge, and feelings of reduced self-efficacy among patients. Health care providers may have implicit biases toward Black and Hispanic individuals, which can lead to assumptions that negatively impact the quality of their interactions with patients, as well as the quality of the health care patients receive.

In 2018, while nearly 20 percent of Americans were Hispanic, only 5 percent of physicians identified as Hispanic

When Black and Hispanic individuals experience discrimination, it reinforces a pattern of mistrust in the health care system. Lack of trust can also cause people to delay seeking health care, making them less likely to get regular checkups, and more likely to wind up in the emergency room or to be admitted to the hospital once they eventually seek care. Fortunately, there is increasing awareness of these biases among health systems and health-care providers, but more work remains.

These findings on primary care spending by race and ethnicity identify an important opportunity to reduce health disparities. But in order to address this issue, we need improved routine data collection to better track these disparities, further investigation of the factors that drive disparities in health-care utilization, and policy action. While racism is deeply ingrained in the U.S. health system, actionable policy steps could make it less difficult for racial and ethnic minority groups to access primary care. For starters, policymakers must address the well-established disparities in insurance coverage by race and ethnicity, tackle issues of resource allocation inequities across racially segregated areas, restructure clinical guidelines to foster high-quality care, and improve medical providers' diversity and cultural competence. To boost access to primary care and make sure everyone receives timely access to quality emergency department and hospital inpatient care, policymakers need to invest in resources that disrupt the structural forces that allow health inequities to persist.

ACKNOWLEDGEMENTS: The authors would like to thank Rebecca Sirull for fact-checking assistance.

EDITOR'S NOTE: The authors are employed by the University of Washington's Institute for Health Metrics and Evaluation (IHME), which leads the disease expenditure research described in this article. IHME collaborates with the Council on Foreign Relations on Think Global Health. All statements and views expressed in this article are solely those of the individual authors and are not necessarily shared by their institution.

Azalea Thomson is a third year post-bachelor fellow at the Institute for Health Metrics and Evaluation where she works on the Neonatal and Child Health Team.


Joseph L. Dieleman is an associate professor at the Institute for Health Metrics and Evaluation (IHME) at the University of Washington.