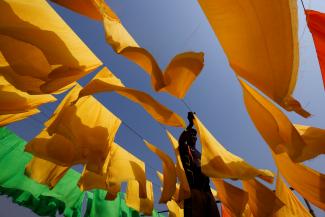 A worker dries fabrics at a dye factory in Narayanganj, Bangladesh, on March 9, 2022. REUTERS/Mohammad Ponir Hossain
by Tasnim Ahmed November 9, 2022

Ibrahim Mia sits hunched over and cross-legged on his bed, rocking back and forth to distract from his pain—it’s time for his next dose of morphine.

Every two weeks, Robel Mia takes a four-hour bus journey from Dhaka, Bangladesh, to his home village, Cumilla, to bring morphine tablets to his ailing father, Ibrahim Mia. Six months ago, Ibrahim, in his late sixties, was diagnosed with terminal stomach cancer. Without his pain medication, Ibrahim's debilitating pain leaves him bedbound.

"Pain is the only disease he knows," Mia said about his father.

While the United States grapples with an opioid addiction epidemic fueled by patients' unfettered access to prescription opioids, people in low- and middle-income countries like Bangladesh struggle to fill their prescriptions.

While the United States grapples with an opioid addiction epidemic, medical patients in low-income countries struggle to fill prescriptions

In the country of nearly 168 million people, access to morphine, one of the cheapest opioids, is severely limited. According to Fazle-Noor Biswas, an oncologic pharmacist at Square Hospital in Dhaka, an oral form of morphine can be found in only ten hospitals in Bangladesh, all of which are in the capital city of Dhaka. For those who live outside of Dhaka, morphine is a distant luxury. If patients do manage to reach a pharmacy that can legally provide morphine, there's no guarantee that it will be in stock.

Rigid government regulations on manufacturing opioids, physician hesitancy to prescribe morphine, and high costs for permits to sell it are the roadblocks to accessing morphine for those who need it the most. But each factor stems from a longstanding stigma toward opioids—one that has been exacerbated by lessons learned from the West's opioid crisis.

Physician "opiophobia"—a hesitancy to prescribe opioids out of concern that patients will become addicted or overdose—is a multifaceted issue. This hesitancy is warranted: over 100,000 Americans died between May 2021 and May 2022 from an opioid overdose, fueled by misuse of prescription opioids.

However, morphine can also be a powerful and beneficial drug in the treatment of severe pain. In Bangladesh, the pendulum has swung so far in the opposite direction that patients suffering from pain receive inadequate treatment.

Felicia Knaul, a professor at the University of Miami Miller School of Medicine and whose research focuses on access to pain relief and palliative care, said that “without question,” the Western opioid epidemic has worsened access issues in poorer countries.

Knaul compares the opioid epidemic to the obesity epidemic.

"Of course, we should be worried about obesity anywhere in the world, but the obesity problem in the United States […] we don't solve by starving people," she said.

Nejamuddin Ahmad, a former chair of the department of palliative medicine at Bangabandhu Sheikh Mujib Medical University Hospital, in Dhaka, believes the primary challenge is availability. He points out that the current attitudes toward morphine in Bangladesh have prevailed for decades, independently of the West's opioid epidemic.

Knaul believes the global community needs to strike a balance between placing checks on opioid prescriptions without compounding access issues in low- and middle-income countries. She suggests that one way to do so is by removing the profit margin for producing off-patent morphine.

"We basically need to pay people to produce off-patent morphine," she said. "Nobody wants to produce it because there's no profit margin."

Similarly, the Stanford-Lancet Commission on the North American Opioid Crisis, published earlier this year, also calls on World Health Organization (WHO) to fund the production of morphine so that individual pharmaceutical companies do not influence prescribing patterns.

Regarding the procurement of morphine for low- and middle-income countries, Gilles Forte, a policy coordinator of WHO's Essential Medicines and Health Products department, said "It is an important mandate for [WHO] to support those countries, assess their needs, strengthen their capacity, and provide some specialized technical assistant when it comes to procurement of medicines."

However, the burden to act shouldn't rest solely with WHO, he said, suggesting that the initiative should be a joint effort from various groups concerned about the morphine shortage.

Morphine availability in Bangladesh is not just a supply-side issue.

Tofazzul Hossain, an assistant general manager at UniMed UniHealth Pharmaceuticals, one of only two pharmaceutical companies that manufacture morphine in Bangladesh, says that lack of facilities and resources aren't the problem—demand is.

"Lack of facilities and resources aren't the problem—demand is"

Hossain said that because very few physicians prescribe morphine, pharmaceutical companies have little financial motivation to make more. Add to that the high cost of multiple special licenses required for the sale and transport of morphine. Morphine just isn't as lucrative as other medications.

"It's very tough to get the licenses, so why should pharmacy owners be interested in selling morphine?" Hossain said.

To make up for the profit loss, Hossain said that Bangladeshi pharmaceutical companies end up overcharging morphine: an immediate release tablet in Bangladesh will cost around $0.10, but a tenth of that in India.

"The basic issue lies with lack of education and training among doctors and nurses on morphine," said Ahmad.

Policing the Morphine Supply in Bangladesh

"In Bangladesh, every drug is over the counter," said Biswas, referencing the open secret that prescription medications are easily bought without prescriptions in Bangladesh. Pharmacy storefronts line every busy street in Bangladesh, where antibiotics are bought just as easily as a stick of gum.

Aware of the predicament this presents in trying to regulate the sale of controlled medications, such as morphine, the Department of Narcotics Control (DNC) in Bangladesh instead focuses on restricting the manufacture of it.

While the DNC website says that morphine has low evidence for abuse potential, it still heavily limits how much morphine it allocates to each hospital. For example, Square Hospital, one of the largest private hospitals in the country, only receives a yearly supply of 10,000 10 milligram (mg) pills and 15 mg pills each—not enough to guarantee that each cancer patient that comes through the hospital can get what they need.

To further limit the potential for drug abuse, the DNC requires that pharmacies go through a lengthy application process every three months to receive their supply of morphine. It is a process slogged by bureaucracy that often leaves these pharmacies with morphine shortages as they await approval. The DNC declined a request for interview.

For Mia, it can mean that his father doesn't receive enough morphine pills to last him until the next refill.

"Sometimes [the pharmacy] can't give me enough morphine. The doctor prescribed 150 morphine [tablets] but sometimes they give me only 60 or 70," Mia said about his last visit to the pharmacy.

When stocks are low, Biswas says he tries to ration what is available so that patients can get some portion of their prescriptions filled.

According to the International Narcotics Control Board (INCB), Bangladesh requires an estimated 100 kilograms (kg) of morphine a year for medical patients, yet only about 26 kg of morphine was available in the country in 2021.

"We need more morphine tablets, more injections, and more syrups because […] it’s not enough for the whole of Bangladesh right now," said Biswas.

Biswas believes that even the INCB's calculated 100 kg is an underestimate. Using the INCB's guidelines for approximating a country's requirements for controlled substances, Biswas estimates that a minimum of 530.1 kg of morphine a year would actually be required to adequately treat pain patients in Bangladesh.

In 2020, the Department of Narcotics Control in Bangladesh recorded that only 13 kg of oral morphine was consumed—a tiny fraction of the calculated need.

"Palliative Care is a Luxury"

The story of inaccessibility to morphine is incomplete without mentioning the slow rise of palliative care in low- and middle-income countries. The discipline of palliative care was first introduced in Bangladesh in 2007 in a movement led by Ahmad, but acceptance has been torpid.

"Palliative care is a luxury in Bangladesh," Chowdhury said.

Palliative care emphasizes the treatment of symptoms associated with severe diseases, with pain control being an important domain. Few hospitals in Bangladesh offer palliative care services and those that do are in Dhaka. People who live outside of the city are unlikely to receive palliative care. In its place is an outdated philosophy that emphasizes tolerating pain instead.

People believe "you have to tolerate the pain. You cannot take too much morphine, it is harmful for you," Biswas said about patients and some physicians alike. Biswas frequently finds himself trying to convince patients that it is appropriate and beneficial to receive pain relief.

Receiving palliative care has transformed Ibrahim Mia's life with cancer, but the path to getting it was not easy.

"The government needs to give less restrictions for getting morphine," said Robel Mia. Without it, he feels that the people of his country will continue to suffer.

Small steps are now being taken to close the pain gap. In March of this year, the government began to fund training programs in palliative care for health-care providers working in public hospitals.

As the Bangladeshi government takes interest in morphine availability and begins taking steps to understand how drastic the need is for the pain medication, Ahmad is hopeful for the future of access to morphine in Bangladesh.

"As the journey has started, it is not going to stop, it's going to move forward, but at what speed? That remains the question," Ahmad said.

Tasnim Ahmed is a fourth-year medical student at Stanford School of Medicine and the 2021-2022 Stanford Global Health Media Fellow.

The U.S. capital's opioid crisis is fueled by a lack of comprehensive public policy