Inside Wuhan’s massive COVID-19 testing campaign, which China is expected to repeat elsewhere—just not with antibodies 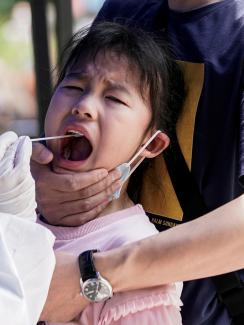 A child reacts while undergoing nucleic acid testing in Wuhan, the Chinese city hit hardest by the coronavirus disease (COVID-19) outbreak, Hubei province, China, on May 16, 2020. REUTERS/Aly Song
by Yanzhong Huang May 28, 2020

When it comes to policymaking in China, even experts on the country have to think big under normal circumstances. All bets have been off when it comes to policy changes within China during the coronavirus pandemic, and we have already seen gobsmacking moves like the Wuhan lockdown—the largest quarantine in human history. Even so, the jaws of China experts dropped this month when the Wuhan Health Commission announced on May 11 that the city would launch a major campaign to conduct nucleic acid testing on the nearly ten million residents within ten days.

In making the announcement, the local government was responding to the discovery of a cluster of six new confirmed cases in two days since the lifting of the lockdown measures and an earlier central government decision to expand the scope of COVID-19 testing in high-risk regions.

Even so, the scale of the proposal was shocking. The emphasis on ferreting out asymptomatic carriers by performing nucleic test on every person surprised and puzzled many people at the outset—and far more when they actually pulled it off.

Inside the Largest Testing Campaign Ever

Between April 8 and May 15, local health authorities had already identified a total of 665 asymptomatic carriers and 2,508 close contacts, among whom only two close contacts later became asymptomatic carriers, and none were transformed into confirmed cases. “Expert opinions, state policies, statistical data all point to the fact that Wuhan is safe,” said a local newspaper.

Indeed, prior to mid-May, a great deal of discussion focused on using targeted antibody testing to achieve economic and social reopening. Instead of spending nearly 2 billion yuan (about $28 million) on testing everybody, public health experts claimed, it would be more cost effective to target high-risk communities and priority population groups (e.g., workers in the service sector). Others questioned whether the city had sufficient testing capacity to fulfill the set policy goal. Between April 8 and May 10, the city had performed 1.54 million tests, on average testing 46,600 people a day. The testing capacity had peaked on May 9, when nearly 60,000 tests were conducted. Even with the involvement of third-party testing agencies running at full capacity, which would mean an additional 100,000 tests per day, it would still leave a huge gap in meeting the goal set in the May 11 announcement. So those who didn't question if the testing was even needed doubted whether it could even be done.

But by late May, the government had managed to beat the odds and prove the doubters wrong. State media reported that between May 15 and May 24, Wuhan collected nine million samples and conducted 6.5 million tests. This makes the U.S. record pale by comparison. (Between the onset of the outbreak and the end of April, the U.S. had conducted a total of 5.7 million COVID-19 tests).

Test Pools—The Secret of Their Success

How did Wuhan accomplish its ambitious objective?

As I illustrate in my forthcoming book, Toxic Politics, mass campaigns are nothing new to China. By setting a clear goal with a measurable outcome and by mobilizing the dual forces of society and bureaucracy, mass campaigns offer an ad hoc, stop-gap solution to impending policy challenges in China. As my colleague Liz Economy noted long ago, such campaigns rarely lead to the employment of the best set of technologies or incentives for behavioral change. But in this case, policymakers did utilize new technologies in order to hit their policy targets.

During the Wuhan mass testing campaign, the local government prioritized a new method developed by German scientists to test for COVID-19. Chinese scientists suggested that samples from five to ten individual people be pooled and tested together in a single tube. That way the ten separate samples only needed to be tested individually if the pooled test results were positive. Provided that only a few people are infected, this “pool testing” approach enabled the city to significantly expand its testing capacity. Between May 15 and May 22, testing capacity in the city increased more than 13-fold, from approximately 114,000 to nearly 1.5 million per day.

In the end, the campaign identified a total of 218 asymptomatic carriers, or fewer than 3 cases per 100,000 population. Compared to previous test results (208 per 100,000 population for April 1-7 and 41 for April 8-May 10), the infection rate was extremely low and the total number of asymptomatic carriers was rapidly shrinking. Once again, the campaign suggested that threats of large-scale asymptomatic transmission in the city are extremely low.

The Flaws in the Results

The campaign, of course, cannot identify all the asymptomatic carriers in the city. Researchers suggested that the nucleic acid test have a false negative rate of 5 percent in the city. The use of throat swabbing (rather than the standard nose swabbing) and pool testing (which may lead to missing some positive samples) could further reduce the sensitivity of the nucleic acid testing.

Equally important, the way the government promotes the test results may create a false impression in the public’s mind that testing negatively earns them a “safety pass” in their daily lives. Compared with antibody testing, nucleic acid testing is effective at detecting active infection in the population, particularly in the early stages. But given the risk of imported cases, there is no guarantee that one person who’s tested negative during the 10-day period will not become infected anymore. Only those who have anti-virus antibodies in their blood may have the immunity to protect them from being infected again and won’t transmit the virus to others.

Lack of foot traffic might be costing the Wuhan economy more than 2 billion yuan each day.

But conducing city-wide antibody testing is against the hidden agenda behind the mass nuclei acid testing campaign. As a leading Chinese infectious disease expert pointed out, the Wuhan testing is more an issue of instilling social confidence than of protecting public health. Despite the government's call for speeding economic recovery, progress has been slow in Wuhan. Many Wuhan residents reportedly dared not be reunited with their families or go to restaurants with friends until after they had passed the nucleic acid test. Lack of foot traffic might be costing the Wuhan economy more than 2 billion yuan each day. Moreover, discrimination against people from Wuhan undermined people’s trust in the effectiveness of disease control and their confidence in the restoration of national social order. According to a government newspaper, the mass testing campaign is "actually a litmus test of the overall effectiveness of national disease control and will provide more authoritative basis for ensuing production resumption.” More such campaigns are therefore expected to be kicked off in other parts of China.

Antibody testing, by contrast, may not serve this purpose well. In April, about 11,000 Wuhan residents received antibody tests, and 5 to 6 percent of them were found positive.

The COVID-19 seroprevalence rate, similar to what was found in Spain, suggests that more than half a million people in the city have been infected since the onset of the illness in December 2019, which is 10 times of the officially confirmed cases. The large number of positive infections will not only raise concerns on potential government underreporting but also lead people to question the effectiveness of government containment measures. That might explain why the government has not yet published the testing results and only the Beijing media company Caixin briefly mentioned them in a May 12 report.

The Wuhan mass testing campaign therefore provides another example of how ends justify the means. Once again, it is the politics, not pathogens, that dictates public policy agenda in the fight against COVID-19. But it also points to a state, while authoritarian, that has not exhausted its resiliency and potential for innovation in policy implementation.