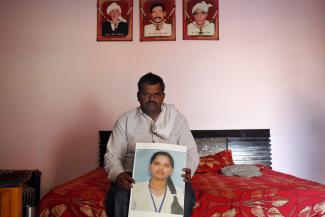 A man poses with a picture of his daughter who died after committing suicide, in Manesar, Haryana, India, on November 28, 2014. REUTERS/Anindito Mukherjee
by Siddhesh Zadey January 5, 2022

Writer and philosopher Albert Camus, in Myth of Sisyphus, wrote, "There is only one serious philosophical problem, and that is suicide." Camus recognized the universality, complexity, and massive toll that suicide takes on society far ahead of the promoters of mental health.

According to the Global Burden of Disease (GBD) estimates, globally, 817,000 people died of suicide (or self-harm) in 2016. The largest democracy with over a billion people, India, is infamously the suicide capital of the world with over 230,000 suicides, or 28 percent of the global total. So, looking at suicide in the context of India is pertinent to all who work on global mental health and injuries.

Indian Women and Vulnerability to Suicide

Of particular concern are young Indian women in the 15- to 34-year-old age group who contribute to 63.4 percent of suicide deaths among women in the country. Suicides are ranked as the number one cause of death among young (15-39 years) Indian women.

India is infamously the suicide capital of the world with over 230,000 suicides, or 28 percent of the global total

The Million Death Study (MDS), a nationally representative mortality survey, also had similar findings. Indian women in the 15- to 29-year-old age group contributed to 56 percent of all suicides among women, with a median age of 25. This study also showed that compared to high-income countries (HICs), suicide death rates for young women were two times or greater in this age group in India.

Researchers have attempted to figure out the possible reasons underlying high suicide death rates among Indian women. Multiple analyses using data from the National Crime Records Bureau (NCRB) point to marital problems, bad marriages, and the end of a marriage. MDS did not find that marriage has a protective effect against suicide—a factor observed in other countries.

However, looking at deaths alone does not yield a complete picture. It is well established that while deaths due to suicide might be lower in women than men, suicidality is higher. According to the National Mental Health Survey of India (2015-16), the prevalence of suicidality—nonfatal suicidal thoughts and behaviors—among Indian women is about 1.5 times greater than it is among Indian men. This survey also noted that suicidality was consistently higher among women than men across age groups, socioeconomic strata, and regions of residence. When looking at the sociodemographic factors that are related to suicidality, being married or divorced/separated puts women at greater risk for suicidality than being single (for example, never married). This is particularly important given that the colloquial conception, borrowed heavily from the HIC literature, relies on the notion of isolation as a risk factor for suicide and suicidality. Indian women who are ever married—married at one time but who may or may not be currently married—seem to face the dangers of suicide more than one would expect.

There is a particular subgroup among women who are ever married, that's also striking: housewives or homemakers who spend several thousand hours doing unpaid work such as cooking, cleaning, caring for the elderly and children, and managing resources and finances day-to-day in the household. Over the past twenty years, consistently, a fifth of women dying due to suicide in India have been housewives. Previously, a study that statistically ranked gender-specific factors for suicide found that among women in the age groups 15-29, 45-59, and under 60 who died due to suicide, the main professional category was housewife. The major reasons cited were dowry disputes and cancellation/non-settlement of marriage among 18- to 30-year-old women, and cancellation/non-settlement of marriage and family problems among 30- to 45-year-old women.

Even with underreporting, NCRB data underscores the suicide problem among Indian housewives. In 2019 (pre-COVID), of the total 139,123 recorded suicides, 41,493 (29.82 percent) were women and 21,359 who died due to suicide were housewives. Housewives made up 51.48 percent of the women, and 15.35 percent of total suicides. When we analyze NCRB suicide deaths among women by professional categories, housewives formed the largest segment relative to other professional categories.

Regional Distribution of Deaths Due to Suicide Among Indian Housewives

While the previous studies and the above analyses depict high suicide death rates and risk among housewives, they also help tell us the probability of dying from suicide if a person is a housewife. Drawing from their findings, we used the Bayes Theorem, which is quite popular among a wide range of analysts—from epidemiologists to machine learning scientists—and is part of every biostatistics curriculum, to calculate this. We found that the probability of death due to suicide jumps from 0.013 percent to 2.74 percent (greater than 200 hundred-fold) for an Indian woman solely by virtue of being a housewife.

A multiplex of biological, psychological, and social factors could be responsible for the high risk of suicide among housewives. Physical and sexual abuse, hormonal changes during the menstrual cycle and pregnancy, and the presence of psychiatric disorders are some of the known contributors to suicide in women. These contributors could exacerbate suicide risk among housewives who have severely limited financial freedom, limited social agency, and lack of recognition for their work, and among those whose health problems may not be attended to well. They are important, yet well-being and quality of life among Indian housewives have been understudied. A small sample of studies suggest that housewives have poorer quality of life compared to working, married women who report higher self-esteem, and less hopelessness and insecurity than housewives, but more research is needed in this area.

After adopting a holistic approach toward mental health in its National Mental Health Policy (2014) and decriminalizing suicide in its recent Mental Healthcare Act (2017), the next pertinent step for India is to invest in solving the suicide epidemic in an evidence-informed and needs-based fashion. Suicide needs to be treated as a biopsychosocial problem impacting individuals, groups, and communities. The World Health Organization's Framework for public health action toward suicide prevention is a key resource that can help policymakers design a national suicide prevention strategy that includes housewives as a vulnerable group requiring attention. The high-level policies can be supported by the grassroots efforts of nonprofits such as the Suicide Prevention India Foundation (SPIF). Upcoming community-level interventions led by community health workers can potentially benefit women and particularly housewives. Comprehensive surveillance systems are of utmost importance to fill in data gaps and improve the collective understanding of the issue. Suicide prevention helplines such as AASRA and iCall, and suicide first-aid guidelines can be directly useful for helping housewives.

AUTHOR'S NOTE: ​​I would like to clarify that we intend to be accurate and sensitive toward the issue of gender identity. As a researcher, I further appreciate the complexity of the associations among biological sexes and gender identities and roles that give rise to the rich diversity of human self-identity and self-expression. The available data and literature compel me to use the terms "women" or "females" interchangeably. However, I realize that mental health issues across the gender-sex spectrum vary greatly and need further research and policy attention, particularly for marginalized groups. Hopefully, future research will allow more complete and sophisticated analyses.

Siddhesh Zadey is a global health researcher focusing on noncommunicable diseases, surgical care, health systems, and policy. He is currently a researcher in the Department of Surgery at Duke University School of Medicine in Durham, North Carolina. He also leads the Association for Socially Applicable Research (ASAR), a non-governmental, not-for-profit think tank and student-led advocacy group in India.

Addressing women's health in Ukraine and other conflict zones