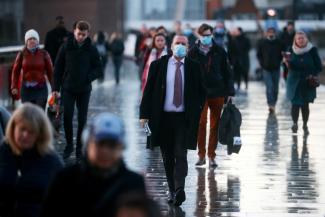 People walk across London Bridge as the spread of the coronavirus disease continues in London, England on December 15, 2020. REUTERS/Hannah McKay
by Jennifer B. Nuzzo and Gigi Kwik Gronvall January 7, 2021

In recent weeks, the spread of two genetic variants of the SARS-CoV-2 virus have raised concerns about national efforts to contain COVID-19. In England and Scotland, where one was discovered just a month after widespread societal restrictions were lifted, the countries ordered strict new lockdowns. Several other genetic variants of the virus have been detected since January 2020, but the UK and South African variants warrant special concern because an increasing body of evidence suggests they spread more easily between people. And their emergence raises questions about the longevity of vaccines, therapeutics, and diagnostic tests developed to combat the virus.

Discovery of the New Variants of Concern

The UK variant was first isolated from patients in September but gained attention in December when researchers noted it was increasingly frequent among sequenced specimens from Southern England. Lockdowns in November had not produced the same decline in cases in this areas as they had in other parts of England where the variant was less frequently found. Separately, in December authorities announced that a different, new genetic variant of the SARS-CoV-2 virus, known as 501.V2, had become the dominant virus circulating in multiple provinces.

UK authorities announced that a new genetic variant of SARS-CoV-2, known as 501.V2, had become the dominant virus

So far, epidemiological and clinical analyses of the UK and South African variants have not found evidence that either causes more severe infections, but there is increasing evidence that they spread more quickly. The speed with which these variants are replacing previously circulating viruses demonstrates their potential to increase caseloads globally. And if more people become infected, more will be hospitalized and die. If the number of people requiring medical attention exceeds available health-care resources, we may also expect the case fatality rates to increase.

Most scientists believe that the SARS-CoV-2 vaccines and antibody therapies currently being deployed will still protect against the new variants, but some are concerned that they might be less effective, particularly if these variants mutate further. Studies are ongoing. But the mere emergence of these variants, with more likely to follow, raises the question of whether new vaccines will eventually be needed.

The United Kingdom and South Africa may have discovered these variants first because of their advanced genetic sequencing efforts, in contrast to many other countries where genetic sequencing of clinical samples occurs less frequently. The WHO is urging countries to increase surveillance for these new variants and other future genetic mutations, noting that only two percent of all the genetic sequences completed to date have been contributed by countries in Africa, most of which were performed by South Africa.

By the end of December, the United States had sequenced only 51,000 of its more than 17 million COVID-19 cases

The U.S. Centers for Disease Control and Prevention (CDC) is increasing surveillance, requiring states to send more clinical samples to the CDC for sequencing and genomic characterization. But by the end of December, the United States had sequenced only 51,000 of its more than 17 million COVID-19 cases. Scientists are also developing tests to look in wastewater for these and new variants, which may enable broader screening.

Many countries have responded to the discovery of these new variants by restricting travel and trade from the United Kingdom. Some of these actions are reported to have interfered with the transport of goods in Europe. A major grocery chain in the United Kingdom warned of potential shortages of food, if restrictions weren’t lifted. France, which initially tried to prohibit all travel from the United Kingdom, has eased some of its restrictions after its measures stranded truck drivers and prevented the movement of freight. The United Kingdom, in return, agreed to conduct mass testing of freight truck drivers. But some analysts predict supply chain disruptions could continue in Europe for several weeks. The European Commission has warned against non-essential travel, but is calling on member states to open trade and passenger transport with the United Kingdom to ensure that essential travel and movement of goods can proceed.

The discovery of these new variants increases the urgency of measures that will  slow the growth in COVID-19 cases. Fortunately, the tools needed to stop the spread of these new variants are the same as those that have been effective since the start of the pandemic: Masks, social distancing, and improving indoor air quality. Countries need to expand diagnostic capacity to identify and rapidly isolate infections and take action to prevent exposure.

Viruses mutate all the time, and SARS-CoV-2 is no different

Vaccination programs should proceed with as much urgency as possible. While the new variants don’t yet alter public health strategies, they do illustrate how the longer the SARS-CoV-2 virus is allowed to circulate widely, the greater the potential for mutations to occur. Viruses mutate all the time, and SARS-CoV-2 is no different. While no mutations found to-date have demonstrated the potential for increased lethality or rendered the virus immune to existing medical countermeasures, there remains the possibility that a mutation with those traits could arise.

Jennifer Nuzzo is a senior fellow for global health at the Council on Foreign Relations (CFR).