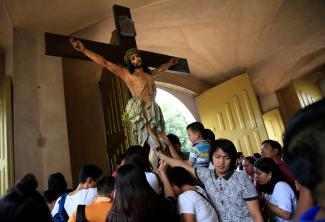 Filipino Catholics touch a crucifix after attending a mass at the National Shrine of Our Mother of Perpetual Help, in Baclaran, Philippines, on September 18, 2016. REUTERS/Romeo Ranoco
by Lourdes Ladrido-Ignacio December 20, 2022

A long tradition connects religion, medicine, and health care. Religious groups built the first hospitals in the fourth century, for those who could not afford private medical care. During this time, religious institutions also took charge of the education of physicians and their licensure to practice medicine. This prevailed until the seventeenth century, when technological advances led to a change. Scientific evidence became the more common basis for medical care. The focus of medical care shifted from a caring, service-oriented model to a technological, cure-oriented model.

Technology has powerfully influenced medicine because its advances provide medicine with the ability to prolong life. But it's also separated medicine and health care from their religious beginnings.

Recent decades have seen these walls of separation weaken. Clinical research looking at extreme life experiences has provided evidence that health care is about more than physical, mental, and social well-being—and includes spiritual well-being, as well. Religion can no longer be ignored in the provision of health care. "Real medicine" can only exist when it embraces the human being in body, mind, and spirit.

Since the 1990's, the member countries of the World Health Organization (WHO) that compose the World Health Assembly have suggested incorporating spirituality into its biopsychosocial definition of health, but the WHO has, so far, not revised this definition. The World Psychiatric Association (WPA) has, however. In 2016, it released a position statement for psychiatrists to include spirituality in assessing an individual's mental health. Yet, the recognition of spirituality as a major component of an individual's health remains unresolved and is still controversial.

The body and mind, and their interconnectedness to an individual's external environment, and the society around them, are vital to human beings

The pandemic, global wars, disastrous ecological changes, and the continuing prevalence of serious illnesses have brought spirituality into undeniable focus and social suffering in the human community cannot be ignored any longer, especially in countries with conditions of social disadvantage and deprivation, like the Philippines. The recognition of the connectedness of religion, spirituality, and health is presently being pursued in the Philippines. In 2018, it passed its Mental Health Law. Among the important provisions is the creation of a Philippine Council for Mental Health (PCMH) as its policymaking body. PCMH recently approved a reorientation and a reframing of the Concept of Mental Health in the Philippines. A broadened multidimensional concept with a biopsychosocial spiritual framework has been articulated and is now being pursued in educational and capacity building programs not only in the health sector but in all sectors of government, especially those departments mandated by the Mental Health Law as members of the PCMH. These sectors are education, labor and employment, local government, social welfare, human rights, and higher education. This multisectoral involvement in the pursuit of the law's vision of mental health for Filipinos affirms an all-of-society approach to mental health now, as everybody's business. The body and mind, and their interconnectedness to the individual's external environment, and the society around them, are just as vital to human beings as their experiences of an internal environment, the "spirit within," which provides meaning, well-being, and peace.

The Philippines is often described as having gone through "300 years in the convent and 50 years in Hollywood," a reference to its colonial history of 400 years under Spain, foremost of which is Spain's legacy of Catholicism, and fifty years under the United States, much of which is in its influence on the introduction of technological advances and support for higher education. Early chronicles, however, attest to rich cultural and indigenous religious practices that continue to exert a significant influence in people's lives and beliefs.

With a predominantly Christian population and a significant concern for its people presently in the South, who practice Islam, the Philippines could provide an important context for understanding the relationship of religion, spirituality, and health—with a special focus on mental health. This has led the Philippine Council for Health Research and Development, under the Department of Science and Technology, to support the program of its Mental Health Research Advisory Group (MHRAG) to address the vital issues related to spirituality in mental health practice and research. The group is composed of experts from different mental health fields, namely psychiatry, psychology, anthropology, and public health. Throughout 2022, multiple roundtable discussions were conducted virtually among leaders of faith-based organizations, and mental health care providers and researchers. The aim was to provide a workable definition of religiosity and spirituality, to identify the role, application, and effect of religion and spirituality in mental health intervention and practice, and to generate the necessary studies that would be included in the National Mental Health Research Agenda. The results from these studies are expected to have a significant impact on the implementation of the Mental Health Law.

A December 2022 hybrid event at the Philippine International Convention Center brought together religious and health leaders to discuss spirituality in health and mental health care. The speakers actively engaged the virtual and live audiences. There were three roundtable discussions. The first included five Catholics, an archbishop, two nun-educators, a Jesuit, a secular priest, and a pastor. The second roundtable included three psychiatrists, two psychologists, a sociologist, a nurse, and seven public health practitioners. The third roundtable was made up of a total of nineteen mental health researchers, including three psychiatrists, four psychologists, nurses, public health specialists, an NGO researcher, and heads of research committees. All agreed that the discourse on spirituality and mental health was a topic they have long wanted to discuss more openly, and that spirituality is the missing link in health care, including mental health care.

What became clear right away, was that religion/religiosity is distinct from spirituality. Religion is a set of philosophies, beliefs that those who are members of a religious organization or institution adhere to and follow. Religiosity is adherence to this prescribed way of worshipping, as well as adherence to a particular norm, liturgy, or sector. Spirituality, however, is an experience, an awakening to the inner reality of our being, to a spirit, a soul. It is other than the body, mind, and life. Spirituality allows one to experience compassion, a personal trait that is vital in the healing process.

Lourdes Carandang, a practicing clinical psychologist who spoke on the topic, "Do Religiosity, Spirituality, and Mental Health Intervention Go Together," offered the following basic principles for mental health intervention, which she practices: "We may use all the carefully  studied evidence based strategies and techniques, but it is really the love and compassion that works. Therapy brings hope, transcendence, and transformation. Spirituality, as experienced this way, is at the core of psychotherapy."

The adoption of a broader perspective of mental health, allowing for it to proceed with a clear biopsychosocial spiritual framework, would give health providers a holistic perspective and a better understanding of the health and mental health needs of the community.

The Seismic Shift in Mental Health Care Since COVID-19

Isolation, job loss, and gender based violence contributed to the uptick in people living with anxiety and depression