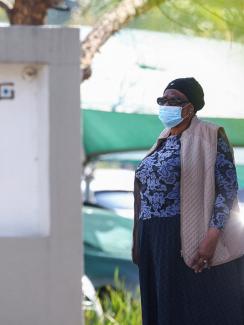 A woman stands at the entrance of Mediclinic in Sandton, South Africa, on August 4, 2022. REUTERS/Siphiwe Sibeko
by Ray Mwareya September 27, 2022

At 8:00 a.m., on August 23, 2021, Babita Deokaran was assassinated outside her home in Johannesburg, South Africa. She was a courageous civil servant working as a senior financial officer at the Gauteng Department of Health. She had spotted large-scale health-care fraud and didn't want to keep quiet.

Deokaran had raised alarms about suspicious money trails. The health ministry had wired $50 million to pay for treatments at a small township hospital. While examining these payments, she discovered patterns consistent with money laundering, including well-known fraud tactics such as invoice splitting—when inflated contracts are given to non-health-care-designated suppliers, often owned by ruling party politicians. In one transaction, $30,000 was used to buy skinny jeans for the hospital. Further investigation revealed that the hospital's CEO was behind the money laundering scheme. He used his position to funnel contracts to entities owned by officials of South Africa's ruling party

Acting on her conscience, Deokaran alerted the health ministry to begin auditing the invoices before paying them. Her supervisors reportedly ignored her request, and payments continued to flow to suspicious companies. She later confided to her colleagues that she feared for her life trying to combat fraudsters fleecing the public health-care ministry. Reports show that the health ministry and her superiors did nothing to guarantee her safety.

Whistleblowers exposing all types of fraud in South Africa's government, including public health-care services, are under threat.

"There's no political will at the highest level to protect whistleblowers in South Africa," says Martha Ngoye, who rose to fame after exposing a train-leasing scandal. Ngoye was later alerted at Babita Dekoran's funeral that hitmen were following her.

"To be followed at a memorial service of a [health-care] whistleblower who was killed for doing the right thing is mind-boggling," she told Think Global Health. Ngoye and Deokaran are not alone in their vulnerability. Former University of Cape Town (UCT) ethics lecturer Athol Williams—South Africa's most famous whistleblower, who leaked information on how Bain & Company colluded with South Africa's top ruling party chiefs to weaken and fleece the South Africa Revenue Service—went into exile after he determined South Africa's government would not ensure his safety. Williams, in a public statement on November 7, 2021, explained that after "receiving warnings from trusted allies and a civil society organization about a coordinated effort against [him], [he] took the sad step to leave home, again without any help."

Graft and impunity run deep in South Africa's public health-care sector. Even at the height of the pandemic, shady syndicates and high office bearers of the governing African National Congress party of money from hospital contracts. The South African health minister, Zweli Mkhize, resigned in September 2021, after reports appeared to show that he and his family diverted millions of rand set aside for combating COVID-19. Mkhize denies the fraud. South Africa also recently concluded its famous "State Capture" inquiry, a judicial probe into grand fraud whereby former President Jacob Zuma, helped ease the doors for the looting of $38.5 billion between 2014 and 2019. Zuma maintains his innocence.

Despite volumes of evidence presented by whistleblowers, prosecutions are half-hearted. Convictions are rare.

The precarious nature of health-care whistleblowers' safety in South Africa is due to the complex nature of threats.

"The threats can come from multiple places because what we have seen in the public health ministry is collusion between politicians, officials, and private criminals posing as businesspeople," said Karam Singh, executive director of Corruption Watch South Africa.

Singh criticizes South Africa's whistle-blowing laws as woefully inadequate. "What we have is a system of protected disclosures. There's protection around what you say not being used against you. But we don't have a system that (physically) protects the whistleblower themselves," he says.

Ngoye says corrupt senior state officials have multiple ways to punish whistleblowers in South Africa. "Since 2015, as soon as I have identified something fishy, I have been suspended, disciplined at work. I'm used to this," she explains, opening up on the financial ordeals of losing her job due to whistleblowing, being taken to court by the state, and paying out of pocket to defend herself.

"It's a clever tactic; bankrupting a whistleblower," Ngoye adds.

Between 2012 and 2019, 670 whistleblower reports on corruption in health care were filed in South Africa

South Africa spends about 8.6 percent of its GDP on health care. This is a larger proportion compared to other countries in Sub-Saharan Africa. In the period from 2012 to 2019, there were 670 whistleblower reports filed related to corruption in healthcare in South Africa.

South Africa's poorest communities stand to lose the most from government corruption and violence against whistleblowers. Currently, 86 percent of South African people making less than $69 rely on public health care.

"It's our laws that compel us to show that each year the government is doing more in the provision of health care and sanitation. It's the common people who bear the brunt of corruption. It's devastating," says Wayne Duvenage, chief executive of Organization Undoing Tax Abuse, speaking to Think Global Health from Johannesburg.

First and quickly, South Africa should create a specialized police unit and laws that protect whistleblowers exposing organized fraud in its public health care. "That should be facilitated via new legislation. [South Africa] needs to see a dedicated place within government where whistleblowers can feel safe that they can go to where their needs can be assessed, and appropriate protection is given," says Karam Singh, the Corruption Watch leader.

Secondly, South Africa should take a cue from the U.S. Securities and Exchange Commission a mechanism where 10 to 30 percent is the reward given to individuals who bring forward high-quality information that leads to a penalty of over $100,000 levied on the criminally convicted.

"We should probably do that," says Singh.

But most important is the need to ensure high profile criminals convicted for fleecing public health care or any other public funds are sitting in jail. In June, the Gupta brothers, who were accused of orchestrating South Africa's notorious "state capture" spree, were arrested in Dubai on an extradition warrant to South Africa.

"This is good news for South Africa," says Wayne Duvenage. "It's a start."

Ray Mwareya is a tech journalist who has written for Al Jazeera, Codastory, Reuters, China Radio International, Newsweek, and is the third prize recipient of the 2016 UN Correspondents Association Media Prize. He is based in Johannesburg, South Africa.