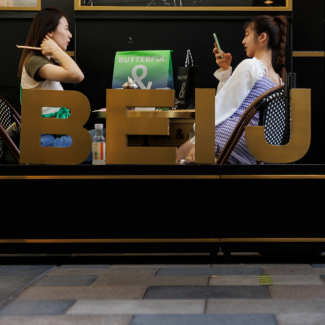 On July 7, Li Ang, the deputy head of Beijing Municipal Health Commission (BMHC) announced that beginning on July 11, those who had not received COVID-19 vaccines would be denied access to public venues including libraries, museums, and cinemas. The mandate also stated that those elderly who live in military and civilian retirement and nursing homes, as well as their visitors, be fully vaccinated.

The vaccine mandate immediately triggered social media backlash on WeChat and Weibo, contending the mandate violated the principles of "informed consent and voluntariness" laid out by the central government on vaccination. One post, which was read by nearly 200,000 people, asked the Beijing municipal government to rescind the mandate immediately. The next day, a reporter from the Beijing Daily interviewed a person in charge of fangkongban—Beijing's municipal office for COVID prevention and control—who stated that residents who hold proof of negative PCR test results within 72 hours and have been screened for temperature could access all kinds of public venues.

Beijing reversed its vaccine mandate on July 8. On the surface, the quick annulment of the vaccine mandate shows how responsive the government was to public feedback and complaints. One article hailed the policy U-turn as "the victory of the people." But that explanation is simplistic for at least four reasons. For starters, it does not convincingly explain why the government was not responding to other, equally unpopular anti-COVID measures, such as forced quarantines and lockdowns. Also, despite vaccine skepticism, there is no indication that opposition to the vaccine mandate represents the mainstream public opinion in Beijing. Indeed, the percentage of the unvaccinated population in Beijing remains very small—the government claimed that 98 percent of the city's residents have received two doses of vaccines, and as of April, 80 percent of those over the age of 60 had been vaccinated. Even though opposition movements have historically prompted local governments to suspend unpopular projects or programs, it is often the result of mass incidents or violent protests, which were absent in this case. Compared to such "focusing events," it normally takes time for social media backlash to be recognized by the government and channeled into the policy process for government action.

Another explanation zeroes in on the legality of the mandate. While the Vaccine Administration Law (2019) and Basic Healthcare and Health Promotion Law (2019) both make it a civic duty to be vaccinated, they only apply to vaccines covered by the planned immunization program such as oral poliovirus vaccine—a Category 1 vaccine, meaning it is required by the Chinese government. COVID vaccines are not officially included in the program and thus only classified as Category 2 vaccines, which are not required for residents in China. This theory nevertheless begets more questions than answers. If they are not required to take COVID vaccines, why are they obliged to conform with other government sponsored programs whose legality is equally called into question.

In a widely circulated letter, Tong Zhiwei, a professor of constitutional law at the East China University of Political Science and Law in Shanghai, China, said measures such as forcing neighbors of COVID-positive cases into quarantine centers are illegal and should be stopped immediately (which did not happen). Also, the explanation implied that Beijing's municipal government, in unveiling the vaccine mandate, was not aware that the mandate was not legally justifiable. The National Health Commission (NHC), which officially has professional leadership over BMHC, was consistent and clear in opposing any local government efforts to make the vaccination mandatory. In September 2021, for example, it explained that any measures that seek to restrict people's access to public venues violated the aforementioned principles of vaccination.

Under whose influence was the vaccine mandate scrapped, and in such abrupt reversal?

That leaves us with the final question: under whose influence was the vaccine mandate scrapped, and in such abrupt reversal? Officially, a different government agency (fangkongban) overturned the decision of BMHC. But there is no evidence supporting fangkongban and BMHC are two separate agencies. When searching "fangkongban," almost all the related news is about its decision to rescind the mandate. There is little officially published information about the mission and staffing of the organization. One web page titled "Beijing COVID Prevention and Control Headquarters' phone number for tipping and inquiry" mentions fangkongban, but seems to equate it to the Headquarters, about which little information is provided, either. The same page, though, lists BMHC as the government agency to accept and hear the tipping and inquiries, suggesting that fangkongban is housed by BMHC. In other words, the vaccine mandate was rescinded by the same government agency. Could the order then have come from the National Health Commission? In the absence of a vertical authority relationship between NHC and fangkongban, the latter does not take orders from NHC but from Beijing's municipal government. NHC cannot issue orders to the municipal government, either though, because the two have the same bureaucratic rank. As predicted by the "fragmented authoritarianism" policy model, breaking a deadlock between different government agencies over a particular policy issue typically requires intense inter-bureaucratic bargaining, even intervention from the top level.

Since bargaining takes time, it is more likely that the policy U-turn was the result of direct intervention from a central leader. Under this scenario, the vaccine mandate drew the wrath of retired (but still influential) government officials in Beijing and/or their children who are themselves vaccine skeptics. Some of them managed to use their political clout to bring the case to a central leader for arbitration and intervention. Since Premier Li Keqiang was supportive of vaccinating older people, they might turn to President Xi for help. Xi would be sympathetic to their plight for at least three reasons, including the fact that he needs the support of the party elders in seeking a third term as the party-state's paramount leader prior to the twentieth Party Congress. Also, his vaccination status remains unknown, and rumor has it that he was not vaccinated until May and even then, he chose to take BioNTech's mRNA vaccine (which has not been officially approved for use in China). Perhaps more important, Xi is a fervent supporter of a Zero COVID policy, which tends to marginalize the role of vaccines in policy implementation. Zero COVID does not tolerate any infections, but that ambitious objective cannot be fulfilled even with a 100 percent vaccination rate in China (not to mention that the Chinese inactivated vaccines have low efficacy rates in preventing infection). That might explain why he opposes the idea of "collective immunity" and stands behind Zero COVID.

Unlike leaders in other countries, Xi has neither been seen getting a COVID-19 vaccine at a public event, nor has he publicly called for prioritizing vaccination of broader population at home. The lesser status accorded to vaccines in achieving Zero COVID is indicated by the remarks of the head of fangkongban, who said that vaccination is "an important measure" to prevent the spread of COVID. But Beijing's Li Ang earlier justified the mandate by saying that vaccination is "one of the most effective measures to prevent and control COVID outbreaks." In short, the policy U-turn may not only highlight the ad hoc and disjointed policy process in China, but also mirrors the inherent tensions between Chinese leaders who support Zero COVID policy and those who support mass vaccination.

How Singapore, Australia, Vietnam, and others are transitioning

The Closed Loop of the Beijing Olympics

A zero-COVID paradise or sci-fi fantasy?