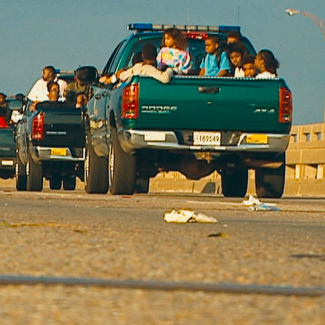 The opening scene of the new HBO film "Katrina Babies" is harrowing. You hear the rhythmic thrum of helicopter blades as news footage shows two young boys in a rescue basket suspended from a bright orange U.S. Coast Guard helicopter. They careen and twirl, swinging precariously high above vast, brown flood waters, submerged houses, and stranded friends and neighbors on rooftops below. This emotional footage sets the tone for the whole film.

"Katrina Babies" is an intimate, honest story that invites the viewer to bear witness to the catastrophe, trauma, racism, loss, grief, family, love, and community experienced by Black children after Hurricane Katrina. Filmmaker Edward Buckles, Jr., was 13-years-old on August 29, 2005, when Hurricane Katrina slammed into the U.S. Gulf Coast, including his hometown of New Orleans, Louisiana, devastating the region. In the film, Buckles weaves his own experiences and childhood memories in and out of interviews with those of family members—his cousins and parents—and other young adults who were children when Katrina struck. It is a film about home and the unjust loss of home, and who you become when you lose the physical, geographical home that made you who you are.

As he invites viewers deeper into his narrative, upbeat music kicks in and a youth gospel choir begins singing, "Nobody knows the troubles I've seen." Happy footage of a family wedding and video of people dancing flickers across the screen. Buckles, who narrates the documentary, says, "Before the storm, there was nothing like being around my family.” Using collage-style animation, he shares warm memories of his cousin Tina's house, where he played with his three young cousins—carefree days running around the block, and coming in as night settled, playing video games, and filling his belly with Tina's rice and gravy.

"Our houses are cozy, our hospitality is very good, the houses smell like good food," he says.

Then the story turns to the immediate aftermath of Katrina in New Orleans. More news footage reveals people trapped in their homes, stranded on rooftops, mothers carrying babies, and elderly people moving through waist-deep water. The increasing desperation of displaced survivors—especially the youngest ones—is palpable, and the disorganization of local and national governments is apparent.

Buckles talks about his own family's journey to a shelter immediately after the storm, then later living temporarily in other locations until finally returning to their home in New Orleans, which was damaged in the flooding. He expresses his ongoing anxiety over the well-being of Tina and his cousins, who stayed in their home during the storm, in the attic, until they were rescued a few days after the hurricane. They were ultimately displaced to another city, and in more recent interviews, Tina and his cousins talk about the storm, the aftermath, their losses, and how it shaped their lives now. There is a sense of grief humming below the surface of their interviews. But as they play with their young kids and take family photos, there is also a feeling of hope for the next generation of their family.

As Buckles shares news footage and his own video clips from the days, weeks, and years following Katrina, he splices in interviews of other child survivors, asking them how they feel. One young woman, now a photographer, recalls being sent to the convention center in New Orleans, seeing a dead man on the street, smelling feces, and feeling like the experience was not real. She begins to cry, trying to hold back her tears, and Buckles asks if she has ever told her Katrina story to anyone. In one of the documentary's most heartbreaking moments, she says that no one ever asked. Buckles becomes emotional and stops filming.

"In America, especially during disaster, Black children are not even a thought," Buckles narrates. "Nobody ever asked the children how they were doing. So I am."

Another young woman interviewed says when she returned to New Orleans after the storm and saw her family’s flood-ravaged house, she realized her life was reduced to a trash bag—that is when the loss and reality sunk in. She asks Buckles: When so much of your identity is about where you're from and your neighborhood, and then you go back and your house isn't there, then what is your identity?

Buckles also films his work in a school where he teaches a media course to teens, many of whom were just toddlers during the historic hurricane. They speak of the trauma imprinted on them from that early life experience and their struggles living in post-Katrina New Orleans, where the old, tight-knit neighborhoods are now broken up and property values are too high for former long-time residents. They talk about gang violence and safety concerns.

"Even though we are resilient, we can never get back what was lost"

Mental health issues, such as depression and anxiety, were common—according to research conducted in the first years following the storm—in children who lived first-hand through Katrina. In 2010, five years after Katrina, research published in the American Medical Association's Journal of Disaster Medicine and Public Health Preparedness indicated that one-third of children affected by the storm were diagnosed with at least one mental health problem. Yet, fewer than 50 percent of parents said they were able to access needed mental health services for their children. The research also showed that after Katrina, children affected by the hurricane were 4.5 times more likely to have serious emotional disturbances than children who were not affected.

While the documentary pulls back the curtain on the trauma many children suffered, and still suffer from as young adults, it is also a love story to Buckles' family and to the idea of "home." Buckles finds catharsis through his filmmaking. "Being able to talk about Katrina is part of my healing process, healing something you didn't even know you had to heal to begin with," he says. And while he says resilience is part of the healing process, he believes New Orleans and his family, his neighbors and the community, will never get back what was lost.