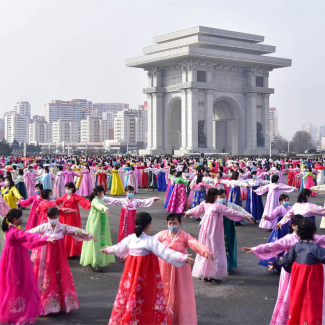 Just over a week ago, North Korea went public with news of its first COVID-19 outbreak, announcing that the BA.2 omicron subvariant had been detected in its capital city Pyongyang. The government declared it was facing its “gravest national emergency” and ordered a nationwide lockdown. As of this week, state media reported more than 1.9 million people had experienced fevers and 63 people had died from COVID infections. But the World Health Organization has yet to document any infections or deaths in North Korea.

Victor Cha, Georgetown University professor and Korea chair at the Center for Strategic and International Studies (CSIS), spoke with us about what may have precipitated this outbreak and the government’s decision to acknowledge it publicly, as well as the potential political implications of this COVID outbreak. Cha is also a featured expert on the CSIS podcast about North Korea, "The Impossible State."

Think Global Health: Why is North Korea at this point in time going public with its COVID-19 outbreak? Experts, including you, have suspected it for some time now.

Victor Cha: I think they've always maintained a zero-COVID policy, and they said they've had no cases. Nobody believed that. Everybody thinks they did have some cases. I think the reason it's coming out now is that the Omicron variant is in the country. I think that's what it is. Even though they have not accepted vaccines, they've been following very carefully what's going on in the world.

They said they've had no cases, nobody believed that

Victor Cha: I think one of the reasons why they said no to the initial COVAX offer of vaccines was that they had done their own research and saw that there were questions about the Chinese Sinovac vaccination and [the Russian] Sputnik vaccine, even the [U.K.'s] AstraZeneca vaccine—there were questions about them. They've locked down their border to try to prevent the virus from getting in, but they now have the Omicron variant, and they know how much more contagious it is. I think they're really freaked out right now because they also know that while it's had some effect on the rest of the world, for most of us—I haven't gotten it yet—they know that their population is very different, right? They're completely unvaccinated, and they have lots of comorbidities, and they don't have a public health system. So, they are very worried about what's going on and that's why they're being much more public about it now.

Think Global Health: Let's go back for a moment to how we think the virus entered North Korea and then spread. I saw you tweeting about three potential channels. You said that the primary source was most likely through China, through either smugglers circumventing lockdown, or cargo quarantine sites, or at attendance at a big military parade in Pyongyang, in April.

Victor Cha: It has to be one of those three. What we saw in the first quarter of 2022 was North Korea moving from a complete lockdown on the border to trying to do a partial opening. We had satellite imagery of an airbase that they converted into basically a storage quarantine facility. Truck containers would go there and quarantine for about six weeks. North Korea was trying to open up a little bit in the first quarter of 2022, too. And so, I imagine that's one way that the virus possibly came in—through smuggling. The government has tried to stop smuggling. This April 25 big celebration could potentially have been a super spreader event. Aside from that, all of the foreign diplomats have left, all the NGOs have left, and there's no foreign representation in the country, so it's not like people are moving back and forth. To me, those are then the only possible ways that it could have been transmitted.

Think Global Health: They've reported [as of May 19] nearly 2 million cases of fever and 63 deaths. Any thoughts on that ratio?

Victor Cha: They don't know because they don't have testing. They don't have PCR or antigen testing, so they have no idea what it all means. If you look at the CSIS report we did, our experts actually didn't project that the number of deaths would be that high. They thought it would be about 150,000 at maximum in a population of about 20 million. That's still significant, but not on the order of the million deaths [in the United States]. Unfortunately, the metric for North Korea is the famine in the mid 1990s, which affected 10 percent of the population, so about 2 million people. It is a similar projection, but of course, that projection could be very wrong.

Think Global Health: What are your thoughts and concerns on the current growing food crisis in North Korea, and how that seems to be coinciding with the announcement of COVID-19 in the country? How do you see the regime handling that, and what are the implications of both of those happening at the same time?

Victor Cha: It really is a perfect storm, right? Because of the virus, they've had a more than a two-year lockdown—since January of 2020. That has wiped out all food, stocks, medicines, everything. They had a very poor harvest last year. And it's in a population that has a lot of comorbidities. So, you put all those things together, and it really is the perfect storm.

It's down to how they deal or don't deal with this, right? Even if countries wanted to send emergency grain shipments into North Korea, they would probably say no because they're so afraid of the virus getting in the country. This is the amazing thing about this lockdown—it completely makes it hard to sanction North Korea and makes it hard to help North Korea. I don't think they have an exit strategy for how to deal with this.

It’s a perfect storm—the virus, the two-year lockdown, wiped out of supplies, a very poor harvest, and a population with lots of comorbidities

Think Global Health: At TGH, we were talking about how, to save face, North Korea may not take direct aid—such as food, vaccines, and test kits—from South Korea or the United States. But if they do take some, it might go through the UN. What do you anticipate is going to unfold in the next couple of weeks?

Victor Cha: We recommended in our report that the world consider a massive vaccine campaign for North Korea—not related to [negotiations] with the nuclear weapons issue—just to avoid some weird new variant coming out of the country.

We will see what President Biden says at the summit with South Korean President Yoon Suk-yeol this weekend, whether they will say something about offering help to North Korea because of the current situation. I think you're right that North Korea would not take any United States assistance—it would need to be directed through COVAX or someplace else. The South Koreans traditionally have given directly to North Korea, largely because then North Korea can circumvent all of the normal sort of protocols of transparency and monitoring requirements that would come through something like COVAX.

The dilemma for the North Korean regime is that this [South Korean administration] is a new, conservative government that has talked about taking a harder line toward North Korea. Although this conservative government has also said very clearly in transition statements that they are open to humanitarian assistance for North Korea short of any denuclearization negotiations. So, they've been clear about that. And Yoon has already said that he's willing to give it. Again, this is sort of this corner that the North is in because the most likely candidate to provide that assistance and that has the capacity for both for the vaccines and for cold storage and for test kits—all that is South Korea. But I'm sure that Kim Jong-un wants to resist taking a handout.

Think Global Health: With denuclearization, in your report you said lockdown would be an impediment to those efforts. But could this circumstance also be an opening to talks?

Victor Cha: Yes, I think so. The view was always that North Korea would never link these two things. Having said that, you wouldn't want to rule out the possibility that if there was substantial support given by the United States and South Korea, and maybe even Japan, to help North Korea in this situation, that that might lower the temperature a little bit and allow for some sort of negotiation to take place showing that these countries do not have a "hostile policy," the term North Korea always likes to use. That said, I don't think that either South Korea or the United States would leverage humanitarian assistance, especially this kind of humanitarian assistance, for them to come to the table on the nuclear negotiations. And if there was anybody that would be helpful in trying to send that message—it would be China. But China is in no mood to cooperate with the United States on North Korea these days.

Think Global Health: Speaking of China, how does China respond to the outbreak in North Korea, given its own COVID crisis? You'd normally expect them to be the country that steps in to give aid privately right now. Does COVID hurt that?

Victor Cha: I think that's right. For one, even if they want to provide aid, I don't think the North Koreans would accept it, because that is probably where their coronavirus came from. The partial opening that North Korea was trying to do was probably inconsistent with China's own zero-COVID policy. So, there's that element of it. But it really is a predicament because in the past, the primary impediment to providing any sort of assistance for humanitarian crises in North Korea was political, in the sense that the regime would have to accept it. There was just terrible negotiation with the EU over monitoring compliance and other COVID protocols. Then the added variable now is that even if there was a political will to provide it, the regime is unlikely to accept anything because of the lockdown, and they have no platform for it either. They have no breathing space because they have no ability to test, no ability to monitor. All they're doing is just sort of trying to quarantine people based on fevers. And some of those could be from flu. There's a type of SARS flu going around now, in which case they're just multiplying the problem because they're probably putting COVID-infected people with SARS-non infected people and quarantining them together.

I don't see an exit strategy. And this to me, I've always believed, and I've written about this in the past, is that a war with the United States or a public health crisis, are probably the most existential threats to North Korea.

That is why they responded the way they did to the Ebola outbreak in West Africa, to MERS in 2015 in South Korea, and to SARS earlier in China. Every single time in North Korea, everything's been complete lockdown. And they were successful in the past. But this time, what we all know about this virus is that it is not easily contained.


Samantha Kiernan is a program coordinator for global health at the Council on Foreign Relations.