Go to homepage
Nicotine Pouch Use Is on the Rise
Governance

Nicotine Pouch Use Is on the Rise 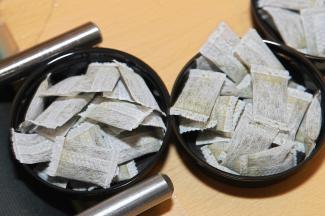 Nicotine pouches are one of the fastest growing nicotine delivery products in the United States. There are a variety of reasons why people are using these small sacks full of nicotine and other ingredients, including as a substitute for cigarette smoking.

Pouches can deliver as much or more nicotine as medicinal nicotine—gum and lozenges used to help people quit smoking—and they have a similar toxicity profile. They are sold under brand names, including ZYN, Verve, on!, Rogue, and NIIN. Placed between the upper lip and gums for up to an hour, they also contain as much nicotine as moist snuff, though they do not promote spitting as many moist snuffs do.

Applications have been made to the U.S. Food and Drug Administration (FDA) for initial approval of nicotine pouches, and some, including Verve—an oral tobacco product that contains nicotine derived from tobacco, but does not contain cut, ground, powdered or leaf tobacco—have received "premarket approval."

"Evidence shows these products could help addicted smokers who use the most harmful combusted products completely switch to a product with potentially fewer harmful chemicals," Mitch Zeller, director of the FDA's Center for Tobacco Products, said in an FDA press statement last fall.

The FDA found that Verve was "appropriate for the protection of the public health" based in part on a review of data showing that "youth, nonsmokers, and former smokers are unlikely to initiate or reinitiate tobacco use with these products." Product performance will be monitored over the next few years for emerging ill effects.

In 2019, for the first time, the FDA review also cleared some U.S. versions of low-nitrosamine Swedish snus—a smokeless moist powder tobacco pronounced "snoose"—to be marketed with the statement, "Using [this product] instead of cigarettes puts you at a lower risk of mouth cancer, heart disease, lung cancer, stroke, emphysema, and chronic bronchitis." (The idea for medicinal nicotine gum first arose from the observation that Swedish submariners substituted snus when unable to smoke cigarettes.)

No nicotine or tobacco use is preferable to any nicotine or tobacco use. But to understand how "unsafe" products can still be "safer" than cigarettes, one needs to understand the risks of smoking. Tobacco cigarettes kill at least one in two smokers on average ten years earlier than never smokers. Calculating from a U.S. Centers for Disease Control and Prevention (CDC) fact sheet, the majority of deaths (55 percent) in smokers are due to lung cancer (29 percent) and other respiratory diseases (26 percent). Another 34.7 percent of deaths in smokers are attributed to cardiovascular diseases. Nine out of ten (89.7 percent) early deaths in smokers can be traced to the toxic, carcinogenic, cloud of smoke inhaled into the lungs. Cigarettes cause another 41,000 deaths in nonsmokers due to secondhand smoke. Babies whose mothers smoke while pregnant and babies who are exposed to secondhand smoke after birth are more likely to die from sudden infant death syndrome (SIDS) than infants who are not exposed to cigarette smoke. And one in every five babies born to mothers who smoke during pregnancy has low birth weight.

A common belief, even in the medical profession, is that nicotine causes cancer. In one 2020 Rutgers-led national survey of 1,0000 physicians, 80 percent  believed nicotine directly causes cancer. But this notion is mistaken—it's the dozens of chemicals in cigarette smoke that are known to be carcinogens.

In 2014, the Surgeon General's Report stated: "Death and disease from tobacco use in the United States is overwhelmingly caused by cigarettes and other burned tobacco products. Rapid elimination of their use will dramatically reduce this public health burden." And the former FDA Commissioner, Scott Gottlieb, clarified in a 2017 speech that it is not the nicotine itself causing disease, noting that "the nicotine in cigarettes is not directly responsible for the cancer, lung disease, and heart disease that kill hundreds of thousands of Americans each year."

Circling back to nicotine pouches—they do not contain the toxic products from tobacco leaf or its combustion, and they do not involve inhalation into the lungs. While not "safe," nicotine pouches are one of the least harmful ways to ingest nicotine. If cigarette smokers use the nicotine in pouches as a complete substitute for the nicotine in cigarettes to stop smoking, this would greatly reduce the risks to their health from smoking. Occasional substitution of pouches for cigarettes, however, would have no health advantage.

As of 2019, it became illegal in the United States for retailers to sell any tobacco product to anyone under 21

Use of Pouches by Youth Should Be Prohibited

As with other unsafe, addictive, psychoactive drugs legally used by adults—including alcohol and cannabis—it is in the interest of public health to prevent use of nicotine, including nicotine pouches, by youth. As of 2019, it became illegal in the United States for a retailer to sell any tobacco product—including cigarettes, cigars, and e-cigarettes—to anyone under 21, and such bans should be enforced.

The CDC promotes concern—arising from animal research—over possible adverse effects of nicotine on the development of the human brain. There is evidence that other influences, such as alcohol, caffeine, other psychoactive drugs, hormones, diet, sleep, and stress also affect brain development. And nicotine use should be avoided during pregnancy. There are concerns about possible effects on oral health, as well.

Nicotine Products: A Gateway to Cigarettes?

While there is some evidence generally showing small effects that using another nicotine product first can lead to cigarette smoking, prior use of another nicotine product does not appear to be a major driver of becoming a regular smoker. Prior use of non-combusted products may even help deter progression to cigarettes, according to some research. For example, when nicotine vaping was increasing among youth, cigarette smoking was decreasing.

Other individual characteristics that are related to engaging in multiple risky activities, including drinking alcohol, seem to be stronger predictors of adolescents who take up cigarettes.

Addiction to any drug means that the use of the drug can be difficult to stop, even in those who are trying to stop. The pouches may be somewhat less addictive than cigarettes. But some level of addictiveness is probably essential to pouches being able to substitute for cigarettes. Views differ on the public health significance of nicotine addiction in former smokers, once the main tobacco smoke toxicity has been removed.

Government authorities have widely promoted that "there is no safe tobacco product." One warning on smokeless tobacco is: "This product is not a safe alternative to cigarettes." This is not adequate information for smokers and has contributed to the belief that all tobacco and nicotine products are equally harmful. Many decades ago, the public understood correctly that smokeless tobacco was less harmful than cigarettes. Yet, a recent National Cancer Institute survey found that only 9 percent of adults answered "yes" when asked if "some" smokeless tobacco products were "less harmful" to health than cigarettes.

Understanding that no tobacco or nicotine product is safe is appropriate. Consumers also need to understand that inhaled smoke from cigarettes is much more dangerous than non-combusted products, including nicotine pouches.

Lynn T. Kozlowski, PhD, is a professor of community health and health behavior and former dean for the School of Public Health and Health Professions, University at Buffalo.

For the tobacco industry, the pandemic has been a golden opportunity to build influence globally