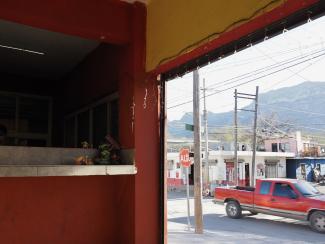 A snapshot of town from the inside of a taco shop, in Hidalgo, Nuevo León, Mexico, on January 2, 2023. Photo courtesy of Chen Chen
by Chen Chen January 13, 2023

In 2020, Mexico enacted a law requiring warning labels on the front of food packages that contain "excess" sugar, calories, sodium, or saturated fat by Official Mexican Standards. This was an update to Mexico's 2014 front-of-pack nutrition labels (FOPNL), and part of a wave of Latin American countries—starting with Chile in 2012—that are implementing laws to curb obesity.

Public health policy expert Eric Crosbie, associate professor at the School of Public Health for the University of Nevada Reno, described this "policy diffusion" of warning labels throughout the Americas as a "boulder going down the hill."

"The [junk food] industry was really terrified of that diffusion," Crosbie said. "They put a lot of their energy and efforts into stopping Mexico because Mexico is seen as kind of the fulcrum of Latin America, with influence throughout the region."

How Hidalgo Physicians Are Talking to Patients About Nutrition Labels

Hidalgo—an hour drive north of the industrial hub of Monterrey and two hours from the U.S. border—is a hospitable town of 16,000 residents in the Mexican state of Nuevo León. Local residents claim that Nuevo León has the highest per capita consumption of Coca Cola in the world.

"About 20 percent of my patients ask about the new labels. Here in northern Mexico, there are high levels of diabetes and hypertension, even more so than in the south," said Jonathan Levi Rito Medina, a general physician for a private practice in Hidalgo.

Rito thinks that part of the reason for this discrepancy is that northern Mexico is more consumerist and has greater access to American food. People here drink Coca Cola for breakfast, lunch, and dinner, he said. For his patients with diabetes or hypertension, he emphasizes the risk of consuming foods with the black labels exacerbating their conditions and tells them to avoid such products completely.

"Eighty percent of my patients have health problems related to junk food," Rito said. "Our region is very different from central and southern Mexico where they eat more vegetables and fruit.”

Rodolfo Guadiana, a rheumatologist who grew up in Hidalgo and commutes to Monterrey Monday through Friday to work at El Instituto Mexicano del Seguro Social—a public, teaching hospital—spends Saturdays doing consultations in Hidalgo at a small private clinic.

"In Mexico, there are high rates of arthritis problems," Guadiana said. "Eighty percent of my patients have [arthritic] conditions related to obesity."

The majority of his patients make the connection between their nutrition and their arthritis—that weight gain worsens arthritis. But Guadiana explains that some of their conditions—including high blood pressure, high blood sugar, and abnormal cholesterol—are linked to metabolic disorders.

Another general and family physician in Hidalgo, Cristian Jonatan Guajardo Gonzalez, shared the sensitivities of talking to patients about obesity-related topics.

"Here in Mexico, and in Hidalgo, if you talk to people about being overweight, they can get offended," said Guajardo, who touches on the subject with his regular patients, discussing prevention.

For patients who are already suffering from conditions like diabetes and hypertension, Guajardo will talk to them directly about obesity and nutrition. These conversations are particularly important for younger patients—70 percent of the kids he sees have insulin resistance.

"There's also a big problem of patients looking for homemade remedies or magical pills [for weight loss]," Guajardo said. "There are a lot of nutritionists but no demand. Out of one hundred patients who I recommend see a nutritionist, only 15 to 20 percent go to nutritionists after recommendation. Only 10 percent stick with it."

A town known by outsiders as the gateway to El Potrero Chico—a rock climbing mecca—and unheard of to most others, Hidalgo has no shortage of fresh, delicious fruits and vegetables year-round.

Every Tuesday and Friday, a farmer's market makes everything from huitlacoche (corn smut) and cactus to guava and plums cheap and available. There is even a shop that will chop your vegetables for you on the spot, so you can take produce home to cook right away.

One percent of Hidalgo's population is in extreme poverty and 22 percent fall into moderate poverty.

"My guess is the corporations have penetrated so far that the addiction has set in," Crosbie said. "I've traveled a lot throughout Latin America, and I've been to some very rural areas processed food is so available and cheap."

Beyond the access to junk foods, Crosbie said that the billions of dollars corporations spend on marketing have shaped the culture around food, making junk food more appealing than fresh food.

Rito thinks that obesity and junk food tend to be a general problem across income levels. Prior studies have tied junk food and sugar-sweetened beverage consumption to urbanization and economic growth in low- and middle-income countries like Mexico.

"The younger generation are more affected, and chronic diseases are showing [in young people]," he said.

When asked how often he talks to his family in Hidalgo about eating healthily and combating obesity, Guajardo said, "All the time."

How Food Labels Are Making a Difference

Mayelela Lopez, owner of a local grocery store called La Mano De Dios, said that the biggest change she has noticed since the food label updates in 2020 was that demand for diet Coke has shot up.

There is ample evidence of a decline in the purchase of unhealthy products following the implementation of the black octagon warning labels, Crosbie said, citing Chile as an example.

"You see a little bit of reformulation from the industry itself, trying to change the nutrients so that they're not as high in calories or sugar," Crosbie said about processed food manufacturers.

Mexico banned cartoon mascots on food products in 2018 and cracked down to enforce the ban beginning in late 2021 and early 2022. Food products that don't have warning labels seem to be allowed to have cartoons to doubly bolster healthy choices.

"I haven't noticed any changes on potato chips and cookies," Lopez said. "But I think prohibiting cartoons [on packages] played a big role for kids. The drawings attracted them."

From her observations at work, Lopez estimated that out of one hundred mothers she sees, two will tell their kids that they can't buy a product because of the warning labels. She notices that people tend to encourage young kids to not eat junk food with the new labels.

"[The 2020 label policy] doesn't make a difference for me, but I like seeing the labels and knowing what I'm buying," Lopez added.

In addition to the "excess" labels, the 2020 update also included warnings that caution against allowing children to consume products with caffeine and artificial sweeteners.

Over 35 percent of children and adolescents in Mexico are overweight.

Next Steps for Mexico

According to a 2021 UNICEF report, over 35 percent of children and adolescents in Mexico are overweight, one of the highest rates in the Americas. For school-age kids, ultra-processed products represented over 30 percent of their total calories consumed.

"The industry is the one that is aggressively marketing what we call predatory marketing, where they will go into poor neighborhoods, and there is disproportionate harm," Crosbie said. "From the health disparity perspective, these policies are geared toward not just helping public health, but they're geared toward helping those that are the most harmed."

Recent studies have shown that nutrition labels show equitable outcomes across economic groups as a useful tool for nutrition intervention.

Beyond food labels, Rito thinks that policies that "restrict and decrease factories' production" and put high taxes on processed, unhealthy foods would help reduce consumption of junk foods. He pointed to regulations on the tobacco industry as an example. Another solution would be to change the culture of junk food, he said.

Crosbie also drew a comparison between soda and cigarettes. "You don't need it: it's just sugar and water, and a lot of chemicals, and there's no nutritional value," he said.

"I think you have to change the entire food system because there's just too much ultra-processed foods and drinks available in the market," Crosbie said. "The access to these products is way too much."

Guajardo wants to see the health consequences of consuming junk foods packed with sugar and salt and other "excess" ingredients included on warning labels.

"The black octagons helped a little bit," he said. "I estimate 10 percent of the parents use the black warning labels when shopping. But most see the labels and don't think about the consequences." Another suggestion from Guajardo: run more information programs and commercials that show what the signs of obesity look like in children.

"Education is the most important," Guadiana said. "Here in Mexico, they're educating young kids to consume a more healthy diet and avoid damaging food. It really starts at home and it's a vicious cycle."

Some educational initiatives like Vida Saludable (Healthy Living) have been added to the national curriculum, but implementation seems to vary. Ivonne Schez Gza works as an administrator for a public primary school in a poorer area of Hidalgo.

"In my school, they don't talk much about nutrition," she said. "They talk a bit about the food pyramid, but it's very minimal. It's brought up again for a week in a natural sciences class, but then they never touch upon the subject for the rest of the school year."

At the public school where her kids attend in a better part of town, the curriculum spends more time teaching about healthy living and mandates parents to pack healthy food for their kids.

A Global Problem—Corporations as a "Vector of Disease"

"Noncommunicable diseases are now 80 percent of the world's deaths," Crosbie said. "Seventy percent of those deaths are attributed to four factors: alcohol, tobacco use, unhealthy eating and drinking, and physical inactivity."

He said that these factors fall under the "Commercial Determinants of Health."

"When we talk about infectious diseases like malaria and COVID, you talk about the vector of disease," he said. "If it's a mosquito that's infecting a bunch of populations, you try to stop the host and that vector of disease. Well, in commercial determinants, the corporation is the vector."

Many low- and middle-income countries have limited resources or state capacity to pass and implement policies to curb the obesity epidemic.

"That's where I think these Latin American countries have done an excellent job, because despite having limited resources, they are producing much more effective policies there than here in the United States," Crosbie said.

"It's a big uphill climb, but you got to start somewhere."

COVID-19 Shows Us It's Time to Tackle Obesity and Overweight