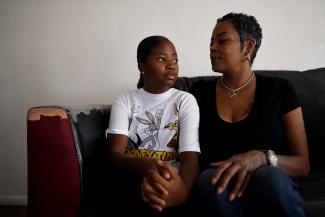 Imani Strong, who has sickle cell disease, is pictured with her mother in their living room, on October 7, 2020. Photo by Hyoung Chang/MediaNews Group/The Denver Post via Getty Images
by Azalea Thomson and Nicholas J. Kassebaum July 12, 2022

In 2019, over half a million babies were born with a disease that causes almost constant, sometimes unbearable pain, for hundreds of thousands of people worldwide. But the most common inherited disorder in the world—sickle cell disease—is something many people have never heard of.

People with sickle cell disease often die young, particularly in regions with low access to life-saving medical treatments. In the United States, patients can live into their mid-50s. In parts of Africa, as few as 6 percent to as many as 99 percent of affected children will die before they reach five years of age, depending on the country. Despite these severe implications, sickle cell disease receives only a fraction of the research funding and medical gains that cystic fibrosis, another inherited disease, attracts. Cystic fibrosis is 10 to 50 times less common than sickle cell disease and predominantly affects white people.

A person living with sickle cell disease at Odessa Brown Children's Clinic in Seattle, Washington, who recently emigrated from Africa, spoke about their experience with the disease. They described living with the disease as being defined by constant health worries, not being able to do as much as other people, and putting in extra work just to stay and feel as healthy as possible.

In some parts of Africa, as many as 99 percent of affected children will die before five years of age

Sickle cell disease is thought to have originated in Africa and became prevalent due to the unique protective characteristic the sickle cell carrier genotype offers against malaria infection. Because of this, sickle cell disease is most common among those of African ancestry, with 70 percent of individuals living with the disease residing in Africa (south of the Sahel), followed by 20 percent in South Asia, and 8 percent in North Africa and the Middle East. In the United States, most, though not all, sickle cell disease patients are Black, stemming from the transatlantic slave trade. Today, about 1 in 365 African Americans and 1 in 16,300 Hispanic Americans are born with sickle cell disease. Similarly, in the United Kingdom, an estimated 6 in 1,000 Black Caribbean and 15 in 1,000 Black African individuals are born with sickle cell disease, higher than the level found across the total population of all race and ethnicity groups. On top of physically debilitating symptoms, people with sickle cell disease often experience racism, social bias, and a lack of recognition by medical providers. Many Black individuals also distrust the health-care system, partly due to past ethical misconduct by medical institutions in research, increasing the likelihood of strained patient provider interactions and a lower quality of care.

Patients with sickle cell disease often have to fight for equal treatment within the health system. When seeking medical care, individuals are forced to navigate health-care provider interactions regarding pain perception, stigma around drug addiction, and appropriate dosing of pain medicines. Dana Jones, an American mother of two teenage daughters, Kami and Kyra, who are living with sickle cell disease, has witnessed health-care workers in the emergency room accuse her daughters of faking their pain to obtain narcotic painkillers, she told the New York Times.

Part of this discrimination is due to the nature of pain in sickle cell patients, the generally poor education and training around pain and pain management in U.S. medical schools, and the historic neglect of sickle cell pain in biomedical research. When sickle-shaped cells block blood vessels, a person with sickle cell disease could experience acute pain (sharp, aching, or throbbing pain) that can be either localized to a certain body part (e.g. hip or arm) or be more generalized. Some sickle cell patients describe the pain as the worst imaginable—worse than untreated pain after surgery and at least as severe as cancer pain.

However, unlike forms of pain such as those experienced with injuries, burns, or cancer, some people with sickle cell pain will not have abnormal vital signs or abnormal lab results, which are typical markers of bodily injury or illness. When treatment focuses on addressing the symptom of pain, but does not fix the underlying problem of blocked blood vessels, it may not provide relief, and patients could simultaneously experience "breakthrough" pain (a term for pain that persists despite treatment with drugs or other therapies).

These compounding factors prolong patients' overall suffering and reinforce their distrust in the medical system. Cycles of repeated and inadequately treated acute pain lead many with sickle cell disease to develop chronic nerve pain that interferes with their daily lives and diminishes the efficacy of existing simple pain treatment regimens. In addition to the documented disparity in the provision of appropriate pain treatment for Black people, the opioid epidemic has created even more reluctance to treat pain in people with sickle cell disease. This means that patients are unjustly forced to tolerate shaming while advocating for themselves in a context in which they are already suffering.

Sickle cell patients and their families have often had to fight for recognition and protection of their rights. In Brazil, the 1995 march Zumbi dos Palmares against Racism, for Citizenship and Life, spurred policy action that led to greater protections of reproductive rights, broader public education, and genetic guidance for people with sickle cell disease. In the United States, Black individuals with sickle cell disease face greater obstacles to disease management due to discriminatory policies resulting in higher rates of poverty and unemployment, and lower health insurance coverage.

Further evidence of systemic racism is exemplified in a 2020 study, that found funding for cystic fibrosis was nearly 3.5 times greater per person in U.S. federal funding and over 75 times greater per person in foundation funding than it was for sickle cell disease funding. Less funding for sickle cell disease translates to lower research productivity and drug development for this disease compared to cystic fibrosis. With a great deal yet to be understood about sickle cell disease’s biologic mechanism, treatment, and cure, this under-investment in research is an enormous setback that harms the quality of life for individuals who are living with the disease.

Lack of appropriate visibility has meant that sickle cell disease is overlooked by international funders, and governments are forced to make tough decisions about resource allocation and policies. For example, in Nigeria, which has the highest number of people living with sickle cell disease, the government prioritized the disease, and in 2013, developed guidelines for diagnosing, preventing and controlling sickle cell disease. However, insufficient training of health-care workers and high costs of treatment have hampered Nigeria's efforts. Nneoma Wokemba, a mother of a young daughter living with sickle cell disease, described the challenges that she experienced seeking care for her daughter in the middle of the night at a hospital. "There I was, standing at the entrance at 1:00 a.m., alternately honking my horn and banging on the door with my daughter screaming in pain," she wrote in a post published on the website of Nigeria Health Watch, a health advocacy organization.

Percent Change in Total Deaths in Children in Nigeria Under Five

Total deaths due to common causes

Additional benefits of well-funded health systems such as routine vaccinations, disease-modifying drugs, and stroke screening and prevention are all standard of care procedures for sickle cell disease patients in the United States, although they are often under-utilized. However, these approaches are often infeasible in countries without reliable access to drugs and other necessary supplies. For example, a study in Nigeria on utilization of hydroxyurea, the most common and highly effective sickle cell disease therapeutic drug, found that while 65 percent of individuals would have qualified for treatment, zero patients were prescribed the drug. Blood transfusions are another important health intervention for sickle cell disease, but in countries without sufficient blood banking systems, the high costs and high risk of blood-borne infections reduces the viability of this option. Only recently has disease cure become possible, thanks to progress in gene therapy research and stem cell transplantation, but these approaches are cost-prohibitive, require finding donors of the perfect match, and carry risk of organ toxicities. Stem cell transplants in the Eastern Mediterranean and African World Health Organization regions comprise just 3 percent of transplants worldwide, highlighting the enormous geographic disparities in access.

Across the world, millions of people who live with sickle cell disease are managing their pain and fighting to live a normal life. While the burden of better-known and better-funded diseases decline, sickle cell disease should no longer be excluded from major policy action. Countries should work to implement screening at birth, integrate comprehensive sickle cell disease care into health systems, improve provider and patient education, and reverse structural racism and discrimination through focused policy and funding. People with sickle cell disease have long been calling for change. It is past time for countries to join their efforts and take action.

AUTHOR'S NOTE: The authors would like to thank the families of Odessa Brown Children's Clinic Sickle Cell Program at Seattle Children’s Hospital and its director, Dr. M.A. Bender for providing valuable input on this post. The authors would also like thank Rebecca Sirull for fact checking the article, and Theresa McHugh, Laurent Grosvenor, and Ally Walker for providing vital feedback.

Azalea Thomson is a third year post-bachelor fellow at the Institute for Health Metrics and Evaluation where she works on the Neonatal and Child Health Team.

The Steep Price of Education in Africa