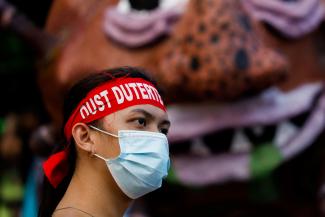 An activist wearing a statement band that writes "Oust Duterte" is photographed in front of an effigy dubbed "Duterte Virus" during a protest in Manila, Philippines on September 21, 2020. REUTERS/Eloisa Lopez
by Richard Heydarian January 20, 2021

Philippine President Rodrigo Duterte may be the most popular elected leader in the world. But he draws his political capital largely from the theatrical deployment of symbols, careful management of his public image, and emotionally-charged rhetoric that taps into the authoritarian instincts of large portions of the Philippines' populace. More than any other Southeast Asian leader, Duterte has forged a new ideology of illiberal populism, better known to Filipinos as "Dutertismo."

The late scholar of populism Ernesto Laclau aptly used the term "empty signifier" to describe this phenomenon, whereby populists utilize intense, affective connection to masses and carefully-curated political fiction to bond with their supporters and allow themselves to remain popular even as objective evidence of their poor governance accumulates.

Populists utilize intense, affective connection to masses and carefully-curated political fiction to bond with their supporters

Besides his own formidable populist skills, Duterte also has at his disposal a massive propaganda machine powered by an organized army of online pro-Duterte trolls, rabid pro-Duterte influencers, and professional networks of disinformation, which have proactively weaponized social media platforms to tout the president and intimidate critics throughout the past four years. There is some evidence to suggest that Duterte has benefited from favorable propaganda spread online by groups based in China and even Russia. Duterte has made improvement of bilateral relations with China and Russia a centerpiece of his "independent" foreign policy. And in the name of law and order, the Filipino populist also has unleashed a years-long violent 'drug war', which has created a profound climate of fear and intimidation.

Duterte proved capable of providing competent governance in some areas, at least before COVID-19. Unlike some other populists, Duterte chose competent technocrats to oversee some areas of policy, especially those related to the economy. Amid sustained economic growth and increased infrastructure spending, Duterte oversaw more than five percent annual GDP growth in his first four years in office.

But his term also coincided with deepening corruption in state institutions, leading to a fourteen-point drop  last year alone in the country's ranking on  global corruption index rankings. His government has overseen massive corruption scandals in the public health and insurance-related agencies. Now, the COVID-19 pandemic has threatened to expose the deep flaws within Duterte’s style of performative populism. Under Duterte's watch, the Philippines has suffered one of the worst outbreaks in Southeast Asia and among the worst economic recessions in the developing world.

In fairness, Duterte took the COVID-19 threat somewhat more seriously than many of his populist counterparts, some of whom stubbornly resisted wearing masks and imposing desperately-needed lockdowns. He also inherited relatively weak state institutions and a fragile health-care system.

Duterte's management of the crisis has been catastrophic

But his management of the crisis has been catastrophic. First, his administration stubbornly resisted imposing travel restrictions on China during the early phase of the pandemic, seemingly more interested in preserving warm relations. Even as neighboring countries began to tighten travel restrictions, mainland Chinese tourists and online casino workers poured into the Philippines.

Once he realized the gravity of the crisis, Duterte moved towards the other extreme, imposing one of the longest and strictest lockdowns in the world. At one point, 75 percent of economic activity was halted, and in the second quarter of 2020 the Philippines posted its worst economic performance on record since the restoration of democracy in the 1980s. Leading experts have criticized this pivot as draconian and unnuanced; one top government advisor was forced into resignation amid rising disagreements.

Unlike with economic matters, where Duterte has relied on technocrats who formed credible policy, he personalized the COVID-19 crisis: like many other populists, he put himself, rather than public health experts, at the center of the response. He has also been over reliant on former generals and policemen without public health expertise to handle important aspects of the crisis, from contact tracing to vaccine purchase.

Despite the Philippines' relatively easy access to international financing, the Duterte administration's economic stimulus was too little and too late, and utterly insufficient to address the damage done. The country's GDP could shrink by almost ten percent in 2020, which will almost surely be the worst economic performance of any country in Southeast Asia and a staggering drop from an average of six percent growth in the past decade.

The damage will be lasting. According to the International Monetary Fund, the Philippines will suffer the worst growth decline in the world over the next five years, followed by India. Despite the worsening economic crisis, Duterte has maintained that lockdowns will continue until effective vaccines arrive en masse, especially from his strategic partners China and Russia.

Meanwhile, Duterte has refused to reserve potentially safer and more effective vaccines from tried-and-tested suppliers in Europe and the United States. To make matters worse, Duterte's rule has coincided with decreased investment in public health as well.

This has culminated in among the worst outbreaks and COVID-19 related death rates in Asia. Overall, according to the international medical journal The Lancet, the Philippines ranked in bottom third of a global survey in terms of managing the crisis. By contrast, neighboring states like Vietnam, Thailand, and Taiwan have had some of the most effective COVID-19 management programs in the world.

Eager to avoid public backlash to his poor COVID-19 response and to pre-empt political opponents, Duterte has used the pandemic to tighten his grip on the country's key institutions. Beginning in late-March, he swiftly secured passage of a series of emergency powers from the Philippine Congress, which is dominated by the president's allies. Those emergency powers, supposedly granted to Duterte to fight COVID-19, could last long after the pandemic ebbs. This consolidates Dutertismo as the ruling ideology of the state, with dangerous long-term impacts on Philippine democratic institutions and norms.

The new powers allow the president to mobilize public and private resources for combating the COVID-19 crisis in a more centralized and effective fashion. But they also grant the government extraordinary powers to clamp down on ‘disinformation’, and provide billions of dollars in supplementary funds with limited legislative oversight. Duterte turned crisis into opportunity by utilizing the ongoing state of emergency to bludgeon the opposition and further consolidate power.

At the height of the lockdowns, Duterte's allies issued a flurry of subpoenas against online netizens who were critical of government policies, and swiftly passed a controversial and vaguely-defined anti-terrorism law, which could potentially criminalize political dissent. They also effectively shut down the country's largest media network, ABS-CBN, by rejecting its franchise renewal, and successfully orchestrated the conviction on dubious charges of Maria Ressa, a prominent journalist and leading Duterte-critic.

In recent months, Duterte's allies also have ramped up a "red-tagging" campaign against progressive and left-leaning groups, reviving Cold War era anti-communist rhetoric that was common in the Philippines in the past. By riding on his personal popularity, suppressing dissent, and providing some cash handouts to the poor, Duterte has seen his approval ratings jump up to as high as ninety-one percent in the third quarter of this year.

COVID-19, and Duterte's further centralization of power in response to the pandemic, presents three interrelated longer-term challenges to the Philippines’ already besieged democracy.

First, Duterte has set a dangerous precedent by using the pandemic to create a "state of exception" in which he has amassed extraordinary powers, frozen normal politics, circumvented normal constitutional procedures, and demonized political opposition in the name of public safety. In effect, Duterte has partly achieved what former dictator Ferdinand Marcos did in the 1970s without even declaring a nationwide Martial Law or formally suspending the constitution. The ensuing climate of fear and intimidation has only reinforced Duterte's ability to maintain his grip on state institutions and preserve high approval ratings, especially when there is little incentive for people to express negative views towards the government, and the possibility of severe punishment for criticism. Future leaders of the Philippines with authoritarian tendencies now have a long Duterte-era playbook to draw from.

Second, a protracted COVID-19 crisis presents the government with a unique opportunity to shape the contours of the upcoming presidential elections in 2022, and perhaps lock in illiberal populism for the long term. Duterte's legislative allies, such as Senator Imee Marcos, have pushed for the extension of this year’s budget until December 2021, just a month before the formal commencement of 2022 elections. This gives Duterte immense leverage to determine the specific range of fiscal allocations and strategic projects, which could unduly favor his preferred successors and allies in the next elections, not to mention the circumstances of the elections itself, including the budget for the enfeebled Commission on Elections. (Duterte was elected in 2016 and Philippine presidents can only serve a single, six-year term.) As one opposition group put it, "the timing of the release of funds may be used or exploited by those who wish to top up their campaign kitties come the 2022 elections."

Lastly, and perhaps most importantly, the unprecedented economic crisis will impoverish Filipinos, likely creating further cycles of social dependency, ideological radicalization, and political patronage and corruption at the expense of democratic deepening. A major victim will be the middle class, which played a central role in the 1986 “People Power” protests that toppled the deeply corrupt Ferdinand Marcos.

Historically, the middle class’s demands for greater political representation and effective governance played a crucial role in the so-called "Third Wave” of Democratization", which toppled authoritarian regimes across the post-colonial world. But as countries such as Chile, Thailand and Turkey have shown in the past decades, period of economic distress and instability can also reinforce reactionary, authoritarian tendencies among sections of the middle class. In the Philippines, too, middle class men and women led a movement in the early 2000s to oust a prior populist elected president, Joseph Estrada, in an extralegal fashion.

Under duress and demoralized after decades of underperforming reformist politics, the country's middle class could become more enthusiastic for authoritarian leadership in the coming years. In a strange twist of events, instead of undermining Duterte's power base and exposing the paucity of his populist authoritarian ideology, the COVID-19 crisis could simply push the Philippines’ fragile democracy over the edge into longer-term illiberalism.

Richard Heydarian is a Manila-based academic, columnist, and the author of, among others, “The Rise of Duterte: A Populist Revolt against Elite Democracy”