On the Ground in Haiti Days After Disaster 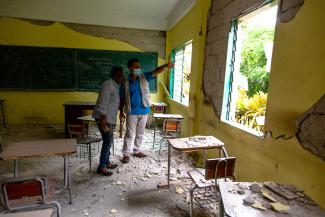 Bruno Maes was in Haiti on August 14 when a 7.2-magnitude earthquake shook the country's southern peninsula. Almost immediately, the UNICEF Representative for Haiti was assessing the damage and putting emergency response operations into action. He spoke with Think Global Health about what's happening on the ground in Haiti since the earthquake and a tropical storm slammed the region.

Think Global Health: First, how are you and your colleagues doing?

Bruno Maes: We are all mobilized. We don't sleep much. It's a lot of work. It's overwhelming in a sense.

Think Global Health: What did you do when the earthquake first hit?

Bruno Maes: I was in Port-au-Prince that Saturday and I managed to reach the south part of the country where the earthquake happened by Monday. It was the first convoy that went through. There was at first a landslide and the road was blocked, but now we have a "humanitarian corridor." We had dialogue with the leaders in the south, making arrangements so that we could bring in a humanitarian convoy and also to bring some patients back to Port-au-Prince to hospitals. It was successful advocacy. On a daily basis now, we can reach the south with protection from the police.

Think Global Health: What did you see as you first traveled south to affected areas?

Many of the health workers themselves were affected. Some of them lost their houses, or their homes were damaged. There was a lot of panic and they were thinking about taking care of themselves and their families. And some of them were also injured themselves. So we had a problem—a lack of health workers and specialists who could treat all of the trauma.

Think Global Health: How are you helping to address the medical needs there?

Bruno Maes: Haiti's Minister of Health immediately mobilized some surgeons and sent them to the south within two days. And UNICEF managed to send a truck and pass through the gang-controlled area with medical kits that were so useful for the hospital. We could set up a big tent outside of the hospital building—patients needed a place to stay because part of the hospital had been damaged.

Think Global Health: Did the storm that moved in after the earthquake cause problems for emergency responders?

Bruo Maes: Tropical Storm Grace caused heavy rain and violent winds until Tuesday evening, so the conditions for the doctors and nurses were really difficult, but at least we could support them with the medical kits and the shelters.

Think Global Health: Did you see a lot of building damage?

Bruno Maes: So many houses were destroyed. And while it did not have the impact of the 2010 earthquake in Port-au-Prince for sure, when you go into the rural areas, it's here you will find houses fully destroyed or damaged. It's widespread—everywhere—big houses and small houses. And sometimes, very vulnerable people who have lost everything, including all of their belongings. There is a lot of desperation, frustration, and the need for shelter. It's difficult to reach everyone quickly in such a widespread disaster.

There is a lot of desperation, frustration, and the need for shelter

Think Global Health: How do you even begin to address the homelessness, the water and food issues, hygiene—just basic needs?

Bruno Maes: The first intervention was the medical intervention. We are still busy supporting the hospital, ordering specific materials and equipment and drugs from sources outside the country that need to reach the country by plane. But the second big intervention is about water and sanitation. The pipeline in Les Cayes was destroyed and so many people lost their access to potable water. So the second main priority of UNICEF is to provide clean water. We gave clean water to thousands of families in Les Cayes and they'll be continually refilled via water trucked in. So UNICEF continues with the distribution of water and provides essential hygiene kits to families in Les Cayes.

We are also starting to respond in the Grand'Anse area [on the northwestern end of Haiti's Tiburon Peninsula]. We [initially] had a problem with the road access because the road was blocked by a landslide. It's now clear, so all of us can reach Grande'Anse by road and facilitate having our team bring supplies and water there.

Bruno Maes: I spent a day with the Minister of Education, Marie Lucie Joseph, to help provide an assessment of the entire education system in the affected regions. We had 94 schools damaged or fully destroyed out of 255 total. Twenty are fully destroyed and 74 are partially damaged. We were only a few days away from back-to-school. It's thousands of children who will not be able to go back as planned to the schools this September. So with the minister, we are talking about how to support them with temporary school shelters.

And Hurricane Matthew of 2016—we are still addressing its impact. There are still communes where the schools were destroyed in 2016 and were never rebuilt.

Think Global Health: It brings up the traumatization of the people of Haiti. So many natural disasters, poverty, political upheaval, violence, loss. Are you able to help address their mental health needs?

Bruno Maes: I discussed this with the Minister of Health and we are thinking that when the children go back to school… we will allocate time to letting them express themselves and what they went through.

Think Global Health: How has the COVID situation been?

Bruno Maes: On the COVID front, we were lucky to have the COVAX donation. We had half a million Moderna vaccines that reached the country five to six weeks ago. Then the government accelerated vaccination with UNICEF and the Pan American Health Organization and World Health Organization support. Fifty-four sites in country were set up to vaccinate. We had 19,000 people vaccinated in the last three or four weeks before the earthquake. This effort is continuing but definitely in the south, the vaccination is discontinued for COVID since the earthquake.

We had eight to ten patients dying from COVID in Port-au-Prince on a daily basis. It's created panic among the population. So more people were wearing masks and respecting the right behaviors. But it's definitely been an issue in Haiti—the adoption of COVID safety behaviors. We distributed face masks, but the situation is tense. There is a lot of frustration on the security side. Some UN agencies had their trucks looted. The population is really affected and tired. This is only one crisis in the middle of other crises.

There is a fragility in the country after the assassination of the president in July, as well. There is an uncertainty as a dialogue is ongoing between the civil servants and private sector and political parties. We all pray this dialogue will bring peace and stability to the country.