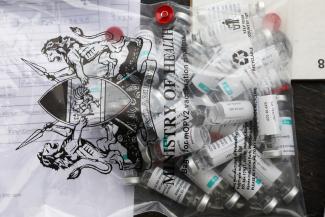 What's behind the development, manufacturing, and supply of billions of doses of COVID-19 vaccines—and ultimately dictates if, how, and when shots get into the arms of people in need? Contracts. The specific language in these contracts is often not fully appreciated and understood by the general public, or even by public health practitioners and policymakers. As COVID-19 vaccines have become increasingly available, hundreds of contracts have played a role in the development, purchase, and distribution of each vaccine candidate and the nuanced language in them matters.

While wealthier countries have vaccinated large portions of their populations and many have even started "booster" programs, only 1.3 percent of people in low-income countries have received their jabs. As global attention focuses on addressing vaccine inequities, often overlooked is the fundamental role of the language in contracts in facilitating—or sometimes limiting—access to vaccines.

Contracts governing vaccine development, manufacturing, purchasing, and distribution aren't a new phenomenon of the COVID-19 pandemic. But with a global death toll of more than 5.3 million and case count of more than 267 million to date, the stakes are higher and the need for vaccines more urgent.

How Contracts Affect When and Where Vaccines are Available

The development of vaccines often starts at small biotech companies or university labs, not large pharmaceutical companies. Vaccine developers need additional funds to make the leap from a promising concept to a product ready for production and, eventually, distribution and shots in arms. This support often comes in the form of development funding or a collaboration contract with a for-profit company, a government, or a non-profit funder. The terms behind these funding contracts, particularly when it comes to global access to vaccines, are driven by the ultimate goals of the contracting parties: vaccine developers and funders.

How can vaccine development contracts support global access to vaccines? One way is by including "affordable pricing commitment" language that requires that vaccines produced be supplied to lower-income countries at a price they can afford. Contracts also can include "supply commitments" to lower-income countries, or intermediary bodies such as COVAX, rather than focusing only on the higher-income countries who can afford to pay higher prices. Access requirements like these are most likely to be found in development contracts with non-profit funders with a goal of ensuring global equitable access to vaccines. Collaborations between vaccine developers and for-profit companies, on the other hand, are unlikely to put "equitable access" terms, rather than profits, at the top of their lists of priorities.

A development funding contract between the non-profit CEPI and Novavax, a for-profit private company, for example, illustrates a development contract that includes affordable pricing and supply requirements. This contract contains a set of equitable access commitments, including negotiation of a supply agreement with a "Global Allocation Body" and pricing that is "reasonable to achieve Equitable Access for populations in need." As a result, Novavax has committed to supply 1.1 billion vaccine doses to COVAX.

Vaccine development contracts can improve global equitable access if funders require developers to share information that can help other potential vaccine developers and producers to create their own similar vaccines. One well-publicized example of a contract with a lack of clarity around information sharing obligations: a 2020 vaccine development contract between the U.S. Government's Biomedical Advanced Research and Development Agency (BARDA) and vaccine maker Moderna. Some have argued that the vaccine development contract (publicly available, but heavily redacted) gives the U.S. government the right to access and potentially share details of Moderna's vaccine manufacturing process. However, some U.S. government officials have said the "data rights" in the contract do not oblige Moderna to share all of its information on how to develop and produce its COVID-19 vaccine. The advocacy group Public Citizen has argued that the contract gives the government "the ability to share significant unlimited rights data, including the commercial-scale recipe." Several U.S. senators have recently gotten involved in the ongoing discussion, requesting in October 2021 in a publicly available letter that the government share more details of its original contract with Moderna with the goal of broader information sharing and greater global equitable access.

To ensure that their constituents had access to vaccines as soon as possible, many national governments and multilateral organizations began signing purchase contracts with vaccine developers as early as March 2020, when the World Health Organization first declared COVID-19 a pandemic. At the time, the potential urgent need for COVID-19 vaccines resulted in a flurry of contracts called "advance purchase agreements" (APAs), through which purchasers committed to buying vaccines—and paying for them—before they were manufactured, or even proven effective and approved for use.

The United States and United Kingdom benefited from such contracts during the pandemic, giving them early access to COVID-19 vaccines. Purchasers in these situations take on the risk that a vaccine developer may not succeed in manufacturing an effective and approved vaccine. Having contracts with multiple vaccine developers can mitigate risk for governments, but most countries don't have the funding to adopt this approach.

APAs raise the issue of "liability protection" sought by vaccine developers. Purchase contracts usually involve vaccines that have received full marketing authorization. Vaccine developers, in general, must accept liability for injury caused by the vaccine (for example, they must pay compensation and legal costs). However, COVID-19 vaccines have, to date, been used under emergency or conditional authorizations. Some countries have laws, such as the U.S. Public Readiness and Emergency Preparedness (PREP) Act, that provide liability protection during public health emergencies. However, most countries have neither equivalent legislation nor the negotiating strength of the United States. Some vaccine developers, it has been reported, have made excessive demands on developing countries, resulting in protracted contract negotiations that delay access to vaccines.

Contractual liability terms also have an impact on donation of doses to other countries. The PREP Act, for example, provides liability protection only within U.S. territories. Until the recent signature of an additional contract with Pfizer, the U.S. government's purchase contracts have permitted use of the vaccine  only within the United States. By contrast, the European Union has negotiated purchase contracts that explicitly allow donations to other countries if the recipient country accepts the same terms and conditions as the original contract, including liability protection.

A lack of transparency in government contracts comes, in part, by heavy redaction of agreements that are in the public domain

Many of the COVID-19 vaccines currently in use have received some government funding, mostly from high-income countries. Exactly what each government gets in exchange for this funding is not clear. This lack of transparency in government contracts comes, in part, by heavy redaction of agreements that are in the public domain. Contracts in which government funding has not been involved often are not in the public domain, as other funders and partners are not required by law to publish them. In addition, the effective COVID-19 vaccines being administered around the globe have mostly been financed by a combination of public and private funds.

Greater transparency around vaccine contracts and the specific language in these contracts can contribute to greater equity in vaccine distribution. In this spirit, the Global Health Innovation Alliance Accelerator, GHIAA, has developed an online searchable database of contracts and contractual provisions designed to make contract language, including language from current COVID-19 contracts, more accessible to policymakers and others. (The publicly available redacted clauses of the contract between the U.S. government and Moderna, mentioned above, for example, are included in this database.)

A multitude of factors contribute to vaccine inequity. The impact of contractual determinants and language in contract provisions, however, should not be underestimated. Development and purchase contracts are just part of a complex web of contracts that ensure safe and effective vaccines reach those in need. Transparency and more sharing of "best practices" may increase the chances of achieving more equitable distribution of vaccine doses during the continuing global pandemic and beyond.