Go to homepage
Finally "Inside," New Office of Global Affairs Director Is Looking Out
Governance

Finally "Inside," New Office of Global Affairs Director Is Looking Out 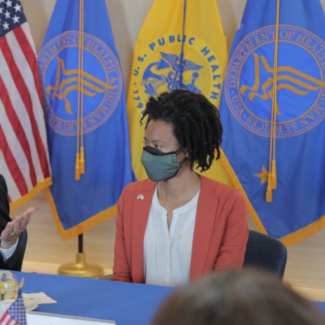 In March, the Biden Administration tapped global health advocate Loyce Pace to direct the Health and Human Services (HHS) Office of Global Affairs (OGA). During the past four months, she has been at the center of the United States’ response to the pandemic.

Prior to her appointment, Pace served as the executive director of the Global Health Council, where she mustered support for reengagement with the World Health Organization (WHO) among other endeavors. She also previously focused on cancer-related issues at the Livestrong Foundation.

Think Global Health spoke with Director Pace in June about being a part of the government she had long clamored to influence from the outside.

Think Global Health: When you came into your OGA role, what opportunities did you see?

Loyce Pace: I was most interested in continuing to leverage all that HHS has to offer in the global space. And obviously, we're still very much in this pandemic, so I think any focus continues to be on the global COVID response.

At OGA, we are readying ourselves for what's happening now, which is a transition from a hyper focus on domestic work to encompass what the United States can do on an international scale.

"While in some places there is rightfully a focus on recovery, that feels premature in many parts of the world"

Think Global Health: What are the ways that you feel OGA is most influential?

Loyce Pace: There are a couple of key examples, like the emergency responses in India and Brazil. Those were flagged by health attachés that report into the Office of Global Affairs: Dr. Preetha Rajaraman and Captain Amy DuBois. They both have been working in-country the past several years, enduring this pandemic and understanding what the national needs are. They are not just liaising with their ministries of health, but actually being tasked by the highest level of government in each of those countries to understand what the needs are. And then as OGA, we're able to help communicate those requests to Washington and to organize across various departments here and captain that response in an effective way. Not to mention coordinating with the WHO and the Pan American Health Organization (PAHO) to understand what other countries are trying—a comprehensive approach to how we deliver support in-country, let alone how we sustain that support so it's not just putting products on a plane.

Think Global Health: In the United States, it seems there will increasingly be a disconnect between people's perceptions of where we are in the pandemic domestically and where we are globally. Are you seeing that already, and what challenges does that create?

Loyce Pace: Sitting at HHS is an interesting vantage point because we have a front-row seat to how we're tracking the pandemic within our borders and how the U.S. Centers for Disease Control and Prevention is tracking these trends abroad. While in some places there is rightfully a focus on recovery, that feels premature in many parts of the world where they're still very much in the thick of a response, and so how can we balance the two?

It's still important to have a conversation about recovery and resilience as part of this “rebuild” mantra, and we needn't wait until we're over a response to have that discussion. Yet, we want to be careful, so none of our partners and local citizens feel left behind by seeing us [broker] those conversations. It's very important that those conversations are taking place alongside a very active engagement that addresses these outstanding gaps, whether it's with regards to vaccine equity, or other needs that are still in front of us today.

And then helping a wider audience understand not just where we are from a very narrow perspective, but where the world is. Not just to justify what we do, but also to help folks understand how interconnected all of this truly is. Just listen to the conversation on the variants; it's important that everyone understand how this is evolving, so that they can ready themselves for how we might need to continue to respond.

Think Global Health: In terms of the role that the United States is playing in global access to vaccines—the recent commitment of 500 million doses, the position with regard to the TRIPS waiver—is there anything to be said about how those decisions came to be made? Are there any other initiatives that are being contemplated?

Loyce Pace: I think it's fair to say that we've played a central role in a couple of key pillars of the President's commitments. One of the first things the President did was commit $4 billion to GAVI, as a partner in the COVAX initiative. Half has been dispersed; the other half will be used toward this additional 500 million vaccine dose commitment. OGA had been working toward this type of framework well in advance of the announcement because we needed to obviously ready ourselves.

Another story is the scaling piece, around decentralizing the response. There is just too little manufacturing capacity specifically for vaccines and other innovations. We've learned this through this response, that our supply chain and our distributors are being particularly taxed now that the entire world needs them. So, something else the President did early on was to establish a partnership [with India] to help drive more regional capacity to produce vaccines. That can happen in other parts of the world too, like the Republic of Korea-U.S. partnership that was unveiled last month. There's also work with the government of South Africa. That's been important for us to be engaged in pretty closely and quietly.

Think Global Health: What changes had OGA weathered during the previous administration? What, if anything, did you do to change how it operates?

Loyce Pace: The really significant piece, when we just look back to the past year, is where the previous administration landed regarding U.S. engagement with WHO. This president was able to come in and reengage with WHO in ways that we felt were essential. And that was also a shift for OGA, which manages that relationship. That's a long-standing, ongoing relationship that's ideally not a political one; ideally, it's technical and focused on the work that needs to be done. There's an essential role that WHO plays as a global public health convener and coming back to one of your other questions, that's a really key role for OGA.

Think Global Health: Outside of COVID, what are your other priorities?

Loyce Pace: There's everything else, right? We have a President's Emergency Plan For AIDS Relief (PEPFAR) team, and related, I sit on the Global Fund board, so we want to be sure that whether we're talking about HIV, TB, and malaria—that we're keeping our foot on that gas, and being mindful of ways that the people being served by those programs might be left behind in a COVID-19 pandemic.

We're tracking, specifically, the effect that COVID is having on women and girls, revisiting a lot of the positions that the previous administration had related to sexual and reproductive health rights but also broadly on equity—whether that's racial equity or how we lift up the LGBTQ community and their needs.

Noncommunicable diseases have been a global problem for an extended period, and yet it's been challenging to maintain focus on that as a global emergency in its own right. So, we're talking about how we can turn the spotlight back towards NCDs as an emerging issue. The connection between climate and health—that might be a bit farther out on the horizon but we don't want to miss the opportunities to connect the dots.

"What about this could be shared? What is the opportunity or obligation for true collaboration and partnership with other countries?"

Think Global Health: You mentioned PEPFAR earlier. It's regarded as a singular achievement and a demonstration of the power the U. S. government has to impact millions of lives. Thinking ambitiously, what would be the next PEPFAR?

Loyce Pace: That's assuming it should look like a PEPFAR, right? If we unpack PEPFAR, it’s critically important even today, but that looks like the U.S. leading and launching an initiative that lasts decades. You also have the Global Fund, which the U.S. had a great hand in establishing. It is multilateral instead of bilateral, an ambitious agenda, and on a global level. You also have initiatives like the Global Health Security Agenda, which came about in the wake of the Ebola crisis, which was more decentralized and country-led. So, I do wonder how we analyze this full ecosystem of options to even consider what hasn't been brought to the table.

I see the sands shifting in this space: how do we leave room for regional or local leadership? It's not to say the United States can't have a pivotal role, but what about this could be shared? What is the opportunity or obligation for true collaboration and partnership with other countries, or for donors or countries or communities themselves? I don't know what [the answer] is, but I think that needs to be the conversation. I would want us to resist immediately moving towards what we know, because we've done quite a bit of what we know and there's a lot that we've learned. It's what we didn't know but thought we did—the power of knowing what you don't know, and bringing that to the table. That level of humility is important.

Loyce Pace: It is still sadly a tough sell for many people. I don't want to say that it's just about messaging—and yet messaging is a big part of our challenge. One starting point could be health workforce; in the past couple of years there's been a spotlight on health workers and the fundamental role they play in health systems. Without a strong health-care workforce, one will not have a strong health system—very basic. Maybe start there. I am hopeful that a focus like that could be a starting point and could open the door to a broader conversation, especially if we're listening to these health workers themselves.

Think Global Health: As somebody who worked so long exhorting the U. S. government from the outside, what has it been like to transition to the inside?

Loyce Pace: I have been truly moved by how productive things have felt here, and I'm very clear that there's still a lot more to do. Something else that I didn't anticipate is how great the pressure would be, how broad the mandate is even on the inside. As an advocate, I felt that nothing could beat that feeling of responsibility and that passion for getting the job done, and I have been proven wrong. I absolutely feel that, and then some. Because I feel accountable to everyone—to all of the previous versions of myself and to everyone who's still on the outside. That's not all on my shoulders, certainly that's shared, but it's a very important feeling for me to sit with. A recognition that there is absolutely so much to do, and an absolute readiness and willingness to get it done.

EDITOR’S NOTE: This interview was conducted via Zoom and has been edited for length and clarity.