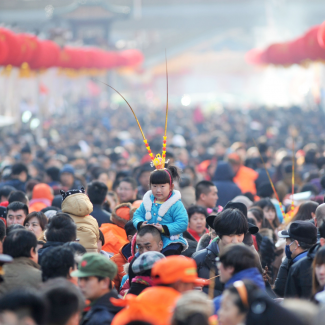 On November 15, 2022, the world will celebrate the Day of 8 Billion, when the world's population is set to hit 8 billion people—a milepost due in large part to global advances in health. Innovations and improvements in health care—including disease prevention, new treatments, better nutrition, and progress in maternal and child health—are allowing people to live longer, healthier lives.

The global population reached three billion in 1959 and hit other "billion" milestones in 1974, 1987, 1998, and 2010. New research identifies countries with the largest contributions to the "billion" marks for previous milestone years. While China's contribution has decreased substantially, countries including Nigeria and Pakistan contributed more to population growth. Currently, population growth is slowing and expected to reach peak population in the coming decades.

Changes in population in the years ahead—driven by decreased fertility rates, increased life expectancy, and migration—will affect how countries continue to grow, govern, and thrive. For example, nations in sub-Saharan Africa, which continue to see large population growth among younger age groups, may begin to see growth slow due to declining fertility rates.

Percent Contributed to Each Billion by Country

The growing population in this region will require more resources to care for the expanding population. In contrast, countries already experiencing low fertility rates will see a population shift toward older age groups that will also need health resources and support.

Moving forward, there will be unique opportunities for each country to support their population and a need for intentional efforts aimed at creating sustainable public health services that navigate the implications of lower fertility, shrinking workforces, and aging populations.

ACKNOWLEDGEMENTS: The authors would like to thank Erin May for fact checking the post as well as Dr. Austin Schumacher and Annie Chan for providing feedback.

Haley Comfort, MPH, is a researcher at the University of Washington's Institute for Health Metrics and Evaluation (IHME).


Stefanie Watson, MS, is a data specialist at the University of Washington's Institute for Health Metrics and Evaluation (IHME).