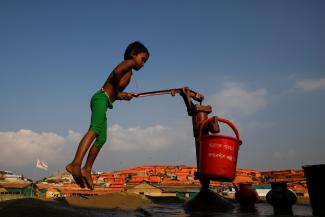 As if this situation were not terrible enough, there is an additional cruel and ironic twist to the plight of Rohingya refugees: in only a few years, these refugees may become climate refugees. Sea level rise and intensified cyclones are escalating Bangladesh's climate migration crisis, forcing out citizens and refugees alike. At the same time, the Bangladeshi government is now planning to move refugees from current camps in Cox’s Bazaar—which experiences 40 percent of the world’s storm surges—to Bhasan Char, a silt island three hours away from the mainland that is also prone to extreme flooding and cyclones. In short, a catastrophic influx of water is likely to displace the same people most in need of that scarce resource now.

Whether this dismal future comes to pass for the Rohingya in Bangladesh and other refugees in similar circumstances will depend on how governments prepare today. At a global level, this means adapting the international legal framework to better address the challenge of climate refugees. Although the United Nations does recognize access to safe, sufficient, and affordable water as a human right, water security is at best tenuous for most refugees, and for the Rohingyas in Bangladesh, nearly nonexistent. Climate refugees are a relatively new concept that only gained recognition from the voluntary and nonbinding UN Global Compact on Refugees in December 2018 and it does not yet have the same legal protections as refugees fleeing violence or persecution. Water is not explicitly outlined as a protection for refugees, whose definition and rights are enshrined in the 1951 Convention Relating to the Status of Refugees and its 1967 Protocol. This lack of official refugee status exacerbates basic water, sanitation, and hygiene (WASH) issues.

of water rations cut in a refugee camp

The majority of refugee camps do not meet the minimum daily water requirements for drinking, hygiene, and cooking. A recent report from the Observer Research Foundation (ORF) highlights the consequences of these humanitarian failures: polluted water, tube-wells that are too far away for women to safely reach, avoidable exposure to water-borne pathogens, fatal cases of diarrhea in children, and more. “The Rohingyas who have been denied refugee status in Bangladesh lack access to WASH facilities,” the ORF report notes. “The unregistered camps are overcrowded, with few supplies and major management issues.” Like the Rohingyas that have been denied refugee status, climate refugees without status under international law will not only have to confront the loss of their homes but also do the impossible: survive without clean or sufficient water.

Addressing the challenge of climate refugees should start with realizing legal recognition and preparing WASH programs to meet their needs.

First, the definition of refugee in the Convention Relating to the Status of Refugees should be expanded to include those affected by climate change—the first step toward meaningful rights. Officially recognizing climate refugees under international law will help to ensure that they are not sent back to their home countries, where they would again endure the droughts, floods, or water insecurity that made them flee in the first place. One of its major protections would be particularly useful for climate refugees: countries cannot expel them. Climate-driven water issues, from drought to flood-induced epidemics, transform homelands into inhospitably wet, dry, disease-ridden, or infertile regions. Lacking recognition, climate refugees can be sent back to these deadly living conditions without a second thought.

Second, humanitarian and aid agencies should develop WASH programs that can handle larger refugee populations in more vulnerable areas. After all, like the Rohingyas in Bangladesh, becoming a refugee may also mean needing new safeguards against camps’ climate vulnerabilities.

It’s not too early to start working toward improving access to basic health services for those likely to become climate refugees. Given that, over the next decade, climate change even has the potential to spur the world’s largest refugee crisis, waiting even a few more years may become too late. Improving access to clean water in refugee camps would not only protect refugee health but also protect global health by preventing the spread of infectious disease, which has been a concern in Bangladesh’s camps for years.

The unregistered camps are overcrowded, with few supplies and major management issues...

Third, countries can also try to stem the tide of refugees by investing in climate resilience. Climate resilience will not prevent everyone from moving or solve all challenges that come with extreme weather, but it can enable nations to better prepare for the worst of climate change with sea walls and drought-resistant crops. Operating at two levels—from global recognition down to an individual person’s safety—is our best hope at aligning global health ideals with practice and enabling refugees to finally experience their human right to safe water.

Governments and aid agencies should come together to confront climate refugees’ challenges at the water-climate-health nexus. Otherwise, today’s Bangladeshi refugee camps may foreshadow a future of environmental and social upheaval that defies borders and jeopardizes the health of the world’s most vulnerable people.