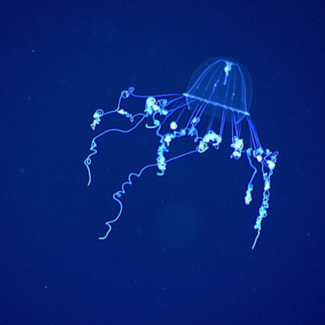 "This is an amazing living planet. It's a rock, like so many rocks in space, except that it has this web of life surrounding it. And the majority of that is in the ocean."

Edie Widder, deep-sea explorer and president and senior scientist at the Ocean Research and Conservation Association (ORCA), which she co-founded in 2005, is talking about why humans need to protect the ocean. And not just the part we see, but its murky, deepest depths.

While it's often bandied about that the ocean makes up 71 percent of the Earth, Widder says that stat only includes surface area.

"Life exists into the tallest trees and deep into the soil on land. But that's an incredibly thin layer compared to the depths of the ocean. If you figure it by volume, then the ocean represents 99.5 percent of the living space on the planet, the biosphere. So clearly, it's an enormous part of that life machinery about which we know surprisingly little," says Widder, a former senior scientist at Harbor Branch Oceanographic Institution at Florida Atlantic University, and an expert in bioluminescence.

Humans have a history of exploration followed by exploitation. But in the ocean, we've actually exploited it before we've explored it

While human life on Earth has always depended on exploration—figuring out what food is safe to eat, what animals can be hunted, the use of fire—ocean exploration is a bit of an outlier.

"We are, by nature, explorers. Humans have a history of exploration followed by exploitation. But in the ocean, weirdly, we reversed it. We've actually exploited the ocean before we've explored it," Widder says, noting that humans have explored less than 5 percent of the ocean.

A pivotal reason for exploring, preserving, and reversing the damage already inflicted upon the ocean is that its deepest realms are intricately intertwined with human health, and in fact, harbor disease-fighting properties.

Drugs and Other Secrets at the Bottom of the Sea

One scientist who has spent his entire career plumbing the watery depths of some of the world's warmer climes, is William Fenical, distinguished professor of oceanography and director of the Center for Marine Biotechnology and Biomedicine at Scripps Institution of Oceanography, at UC San Diego. He investigates chemicals found in marine plants, animals, and microorganisms that have pharmaceutical potential. Early in Fenical's career, he was drawn to this unexplored area of science.

"Going way back in 1930, a scientist in England called Alexander Fleming discovered a bacterium that produces penicillin. And this alerted the community to the fact that microscopic organisms are producing chemical compounds for a variety of purposes, but that these can be turned into human medicines," Fenical says.

For a long period of time after that, for some fifty years, the pharmaceutical industry invested very heavily in the discovery of new drugs from microorganisms in the soil.

"They were frightened of the ocean," Fenical says, explaining that he and several colleagues were asking themselves the question, why not study the ocean given how much of the Earth it covers? He says there were detractors in the terrestrial microbiology community who said that there was nothing unique in the ocean, that it simply contained all terrestrial microorganisms that got rinsed into the ocean.

"The ocean is by far the most biodiverse component of the planet with thirty-four phyla, while only seventeen phyla occur on land. So, I set out to ask the question, are really all of the microbes in the ocean terrestrial and well known? And we started looking," he says.

Ocean microbes turned out to be genetically unique—almost all of their samples, not only the microbes, but the macroscopic organisms, plants and animals, were also producing compounds that contributed to their own survival.

"These are chemical defenses by and large, or chemical communication mechanisms. The ocean is a fabulous frontier," Fenical says.

Working on plants and collaborating with ecologists, he learned that when you find something that's got a chemical defense, it's going to have some kind of fundamental biological properties.

"Around 1989, we decided in a very serious way to begin developing drugs, and we chose microbes [instead of plants] for a very good reason. Invertebrate animals and plants have wonderful compounds, but you can never get enough of them because you can't go along the coastline and take two tons of beautiful coral reef," he says.

And, he added, "We realized that the microbes had been completely unexplored and that microbes can be grown in infinite volume."

To collect samples, the scientists use remote sampling devices that they drop from boats, down thousands of meters into the ocean. When they hit the bottom, they take a bottom mud sample, then bring it back up with an electric reel. Then the samples head to the lab. Initially, there were hurdles to be leapt in the lab. They needed to develop new equipment to test and develop the samples they collected, using saltwater as part of their culture liquid.

"We had to use different nutrients because marine bacteria don't tolerate and respond to the same cultures used in soil cultivation. We found that a sizable percentage of bacteria and fungi in the ocean actually required seawater to grow," he says, explaining that sea water is very caustic and corrodes the insides of culture vessels, metal culture vessels.

It took years of work to learn how to culture samples well from the ocean. And in the process, they started using genetic tools to identify the microorganisms.

"We started to see highly bioactive compounds and we found several molecules that looked very promising. He and colleagues started a small biotech company to develop some of the compounds they found—"fabulous anti cancer agents."

"They are currently in very, very late, stage three, phase three clinical trials—one for glioblastoma and the other for non-small cell lung cancer," says Fenical, noting that they started receiving significant research support from the National Cancer Institute (NCI).

NCI has played a pivotal role. "They have a bioassay involving sixty different cells, cultured in vitro, not in humans. They take our samples and test them in all sixty cell lines, looking for selectivity and potency," says Fenical.

Exploring the microbes from the seafloor near the Bahamas—he works in the tropics where biodiversity is highest—to date, Fenical has discovered a bacterium that produces chemicals that, in controlled experiments, appear to inhibit the growth of melanoma and colon cancer cells, the herpes simplex, and AIDS viruses. His research team also discovered a bacterium from a jellyfish that can kill certain human cancer cells and may also control the inflammation linked to arthritis and asthma. One of his discoveries, called pseudopterosin, is used in skin creams. And his team's glioblastoma drug—for aggressive brain cancer—was purchased by Bristol Myers Squibb, a global biopharmaceutical company.

In Europe, nobody's allowed to introduce anything into the environment until it's been proven safe. In the U.S., it's innocent until proven guilty

Other groups of scientists are prospecting the deep sea for disease-beating drugs, too. In one study, scientists from the United States and China reported on sponges as a source of microbes with anti-infective properties.

Other pharmacologically promising chemicals derived from the deep sea include ecteinascidin, which is being extracted from tunicates (a marine invertebrate animal) and tested as a treatment for breast and ovarian cancers, and other solid tumors, according to the National Oceanic and Atmospheric Administration (NOAA). The chemical w-conotoxin MVIIA, extracted from cone snails, is being investigated as a painkiller.

New Zealand red algae Griffithsia is the source of an anti-viral protein, Griffithsin (GRFT), which some researchers are exploring for its virus-fighting potential. It is currently under early investigation in COVID nasal spray trials.

While Fenical focuses on the smallest microbes from the ocean floor, Widder continues her mission to protect and preserve the ocean depths, where ecological balance is essential to the overall health of the planet.

"It makes no sense that people complain about paying taxes, saying the government is reaching into their pockets and taking their riches, yet we reach into the planet's pockets every day and take from it. And there's no compensation. It feels like it's a free-for-all, which makes no sense. We should be paying for ecosystem services," says Widder.

One of ORCA's current initiatives is to figure out where pollution is entering the ocean and stopping it at its sources. To learn more, they create pollution maps that look like weather maps, for toxicity—for nitrogen and phosphorus levels in the water. And they can see where some of the pollution sources are coming from.

"We have to be more cognizant of what we're doing to the environment. We're seeing contaminants of emerging concern and toxins ending up in deep sea fish, and squid," says Widder, who was recently involved in a project looking at bioluminescence as part of the carbon pump, and visualizing the carbon pump through the bioluminescence in the ocean.

"It just blows my mind that in Europe, nobody's allowed to introduce anything into the environment until it's been proven, safe, innocent. In the United States, it's innocent until proven guilty."

EDITOR'S NOTE: Visit our "Frontiers" series page to learn more about global health in the Arctic, space, the mountains of Lesotho, and more.