Go to homepage
Changing the Course of Cancer in Mongolia
Governance

Inspired by her physician grandmother, Dr. Tsetsegsaikhan Batmunkh has strived to improve care in the East Asian nation 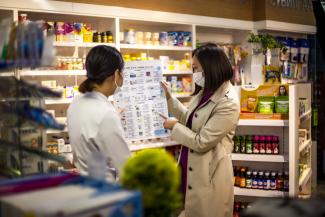 Mongolia has long suffered high rates of cancer mortality, but the statistics have been improving over the past decade due to significant government intervention. Dr. Tsetsegsaikhan Batmunkh has been at the center of it. A medical doctor and microbiologist, she began her career as a general practitioner in a remote area of the country and later worked for the Ministry of Health before starting the non-profit National Cancer Council of Mongolia, which focuses particularly on health advocacy and supporting patients. She was recently appointed as a director of the new Medicine and Medical Device Regulatory Agency of Mongolia. She recently spoke with Think Global Health about fighting misinformation, HPV vaccines, and Mongolia's response to the COVID-19 pandemic, among other topics.

Think Global Health: From the beginning, why did you have such a strong interest in medicine?

Tsetsegsaikhan B: My grandmother was the first female oncologist in Mongolia. She was one of five doctors who set up the Cancer Hospital in Mongolia, and later she was the head of the gynecologyoncology department of the National Cancer Center in Mongolia. Her main area of work was cervical cancer because this was the leading cause of cancer at that time among women. And I remember that there were a lot of patients coming from the countryside for treatment, and most of them were very late-diagnosis cases. She was doing a lot of surgeries every day, doing a lot of consultations and advocacy-training for the women, and giving a lot of interviews to the media about how to prevent cervical cancer.

"My grandmother was the first female oncologist in Mongolia"

Think Global Health: How would you describe the health sector in Mongolia today?

Tsetsegsaikhan B: Compared with high-income countries, we are far behind, but compared with some low- and middle-income countries, our health sector is not that bad. We have a relatively good health system structure, with family clinics and general practitioners throughout the country, hospitals in all provinces, and a good patient referral system. But still there are a lot of things we need to strengthen or improve. The geographical distribution is a difficult challenge. Climatic conditions are a big factor: we have really harsh winters.  Imagine delivering care to really remote areas you can't reach by ordinary car. Sometimes doctors need to ride a horse or camel to reach families. I admire doctors who are working in really rural and remote areas because it takes a lot of dedication.

Think Global Health: What does cancer look like in Mongolia?

Tsetsegsaikhan B: Cancer is the second-leading cause of mortality in our country. Compared to global data, the prevalence and mortality of cancer are very high. Liver, stomach, lung, cervical, and esophageal cancers are the top-five. These are types of cancer that can be prevented through public health interventions, through education, through vaccination, and early screening. Most importantly, two-thirds of cancers are diagnosed at late stage. In the 1990s, around 75 percent of cancers were diagnosed at stage 3 or 4, and now, 30 years later, the picture is still the same: around 72 percent of cancers are diagnosed at late stage. So, we have a really sad story with cancer in our country.

Think Global Health: What are the biggest opportunities to change that trend?

Tsetsegsaikhan B: The government has done a lot to reduce liver cancer, through vaccination programs, screenings, and providing good treatment policies and options. We started a Hepatitis B vaccination program in the 1990s, so the prevalence has been decreasing over the years.

Hepatitis C is a challenge. For the last five years, the government has run a liver cancer free program: screening is covered by the health insurance, and most of the fee for treatment is covered by the government. Medicines that are really expensive in the United States are provided at a discounted price, due to government negotiation with the manufacturer. Due to this, the number of cases that are diagnosed early is increasing, and people can get early treatment with good medications.

In Mongolia, 72 percent of cancers are diagnosed at late stage

Think Global Health: How does gender influence the diagnosis and treatment of cancer in Mongolia?

Tsetsegsaikhan B: Even now, we still have stigma around female cancer, especially cervical cancer. Some of the risk factors are having an early sex life, having multiple partners, and this causes a lot of stigma around this cancer. Even partners and husbands don't understand this. When a wife is diagnosed with cervical cancer, they think she did something wrong. Some partners even leave their wives because she got cervical cancer. So it's still a lot of misunderstanding and misinformation among community about female cancers. And this is one reason for late diagnosis, because women don't see a doctor on a regular basis for the screening out of fear.

Think Global Health: What has been the focus of the National Cancer Council?

Tsetsegsaikhan B: We tried to focus more on prevention, treatment, and support services. Because liver cancer was the main point of concern of the government, our National Cancer Council focused mainly on cervical cancer. The main cause of cervical cancer is the human papilloma virus. We had a really sad story with HPV vaccination in Mongolia because we were one of the pilot countries in the Western Pacific region to have HPV vaccination in 2012, supported by the United States' Millennium Challenge Corporation. We were vaccinating girls from age 12 to 15 in two districts of the capital city and two provinces with high prevalence of sexually transmitted diseases and cervical cancer—and suddenly a group of women came along and spread the message that the vaccination was unsafe and the vaccines were causing infertility. And because of this misinformation, a lot of mothers turned against this vaccination, and vaccination programs stopped.

Think Global Health: How did you make sense of the opposition to this vaccine?

Tsetsegsaikhan B: It was mostly a political issue, because that year was a parliamentary election year. Opposition parties wanted to convince the public that the government was not working or doing something bad. It was a really shocking experience for our country. We have really good immunization coverage—more than 95 percent of children are fully vaccinated, and there has never been an issue with vaccine skepticism. But with the HPV vaccination, we had really different story, and it negatively impacted childhood immunizations as well.

Tsetsegsaikhan B: I had conversations with different stakeholders who were afraid of talking about this vaccine, and I decided that we needed a really good research –base, to provide evidence. That's why we conducted a study of all girls who had been vaccinated previously, and showed the vaccine was really effective for the types of HPV that cause cervical cancer and there was no difference in fertility.

Then we focused on health professionals and the Ministry of Health, talking about reintroducing the HPV vaccine. It took us almost four years, but the government finally decided to start vaccination and now the vaccine is available on a voluntary basis. So proper communication is very important for the new vaccine introduction.

"It took us almost four years, but the government finally decided to start HPV vaccination"

Another big risk-factor for cancer is tobacco. When I was working at the Ministry of Health, it took us several years to pass the Tobacco Control Law. At that time, smoking indoors in restaurants was not prohibited and people could smoke wherever they wanted, but restaurant owners or business people were against the law. Then when I was at the National Cancer Council, for several years we tried to advocate for increases in tobacco taxes—we advocated that the tax should be increased year-by-year—but we didn’t succeed because it's really political. There are a lot of powerful people behind the tobacco business. And still, the percentage of tax for tobacco products is really low in our country.

Think Global Health: When you were offered your role at the Medicine and Medical Device Regulatory Agency, what did you see as the opportunity?

Tsetsegsaikhan B: Our government has been trying to set up this new agency for the last 10 years; finally, last December, the Parliament established the agency. The new agency gathers professionals who were previously scattered across the Ministry of Health, as inspectors, in the lab, so it is really historic. Our main priority is to become part of the global community regulating medical products and medicines, and there are a lot of things we need to learn: how to properly monitor medicines, how to avoid substandard falsified medicines, and now with COVID-19, how to deal with new vaccines, how to evaluate safety and adverse reactions, and which kind of new medicines should be introduced.

Think Global Health: COVID-19 is still front-page news in much of the world. In general, how has Mongolia's response been?

Tsetsegsaikhan B: In general, I think our government didn't do too bad. At the start of the pandemic we closed the borders and had really strict measures because we neighbor China. And we've done a great job with vaccination: we have vaccinated most of the eligible population, and through other direct procurement and donation the government has provided many different options — Sinopharm, Sputnik, AstraZeneca, and Pfizer—so most of the population could have some choices. But the Delta variant has been increasing over the last two weeks, so we need to consider some booster dosing or other options for preventing its spread.

EDITOR'S NOTE: This interview was conducted via telephone and has been edited for length and clarity.