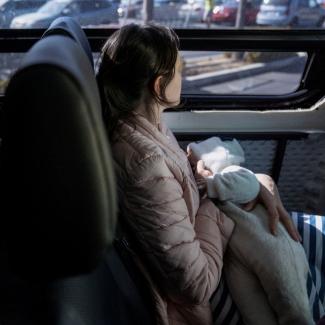 A woman who fled Russia's invasion of Ukraine breastfeeds her baby after crossing the border from Ukraine to Poland, at the border checkpoint in Medyka, Poland, on March 16, 2022. REUTERS/Zohra Bensemra
by Allison Daniel June 16, 2022

More than 100 days into the tragic war in Ukraine, keeping children healthy and safe is a priority for humanitarian organizations and international agencies involved in the response. As the relentless attacks continue to destroy essential services, including hundreds of health resources and facilities, providing support to parents who are breastfeeding and using breastmilk substitutes, such as formula, is critical to the survival of babies caught in and affected by the conflict.

In crisis situations, malnutrition and disease, which often go hand-in-hand, are common and can cause a child's health to deteriorate quickly. In emergencies, the chance of infection is elevated and diarrhea becomes a major cause of child deaths. The younger the child, the greater the risk, especially for those less than six months old.

Breastfeeding offers protection during emergencies, according to the World Health Organization (WHO). It is protective largely because of bioactive components, including antibodies and oligosaccharides, that fight off infection—most of which cannot be replicated in formula. WHO recommends that breastfeeding start within the first hour of a newborn's life, that exclusive breastfeeding continues for the first six months of life, that foods in addition to breastmilk be given once children reach six months, and that breastfeeding is continued up to two years of age or beyond.

Formula feeding also provides nutrition, and is an alternative choice for parents, including those struggling to keep up breast milk production. Infants on formula, or other breastmilk substitutes, though, may be at higher risk for health issues during crisis situations due to contaminated water sources (powdered formula requires mixing with clean water), or contaminated formula. Consistent access to formula may also be an issue.

A 2012 survey indicated that Ukraine had relatively low breastfeeding rates before the current war, with one in every five infants under the age of six months being exclusively breastfed. One in four was exclusively breastfed during the 2015 Ukraine crisis, according to UNICEF and the World Food Programme. For parents formula feeding their children, there were serious challenges in accessing infant formula and opportunities to prepare it hygienically, and many parents diluted formula in order to extend its use.

UNICEF, a United Nations agency that focuses on protecting children and their families during crises, has appealed for $949 million to reach 2.8 million children in Ukraine. According to the organization, this will be used to provide life-saving services, including support for breastfeeding and other forms of nutrition.

The largest chunk of the budget, 44 percent, will be allocated to social protection in the form of cash transfers to 265,000 households with children. Households are eligible if they have at least three children, including one under the age of two, or alternatively, if they have at least two children, including one with a disability. This intervention will help families afford necessities such as food for children six months to two-years-old. During this age span, children are going through a critical period of growth and development that has an impact on the rest of their lives.

In March of this year, UNICEF, the United Nations High Commissioner for Refugees, the Global Nutrition Cluster, the Infant Feeding in Emergencies (IFE) Core Group, and other partners released a joint statement on protecting maternal and child nutrition for those affected by the war in Ukraine and the refugee crisis it has created. It is an urgent call for all involved in the Ukraine response "to protect, promote, and support the feeding and care of infants and young children and their mothers as well as pregnant women."

Breastfeeding During Conflict and Crisis

The first consideration in the joint statement is to support parents as they start and continue to breastfeed during crisis. This entails beginning breastfeeding right after birth, even in emergencies. It can be boosted with approaches such as Kangaroo Mother Care for high-risk newborns, which involves skin-to-skin contact with parents, continually keeping their infants close to them. It calls for access to organizations and specialists for consultation and guidance and direct breastfeeding support in an emergency context.

Switching to formula is common during crisis, as seen in the 2015 Ukraine crisis and other conflict settings, including Iraq. Forty-six percent of internally displaced parents stopped breastfeeding infants under six months of age during the 2015 Ukraine crisis, and when it was possible, they accessed infant formula through humanitarian assistance packages.

Ukrainian parents who changed from breastmilk to formula during the 2015 crisis reported that they had the perception that breastmilk production declined, which was attributed to stress. Stress interferes with the release of oxytocin which may temporarily cause problems with breastfeeding, with less milk produced at each feeding if it happens repeatedly. But milk production is unlikely to stop altogether.

If parents do halt breastfeeding, relactation—restarting breastfeeding after a gap—can be difficult but it is possible. And if parents are sick, they generally still can breastfeed, and often they pass on antibodies through their breastmilk to protect their infants. Wet nursing, which is breastfeeding by a parent who is not the child's biological parent, may also be an option. If parents are unable to resume breastfeeding, for children from 0 to 6 months, they can use the liquid ready-to-use formula or dry formula, according to UNICEF, with preference given to the liquid formula because it does not rely on additional water.

Breastfeeding counseling and messaging have been effective in other emergency situations, helping parents continue breastfeeding if they are able. Some lactation consultants are currently working in Ukraine to give direct support to parents.

An important lesson learned from the 2015 Ukraine crisis is that there also needs to be a solid plan and system in place during emergencies for infants who use baby formula, especially in Ukraine and other countries where the majority of infants are formula fed.

One of the actions in the joint statement is to provide supplies for the hygienic preparation and storage of breastmilk substitutes for infants. These supplies should be given along with training of caregivers on how to safely use baby formula, and consistent follow-up support should be provided at designated sites.

Infant formula can become contaminated easily by bacteria if it is left open or prepared with unclean water, heightening infection and diarrhea risk. So a clean water source is critical. In Yogyakarta, Indonesia, for example, after the 2006 earthquake, researchers reported a link between diarrhea incidence and babies who had consumed unsolicited donated formula.

In Ukraine, water infrastructure has been damaged, especially in the eastern part of the country. According to UNICEF, the lead for the Global WASH Cluster, there are 1.4 million people in Ukraine who did not have safe access to running water as of April 2022. Based on data from 16 humanitarian crises between 2014 and 2016, UNICEF estimated that children under five years old are 20 times more likely to die from diarrhea caused by unsafe water, sanitation, and hygiene than from violent conflict.

Unsolicited and unregulated donations and distribution of formula and other milk products, bottles, and feeding equipment pose another threat to children's health. A major concern is violations of the International Code of Marketing of Breastmilk Substitutes, known as the WHO Code for short. Ukraine incorporated the WHO Code into national legislation last year, forty years after its inception, but the IFE Core Group says it has not been adequately implemented or enforced.

Breaches of the WHO Code were reported during the 2015 Ukraine Crisis. For example, breastmilk substitutes were given with food baskets without restrictions for children across age groups. Parents reported that medical professionals sometimes recommended giving formula, or even water, to young infants at birth clinics out of concern they would go hungry. The joint statement outlines that formula and relevant supplies should ideally be procured and provided by UNICEF or partners who comply with the WHO Code (or that can be purchased by parents directly if available with the appropriate specifications).

Infants older than six months but under two years can receive specific types of milk, such as full cream animal milk, if necessary, which needs to be pasteurized or boiled and cooled if infants are under the age of one. Feeding vessels such as cups must be sterilized, which of course, is a significant challenge in emergency conditions.

Safe and appropriate nutrition options for infants and children in emergencies help to ensure their health. Context matters. As numbers of formula-fed babies may increase during crisis situations like the one in Ukraine, it's important that humanitarian and other groups support breastfed and non-breastfed babies and parents equally.

Disclaimer: Allison Daniel is a consultant for the World Health Organization, specifically involved in the guideline on prevention and treatment of wasting. The views in this article do not necessarily reflect those of the organization.