Go to homepage
Antibiotic Resistance is a Smoldering Crisis
Governance 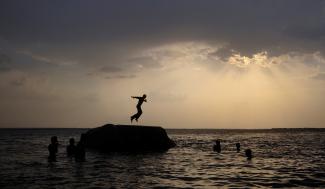 A boy prepares to jump off a rock into the waters of the Osman Sagar Lake near the southern Indian city of Hyderabad, on May 29, 2011. REUTERS/Krishnendu Halder/File Photo
by Kevin Ikuta, Lucien Swetschinski, Mohsen Naghavi, Chieh Han, Katherine Leach-Kemon January 20, 2022

While COVID-19 is a fast-moving crisis that is exploiting countries' vulnerabilities, there is another health crisis that has been smoldering for decades, wreaking havoc on the world—resistance to antibiotics. These medicines have been increasingly losing their potency due to overuse. Illnesses that used to be largely curable, such as tuberculosis, blood infections, and pneumonia, have become fatal. In the most dire projections, medicine as we know it could become a distant memory as our ability to perform surgery, give chemotherapy, and ensure safe hospital stays is compromised by infections that can no longer be treated or prevented by antibiotics.

This study leverages hospital and laboratory data from around the world as well as data from published studies. Members of the Institute for Health Metrics and Evaluation-led Global Burden of Disease Network, which includes more than 7,000 collaborators in 157 countries and territories, collaborated on the study and provided data.

Where Antibiotic Resistance Is Deadliest

The different factors that drive resistance to antibiotics are complex and can vary from location to location. For example, in high-income countries,  overuse of antibiotics has contributed to much of the resistance. In contrast, in areas of sub-Saharan Africa, the rate of antibiotic use is substantially lower and resistance is driven, at least in part, by a lack of access to clean water and sanitation.  To tackle antibiotic resistance, approaches tailored to each location are vital.

Stifling the Threat of Antibiotic Resistance

There are a variety of proven interventions that leaders can use to curb this growing threat to people's health. For example, developing new vaccines to prevent common infections drives down the need for antibiotics, which in turn reduces antibiotic resistance. Of the six major infections that account for the bulk of the lives lost to antibiotic resistance, there is only one vaccine that exists today—the pneumococcal vaccine for Streptococcus pneumoniae (a bacteria that causes pneumonia and meningitis). But new vaccine programs are underway for Staphylococcus aureus (staph), Escherichia coli (E. Coli), and other infections that contribute to much of the disease burden. Greater investment and urgency is needed, however, and even a fraction of the success we witnessed in the development of COVID-19 vaccines could prove lifesaving.

Overcoming challenges to get vaccines into arms is equally important—another lesson learned from efforts to vaccinate the world against COVID-19. Investments in boosting health systems' capacity to deliver vaccines and ensuring ample, predictable, and reliable supplies of vaccines are also critical. In addition to developing and delivering new vaccines, the world needs to bolster the pipeline for new antibiotics, and make sure second-line antibiotics are accessible to anyone who needs them. Funding for these efforts has been minimal, and most of the major pharmaceutical companies have stopped investing in research and development for antibiotics due to lack of profitability.

Deaths per 100,000 Attributable to Antibiotic Resistance by Region, in 2019

While the drug development pipeline is a critical component to combatting resistance, it would be only a matter of time before resistance develops to any new drugs without investment in programs to optimize their use and slow the spread of resistance. These include programs that improve access to clean water, sanitation, and hygiene, as well as infection prevention and control programs in health facilities. For instance, in health facilities, installing hand sanitizer dispensers next to each hospital bed can reduce the likelihood of antibiotic-resistant infections spreading from person to person. And in communities, especially in settings without widespread access to safe water and sanitation facilities, expanding access decreases infections, lowering the need for antibiotics.

The Right Antibiotic for the Right Infection

Optimizing antibiotic use plays a large role in combatting resistance, too. Antibiotics are vital to curing many bacterial infections, and it’s essential that effective antibiotics are available when needed, but the right antibiotic needs to be used for the right infection. In a similar vein, when the culprit is a virus instead of a bacteria, antibiotics are not useful. Appropriate prescribing can only be achieved if health care providers are able to run tests to accurately diagnose and treat these conditions. So, having testing equipment and laboratory infrastructure is key. Unfortunately, accessing these essential tools is a challenge in many low-resource settings.

Curbing the routine use of antibiotics in livestock may also be an effective strategy to combat antibiotic resistance, research shows. Antibiotics are used to enhance production of meat in many countries because they can increase growth, protect against disease, and lower costs. Antibiotic resistance evolves slowly, and its insidious spread can lead to complacency even though resistance could ultimately end up killing even more people than this pandemic has to date. Like COVID-19, antibiotic resistance knows no borders, and the global spread of highly antibiotic-resistant bacteria has been well documented. If we internalize lessons from what has gone wrong with COVID-19, addressing this crisis as a global community before it’s too late, we will benefit all.

ACKNOWLEDGEMENTS: The authors would like to thank Rebecca Sirull for fact-checking assistance, Eve Wool for logistical support, and Catherine Bisignano and Connie Kim for providing feedback.

Kevin Ikuta, MD, MPH, is an infectious diseases physician and public health researcher at UCLA. Dr Ikuta serves as the director of infection prevention and control at the Greater Los Angeles Veterans Affairs Hospital where much of his focus is on preventing the spread of antimicrobial resistant pathogens across the hospital system.


Lucien Swetschinski, MSc, is a researcher and statistician who has worked on the Institute for Health Metrics and Evaluation’s Antimicrobial Resistance (AMR) team since August 2020.


Mohsen Naghavi, MD, PhD, MPH, is a Professor of Health Metrics Sciences and Director of Subnational Burden of Disease Estimation at the Institute for Health Metrics and Evaluation (IHME) at the University of Washington.


Chieh Han is a data analyst at the University of Washington's Institute for Health Metrics and Evaluation (IHME).