What’s to Blame for Dengue’s Rise? It’s not Only Climate Change
Urbanization

What’s to Blame for Dengue’s Rise? It’s not Only Climate Change 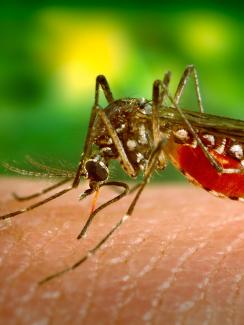 New cases of dengue, also known as breakbone fever, are on the rise around the world according to research from scientists at the University of Oxford, the London School of Hygiene & Tropical Medicine, the Institute for Health Metrics and Evaluation at the University of Washington, and elsewhere. The dengue virus is transmitted by the mosquito Aedes aegypti, which can also spread yellow fever, chikungunya, Mayaro, and Zika. Symptoms of dengue include severe headaches, intense muscle pain, shock, and even death.

Out of all the illnesses transmitted by insects, dengue causes the greatest disease burden worldwide, leading to 10,000 deaths and 100 million infections per year in more than 125 countries. There is still no effective vaccine for dengue. In 2015, 4 billion people—approximately half of the globe—were at risk for dengue infection. By 2080, that number is projected to increase to 6 billion.

‘The risk of dengue is predicted to increase the most in Africa, particularly southern Africa and the Sahel’

Currently, dengue hotspots include urban areas in the tropics and subtropics. As climates warm, however, many large cities on the eastern coasts of China and Japan are likely to be at risk for dengue by 2050. In the United States, the risk of dengue is projected to expand across the southeastern part of the country. The risk of dengue is predicted to increase the most in Africa, particularly southern Africa and the Sahel in West Africa, as temperatures rise and rainfall increases, making the environment more hospitable to mosquitoes. However, dengue risk will decrease in some parts of Africa as they become too hot and dry for mosquitoes to survive. Areas previously untouched by dengue in Mexico, Argentina, and Australia could experience increased risk of the virus.

Climate change is not the only factor in dengue’s rise, however. All the attention on the relationship between climate change and dengue obscures other factors that are even more important: population growth and urbanization. These two factors are expected to play major roles in fueling increased risk of dengue in places such as Asia, Africa, and the Americas. The risk of dengue will probably grow fastest in places where the virus is already well-established, especially in economically-disadvantaged areas where health system infrastructure and resources are stretched thin.

As more and more people face the risk of contracting dengue, governments will need additional resources from donors to control mosquito populations, prevent and treat the disease, and respond to outbreaks. Investment in existing mosquito control technology will be vital, including spraying insecticides, providing insecticide-treated nets, eliminating standing water, and introducing mosquito predators. Also, a number of emerging technologies could have a profound impact on dengue. One potentially game-changing innovation is insect sterilization. Another advancement is a technique that introduces Wolbachia bacteria into mosquito populations, reducing the mosquitoes’ ability to transmit dengue virus to humans. Finally, recent advances in dengue vaccine technology hold great promise to protect billions from this disease, but a 2016 dengue vaccine trial in the Philippines stirred controversy when it was halted due to safety concerns.

EDITOR'S NOTE: The authors are employed by the University of Washington’s Institute for Health Metrics and Evaluation (IHME), which leads the Global Burden of Disease Study. IHME collaborates with the Council on Foreign Relations on Think Global Health. All statements and views expressed in this article are solely those of the individual authors and are not necessarily shared by their institution.


Lucas Earl is the GIS Specialist at the University of Washington's Institute for Health Metrics and Evaluation (IHME).

An interview with Matt Leacock, creator of the popular 10-year-old board game, on the art of designing cooperative play