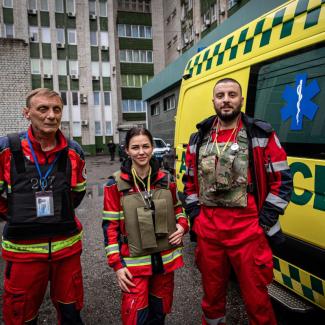 Health workers pose beside their ambulance at a hospital in Kharkiv, where they have been working despite constant shelling from Russian troops encircling the city on April 20, 2022. Alex Chan Tsz Yuk/SOPA Images/LightRocket via Getty Images
by Lillian Posner September 15, 2022

Ukraine's armed forces have recently liberated around 2,000 square miles in the Kherson and Kharkiv regions, along with important cities like Izyum and Kupiansk. With the battlefield success comes an opportunity to take stock of the damage, provide medical attention to those who were living under occupation, and Since February 24, the World Health Organization has confirmed 505 attacks on health-care facilities in Ukraine. More than seven million people have taken refuge in other countries, and millions more have been displaced internally.

To better understand how the war has reshaped health care in Ukraine, we spoke with Pavlo Kovtoniuk, co-founder of the Ukrainian Healthcare Center, an independent health policy think tank in Kyiv, and former Deputy Minister of Health of Ukraine. We asked him about the challenges facing Ukraine's health-care system after seven months of war and what can be done to make it more resilient, both in the immediate future and the long term.

Think Global Health: Earlier in the war, there was a lot of concern about Russia's targeted attacks on hospitals and civilian infrastructure. Is that still going on?

Pavlo Kovtoniuk: There is much, much less than in the beginning. And that's the result of the changing nature of the war itself. The war is now more limited territorially and it is more restricted to military versus military action, rather than Russia targeting civilian infrastructure as a means of advancement. Earlier in the war, indiscriminate shelling of everything was common, and that's when most of the war crimes were committed. Now, hospitals are only at risk in a couple of places like Kharkiv, Mykolaiv, and some cities in the Donetsk region, like Kramatorsk. In those places, some civilian infrastructure is hit from time to time, but the intensity is much, much lower than before.

Think Global Health: In the wake of all the displacement of people and destruction of health infrastructure, what are the most pressing health concerns Ukrainians face right now?

Pavlo Kovtoniuk: The most serious problems with health needs in Ukraine aren't that obvious. They're not even related to the military action zones, but to the economic situation in the country. As many as four million people have returned to Ukraine from the European Union–something you can actually observe in Kyiv. When September came, all the kids went back to school. The city is again overcrowded with traffic jams. So, what is most risky about health care is the economic situation, which is really dire, and inflation is skyrocketing. It is 23.8 percent and is expected to reach 30 percent next year, and unemployment will be about 30 percent. The depreciation of local currency will be huge, and the cost of drugs will skyrocket.

In Ukraine, most drugs are purchased out-of-pocket directly. The Ukrainian government does provide some, but most of those are very expensive drugs—for cancer treatment, rare diseases, or for serious chronic diseases. So, the poverty rate will likely grow, incomes will shrink, and at the same time, the cost of health care, and especially pharmaceuticals will just skyrocket. That poses a threat that isn't as spectacular as hospital attacks, but is in some ways more serious, because it will create a lot of insecurity and undermine Ukraine's ability to wage war, especially one that becomes protracted.

In terms of destroyed hospitals, the situation is getting better. In places where the destruction was really serious, for example, Chernihiv, in northeast Ukraine, was very heavily affected by bombardments. But then health care reshuffled and consolidated into larger hospitals, which is much more efficient. In Ukraine, traditionally health care was very fragmented with too many hospitals, many of which were underutilized. Economically, it's very hard to sustain that, which is consolidating is actually the way to survive and to be resilient during these economic hardships.

As we look toward 2023, it’s important to concentrate on people and their social security, to which health expenses can be a huge threat

Think Global Health: Ukraine has plans to roll out a digital platform that people can use to access health services. Are digital solutions a part of this effort to consolidate health resources?

Pavlo Kovtoniuk: In the beginning of the war digital health services were very important because the war displaced many patients and health professionals, but they continued to provide care anyway, using messaging apps or videoconferencing. That hasn't yet grown into a systemic government service in which providers can be reimbursed or that includes official medical records, but some services are continuing to be provided electronically, especially in places closer to the frontline where there are shortages of medical professionals. But doctors have been using digital technology to see patients with chronic conditions, to supervise the intake of certain drugs, or to consult patients who are if forced to change prescriptions because they couldn't access their usual medication.

It was a surprise how doctors were willing to use those methods to continue communicating with patients. There were even doctors who spread the word about their services themselves. Some started to specialize in consulting internally displaced patients online. Pediatricians reached out to communities of moms with kids, so they would know the names of doctors who they could approach via WhatsApp or show their kids through the screen and get an immediate consultation. It was kind of a phenomenon, but they're still working on translating that into a policy.

Think Global Health: What can Ukraine's international partners do to support the Ukrainian health system?

Pavlo Kovtoniuk: The most urgent task for Ukraine for the next year is to maintain its health services at least at the prewar level in an environment of highly harsh economic conditions. The best help Ukraine's partners can provide is to support service provision where the Ukrainian system might fall short. That is, primarily, the provision of pharmaceuticals and medicines, especially in hospitals. Filling hospitals with new equipment or rebuilding damaged ones are not the most urgent tasks in the next year, although donating equipment tends to be the number one choice for many donors.

More helpful assistance would come in the form of direct budgetary support, like that organized by the United States and the World Bank. But NGOs and charities can also help cover the cost of expensive drugs or assist chronic patients with their recurrent needs rather than providing hospitals with equipment. As we look toward 2023, it is more important to concentrate on people and their social security, to which health expenses can be a huge threat.

Think Global Health: What is the outlook for mental health?

Pavlo Kovtoniuk: There is enormous pent-up demand for mental help that could overwhelm the health system like a tsunami after the war ends. Almost every Ukrainian went through a psychological trauma earlier this year, and millions will have trouble coping with it in the long term. Right now, the mental state of most people can be described as war mobilization or a state of shock in which they are unaware of their psychological needs. However, as the battlefield situation improves and people get some relief, mental health problems will emerge.

The health-care system, which was never high-performing in the mental health sphere, is simply not ready for an epidemic of mental health needs.

However, the issue should be addressed. If people don't articulate their mental health problems, it doesn't mean they don't have them. Right now, Ukraine needs assistance in training primary care practitioners and deploying mental health workforce to diagnose and take care of the wave of mental health issues as soon as in 2023-2024.

Pharmaceutical expenditures account for as much as 70 percent of money Ukrainians spend on health care, not services

Think Global Health: Are there policies that you would like to see the Ukrainian government adopt that would streamline the process of strengthening the health-care system?

Pavlo Kovtoniuk: The government will face tremendous challenges in the next year. The economic and humanitarian components of warfare are equally important as the military components. The government is tasked with the tremendous challenge of not only maintaining its policies, but also implementing modernization and reform connected with European Union (EU) integration. Because, for Ukraine, the ultimate way out of this war is to be to be integrated into the EU and NATO. Otherwise, the war with Russia will just start again a few years later.

What I would love to see from the government for the next year, is tackling the issue of pharmaceuticals. Drug purchases have historically driven the bulk of the catastrophic health spending and financial insecurity related to health in Ukraine. As much as 70 percent of money people were forced to spend on health care was for drugs, not services. Because most of the drugs are imported and even those that are not imported are produced from the imported material, the prices will soon shoot up. That could mean financial hardship for many families who have people with chronic conditions or newly diagnosed serious diseases which require expensive medicines. Or even worse, if they can't afford treatment, they may avoid seeking health care at all, or delay getting care so that when they do seek treatment, it will require even more expenses to treat them in an emergency setting. That means the government should find a way, although their budgets will be cut across all sectors, to increase pharmaceutical spending. If it keeps funding at the level of the previous year, inflation will consume 30 percent.

It seems counterintuitive to increase funding to these programs, when Ukraine's GDP declined 30 percent this year. But it's crucial to keep people living their lives normally. Reform is not easy, but for Ukrainians it is a matter of survival. If the government doesn't reform all the systems in Ukraine, it will have no chance of getting into the EU. And it's not a matter of just building back to the pre-war situation but improving on what it had before.