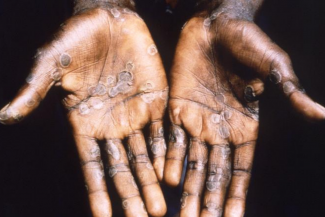 The palms of a person with monkeypox, a rash that is strikingly similar to a smallpox rash. CDC/ Brian W.J. Mahy
by Mary Brophy Marcus August 5, 2021

This week, the Centers for Disease Control and Prevention (CDC) announced that there are no new monkeypox cases in the United States after an individual in Texas came down with the virus in July upon return from Lagos, Nigeria.

There was concern of spread in the United States because the patient had been in casual contact with hundreds of other people while traveling, and in close contact with family members once home in Texas.

“The patient, a resident of Texas, traveled to Lagos, Nigeria, and returned back home to Texas on July 9. He had two flights, one from Lagos to Atlanta on the eighth and then from Atlanta to Dallas on the ninth,” said the CDC’s Andrea McCollum, Poxvirus Epidemiology Unit Lead.

Once home, signs and symptoms progressed. Patients typically start out with a fever accompanied by swollen lymph nodes.

“Respiratory symptoms and really substantial fatigue occur for several days prior to the development of a rash we call disseminated rash. It appears on most parts of the body, but eventually on the palms and the soles of the feet. This rash does tend to be quite characteristic," McCollum said.

The patient headed to an emergency department in Dallas on July 13, then was placed in isolation for medical care and to reduce the risk of spread. Lab tests on July 15 confirmed monkeypox.

The first human case of monkeypox—a rare zoonotic virus that can transmit from animals to people—was recorded in the Democratic Republic of Congo in 1970. Since then, cases in people have been reported in other central and western African countries including Cameroon, Central African Republic, Congo, Cote d'Ivoire, Gabon, Liberia, Sierra Leone, and South Sudan. In 2003, the United States recorded 47 cases across five states. There have also been cases reported in the United Kingdom, Israel, and Singapore in people who had been in Nigeria.

There has been a lot of support in the United States since the 2003 outbreak, McCollum said, including extensive training among health-care workers to recognize cases and isolate them swiftly to prevent spread. In the recent case, U.S. state and national health officials reached out to more than 200 people in 25 states who may have had contact with the Texas patient. Other countries’ ministries of health were also contacted, McCollum said. If a U.S. exposure was determined, each state health department asked those patients to report back daily for a total of 21 days on certain signs and symptoms.

While the case in the United States appears to be coming to a safe close, it calls attention to the virus’ ongoing transmission in Nigeria and elsewhere in Central and West Africa, and it’s potential to spread globally, says McCollum.

Monkeypox virus is one viral species and there are two distinct strains: West African and Congo Basin. The virus is endemic in West and Central Africa.

“The West African strain tends to be less pathogenic and less transmissible human-to-human, but in Nigeria, there have been deaths in individuals who are severely immunosuppressed,” McCollum said.

The fatality rate in Nigeria is around 3 percent (in lab-confirmed cases).

The Texas monkeypox case is coming to a safe close, but it calls attention to the virus’ ongoing transmission in Nigeria and elsewhere in Africa

The Congo Basin strain has an approximately 11 percent fatality rate in those without prior smallpox vaccination, which can prevent infection and/or severe illness. Those most at risk for contracting it are very close contacts, such as family members and health-care workers—people who have had close, sustained contact and have been exposed through respiratory droplets and bodily fluids, or direct contact with the pox lesions.

“The lesions have live virus. This rash is considered to be infectious until the crust separates and a fresh layer of skin forms,” says McCollum, who pointed out that this is the seventh instance where a traveler has been to West Africa—specifically Nigeria—and then gone on to another country and presented with signs of illness.

“In every one of these cases, to my understanding, they’ve been very quickly identified by a physician or local health authorities and preventions have been put in place so they can receive the medical care they need and public health efforts can happen,” says McCollum, who has collaborated with colleagues in the Democratic Republic of Congo.

“This really requires close coordination not just here with the CDC and with our state departments of health, but also we need a close connection and contact with our international colleagues. Certainly, with our CDC office in Nigeria, but also Nigeria Centre for Disease Control and Prevention so we are sharing information to aid their investigation on the ground,” she says.

“I can tell you we definitely think there were a couple measures put in place on those flights due to COVID-19 that probably helped limit exposures to monkeypox, including wearing masks when not eating on the flights,” McCollum said.