The new administration should adopt a new approach to global health, characterized by solidarity rather than leadership 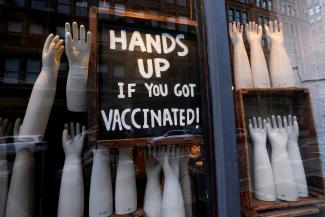 A sign in a store reads "Hands up if you got vaccinated" amid the coronavirus disease pandemic in the Manhattan, New York on January 27, 2021. REUTERS/Carlo Allegri
by Matthew M. Kavanagh, Ngozi Erondu, Mara Pillinger February 5, 2021

Among the urgent, unenviable challenges facing the Biden-Harris administration is the imperative to reset global health policy for the era of COVID-19. After the damage inflicted by the Trump administration, the new administration should be applauded for rapidly rejoining the World Health Organization, removing the global gag rule, joining COVAX, and putting forward a globally-engaged COVID-19 strategy. The world has noticed.

The new administration also clearly understands that reverting back to the 2016-era strategy is not a viable option: in geopolitics and public health, too much has changed. Instead, the new moment calls for a new approach—one rooted more in solidarity than in leadership, and that tackles head-on the destabilizing inequalities wrought by infectious disease and climate change.

The Biden-Harris administration must begin by defining its vision of global health security. One often dominant vision focuses primarily on keeping new diseases of the world away from the U.S. population. A different vision, rooted in solidarity, focuses health security on strengthening collective institutions to respond to shared threats. That includes infectious diseases that afflict people in low- and middle-income countries even when they do not present an immediate threat to most of the U.S. population.

In 2021 and the aftermath of COVID-19, there will be pressure to "securitize" global health and aid. For example, when the new administration announced it would add USAID to the National Security Council, some observers expressed concern this could lead to increased security components in USAID projects and deepen the inclination to frame all things global as questions of security. But Ambassador Samantha Power could help build a different paradigm—re-thinking security instead of securitizing aid.

In practice, the administration can start by looking to experts leading successful public health efforts in Africa, Asia, and Latin America. They have shown that tackling ongoing outbreaks is often the best preparation for outbreaks to come. Many countries have responded effectively to COVID-19 by drawing on experiences and capacities built up addressing AIDS, tuberculosis (TB), malaria, polio, and other issues—from trained health workers, to capable contact-tracing and field epidemiology, to cutting edge laboratories. Often these capacities were built with U.S. support through PEPFAR, the Global Polio Eradication Initiative, and other U.S. funded mechanisms.

A central part of the U.S. COVID-19 response should be injecting new funds to these pandemic-fighting efforts, which have struggled with stagnant budgets and are often treated as oddly distinct from global health security. For example, the Global Fund to Fight AIDS, TB, and Malaria has proven it can act effectively even when other global structures have faltered by rapidly allocating $1 billion to fight COVID-19 through government and community capacities. But now, a second wave of COVID-19 is hitting African countries and could lead to a million additional deaths from AIDS, TB and malaria. But the Global Fund is essentially out of money. Coronavirus relief should include funding for the Global Fund, PEPFAR, and other global health, as the bill that passed the House did last year.

Connect Responses to the Pandemic and Climate Change

Climate change and outbreak response are inextricably linked, but you would not know that from most countries' global health policies. The expanding geographic range of mosquitos could put more than a billion people at new risk of disease, while flooding and ever more powerful storms drive outbreaks of diseases like cholera. Yet the field of global health has largely failed to robustly address climate change, and climate policy largely ignores climate-driven infectious disease. The Lancet reported that health authorities in half of low-income and lower-middle-income countries have no access to any funds to support health-sector adaptation. The Green Climate Fund, created to assist low- and middle-income countries to adapt to and mitigate climate change, has not funded a single health sector project for ten years running.

The Biden-Harris administration has pledged a just and integrated climate response. This requires tackling diseases that will disproportionately affect poor communities. USAID and the CDC should collaborate in building early warning systems in low- and middle-income countries, and outbreak-response capacity in those communities most likely to see climate-driven epidemics.

The COVID-19 pandemic also shows global health is not just a "development" issue. Taking a solidarity approach, the United States should aim for a two-way relationship to learn lessons for domestic public health  from expertise in low- and middle-income countries, while also funding high-impact programs there. The Biden-Harris administration must strengthen and prioritize USAID, but avoid centralizing all global health efforts in that single agency. Some have advocated shifting PEPFAR from the State Department to USAID. This would be a move in the wrong direction: PEPFAR has succeeded by addressing HIV as a challenge to development, science, health, security, and diplomacy. Its cross-governmental approach has spurred inter-agency arguments but also driven success. A broader pandemics initiative that bridges the White House and the departments of Health and Human Services, State, and USAID is an obvious way forward—learning from what has worked in recent years, and what has not.

A whole-of-government approach will help connect the fight against today's killers to security exercises like a Joint External Evaluation or pandemic simulation. CDC led the way in developing, strengthening, and implementing the Global Health Security Agenda, which can be better connected to today's killers. Pandemics start as a public health problem but grow to impact nearly every aspect of society. Incorporating civil society organizations, military, and the private sector (both locally and globally) in broader ways can build social capacity to respond to pandemics around the world.

Getting COVID-19 Vaccines to the World

By sending Anthony Fauci to the WHO's board meeting even as the U.S. inauguration took place, the Biden-Harris administration wasted no time re-embracing multilateralism. The administration is also joining COVAX, an urgent global initiative that still faces a $4.6 billion funding gap to buy COVID vaccines.

But the Biden-Harris administration can and should be bolder. While some wealthy countries may vaccinate 80 percent of their populations this year, even with support of COVAX, much of the world will not exceed 20 percent. Some countries will not widely vaccinate their populations until 2023. Not only is this a dereliction of ethical responsibility by wealthier countries, it will prolong the pandemic and global vulnerability, foster the emergence of new variants, and impose an estimated $9 trillion of global economic losses.

The biggest barrier is artificially constrained production. There's an opportunity to significantly increase the number of factories around the world making the new inoculations—including vaccines developed largely with U.S. public funding like the NIH-Moderna vaccine. The new mRNA vaccines are highly effective and comparatively simple to produce, but doing so requires access to the intellectual property behind them and a transfer of specialized technology to make them. The United States should prioritize helping governments, multilateral organizations, and companies in Africa, Asia, and Latin America to rapidly stand up such production. Acting on a proposal from Costa Rica, the World Health Organization launched a mechanism for sharing intellectual property and transferring technology that could be a piece of this puzzle. The United States can support building production hubs, for example by partnering with the African Union. Russia is already licensing its Sputnik V vaccine, which new peer-reviewed data shows to be effective. The new Biden-Harris administration can chart a new course by dropping the Trump administration's insistence on rigid enforcement of intellectual property rights and global monopolies by a few companies and instead use its legal authorities to open vaccine technology for global use. The United States should also support a proposal by South Africa and India to waive WTO intellectual property protections for COVID-19 products. Generic production was what made affordable AIDS drugs possible, and how the United States ensured access to anthrax drugs in 2001. Now is the moment to crowd in every producer we can.

Beyond COVID-19, the United States should re-think vulnerability and interdependence in the post-COVID-19 era, which will require new forms of engagement with middle-income countries. Middle-income countries like Brazil, Ghana, and India, are hubs of travel and economic activity, but growing GDPs can mask stretched resources, vast inequalities, and complex political environments that undercut response to disease outbreaks. For example, the HIV pandemic is shifting increasingly to middle-income countries. BRICS (Brazil, Russia, India, China, South Africa) countries now account for a third of all new HIV infections, and upper middle-income Jamaica has a higher HIV mortality rate than does low-income Haiti. Measles deaths have increased 50 percent globally since 2016 and reemerged in South American Indigenous population due to under-immunization in some regions and increased vaccine skepticism in others.

Yet these middle-income countries—home to 75 percent of the world's population and 62 percent of the world's poor—have seen global health programs disengage. The Trump administration's emphasis on "self-reliance" at times obscured the degree to which big problems cross boundaries and that countries' wellbeing are inter-related. The Biden-Harris administration should ramp up bilateral and multilateral investments to stop diseases in middle-income countries, including those in the Western Hemisphere. This does not mean abandoning efforts in low-income countries; it means expanding the pie.

Global Health For The Coming Decade

The Biden-Harris administration has taken office in a world increasingly wary of U.S. power, and with good reason. Meanwhile, there are increasing calls to "decolonize" global health by moving towards an inclusive, just, and diverse global health architecture. The new administration must rebuff and rectify past administrations' funding faux pas, such as funding Western institutional consortia to "support" poor countries while disregarding local institutions that have been effective at doing their own work. This is not a problem but an opportunity: at this critical juncture, solidarity can be a more effective posture than leadership. It recognizes the comparative power and wealth the United States continues to wield, but mobilizes to stand alongside public health leaders throughout the world. Acting quickly on funding and policy, addressing inequality and the climate crisis, and breaking new ground with a whole-of-government approach to pandemics could re-position U.S. global health strategy for the decade to come.


Mara Pillinger, PhD is an associate at the Georgetown University O’Neill Institute for National and Global Health Law.