The field has come a long way from its colonial past, but global health still falls short of being diverse and inclusive 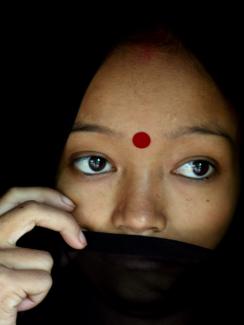 A woman living with HIV/AIDS stands in her hut in the northeastern Indian city of Siliguri on July 23, 2005. REUTERS/Rupak De Chowdhuri
by Katri Bertram, Ngozi Erondu, Madhukar Pai June 3, 2020

Over the past five years, many people working in global health have tried to ensure that the field becomes more inclusive and diverse. Historically, global health has been mainly a top-down, North-to-South enterprise led primarily by white, elite men. What we are now seeing is an attempt to ensure that people and communities previously underrepresented in agenda-setting, discussions, and decisions have a voice at the table, are present at meetings, and can determine what is needed in their specific contexts.

There are plenty of examples of such movements

For instance, there are many women’s movements that are advocating for the inclusion of women into global health decision-making, also in leadership roles. One such example is Women in Global Health, a global movement with national chapters that aims to achieve gender equality in global health leadership. WomenLift Health helps elevate exceptional women to become health leaders. Global Health 50/50 works to advance gender equality in global health.

Some movements advocate for what they call the "decolonization of global health," which aims to ensure that the global South is represented across all areas of global health.  Several universities in the global North at established schools of public health like Duke University and University of Edinburgh have held ‘decolonize global health’ conferences and workshops to explore the power and equity in research partnerships between researchers in countries in Europe and the United States and emerging researchers at institutions in countries throughout sub-Saharan Africa and Southeast Asia.

There are also civil society movements, which aim to ensure that patient advocates and civil society are given a seat in global health decision-making bodies. For example, WHO has revised its engagement with non-state actors, and both Gavi, the Vaccine Alliance, and Global Fund have reconfigured CSO and community representation on their respective boards. Public-private partnerships like the Coalition for Epidemic Preparedness Innovations (CEPI) have started to lead research and policy in prioritizing vaccines for diseases that have been overlooked but disproportionately affect poor communities. Smaller organizations within countries gain power in influencing refugee health and advocacy for transparency in how donor funding is spent.

What unites these movements is their aim to tackle power structures in global health that favor those who have traditionally held decision-making roles due to their gender, nationality, physical location, ability to fund, type of organizations they lead, or any other reason. Many of these movements aim to defend and advocate for the rights of underrepresented populations.

Defend and advocate for the rights of underrepresented populations

Not surprisingly, power structures take time to change. While global health has come a long way from its colonial past, it is still neither global nor diverse. Global health organizations, for example, are still primarily located in the global North, are mostly run by leaders who come from high-income countries, and have taken a long time to accept civil society or patient community representation on their boards. Even when organizations do have such representation, most of those appointed still do not hold decision-making powers. Women as well as experts from low- and middle-income countries are still strongly underrepresented in global health leadership positions across health sectors. Researchers, funders and universities from high-income countries continue to dominate global health research.

Universities and research institutions are still not sufficiently mentoring or supporting women or people from the global South by enabling them to set curricula or move into leadership roles. Despite some laudable efforts to ensure more diversity on global health panels, those who were previously underrepresented at conferences frequently remain so, perpetuating the cycle of underrepresentation and lack of diversity at all levels of global health. In addition, the motivation for diversity is often a fear of backlash, rather than genuine support for its importance or an actual interest in diverse perspectives.

Who Speaks for Whom About What

However, there has also been criticism and heated debate within various movements for inclusion on who should represent the underrepresented.

The motivation for diversity is often a fear of backlash, rather than genuine support

Civil society, women’s movements, and decolonization movements are not homogeneous bodies with one representation, identity, or objective. For example, within civil society there has been a longstanding debate on whether international non-governmental organizations (NGOs) should be allowed to hold civil society seats in conferences or on boards. International NGOs tend to be well-financed, have strong access to policy makers, are heavily dominated by staff and leadership from the global North, and might not be close to the ground. Patient movements and small, local NGOs, feel that international NGOs represent donors more than civil society.

In the decolonization movement, there has been a recent discussion on who is allowed to lead decolonization discussions (current efforts are largely by students in high-income countries), and whether the word decolonization itself reinforces colonial thinking. In women’s movements (which are mostly led by educated, white women in high-income countries), sub-movements advocating for the rights of women of color from the global South, or non-binary gender identities, have questioned whether they are well represented by others who do not share their identities or specific interests.

Very practically, there is always someone who will be less privileged or will be underrepresented, because identities and socio-economic contexts are complex. Just as a woman can also be from the global South and from civil society, a woman from the global South from civil society may have been raised in New York, networked with the global elite since childhood, gone to Ivy League universities, and have ample wealth to draw from. Does this woman represent the same role as someone who was never able to finish primary school, who grew up in a village, and has founded a community-based movement? In the same vein, if a global health agency is led by a person of color, but that person was educated in the Global North and lives in a high-income country, are they truly representing people of color from the Global South?

From the above examples, it is clear that a person can belong to an underrepresented population but still be highly privileged. In fact, our motivation for writing this article was because we feel uncomfortable identifying ourselves as underrepresented without acknowledging and being transparent about our own privileges. Although women/working mothers and people from the global South are often discriminated against, we have benefited from some of the best education systems available anywhere. We have succeeded working in renowned institutions. And we derive benefits from the wealthy, peaceful and tolerant societies we currently live in.

This does not mean that discrimination still does not exist for us and many of the most highly educated people in the global North. It does. Many continue to be racially discriminated against in getting jobs or promotions, or have been sexually or professionally discriminated against because of their gender. And this does not mean they did not work hard to become successful, or that they cannot use their privilege to do good. But does belonging to a group that is underrepresented or more frequently discriminated against (e.g. being a woman) mean that one is best placed and have the right to represent all other people from this group? Perhaps it is sufficient to have some shared perspectives and history, and motivation to be a facilitator for change?

For our part, we aim to use our privilege to serve as allies in the quest for a more diverse and equitable global health. We believe that everyone working in global health can do three things to ensure that privilege does not trump underrepresentation.

Be transparent. Both global health organizations and representatives of populations who have been newly included on their boards and in their ranks need to be transparent about selection criteria and existing privileges. Achieving good public optics through diversity quotas may seem to make a difference, but for meaningful representation, it is equally important to be transparent that identity is not determined only by one variable (e.g. gender)—and who remains excluded. Institutions must also strive to collect disaggregated indicators on who comprises their organizations. Real inclusion needs to start with a realistic picture of the status quo, which needs to be publicly shared.

Try to include the many, not just the one. Those who are included need to serve as envoys and ensure that all diverse members of a group are represented. This is hugely challenging for groups that are fragmented, have few resources for communication or to set up institutional infrastructures, and may span large portions of the population. The elite is by definition a small group, the underrepresented a disproportionate population. True inclusion requires resources. This is also challenging if a representative of a group does not identify primarily with that group. True inclusion requires ensuring that other voices can be heard too.

Do not instrumentalize and tokenize. At the core of these movements is the acknowledgement and appreciation that expertise, insights or lived knowledge do not belong to one gender, race, sector (e.g. government or private sector), or other group. Women, ethnic minorities, members from civil society, and academics are used to being invited to panels or jobs to fill quota expectations. This type of tokenism is unfortunately also true of many global health programs and boards. They are often given explicit directions of what is expected, and what permissible, de facto instrumentalizing their roles. Real inclusion requires a willingness to set agendas differently, run discussions openly, reach decisions inclusively, and implement and finance them in different ways.

Underrepresented people may also have vast privileges, including education, socio-economic means, job positions and status, or physical location. To truly further the inclusion agenda, these privileges need to be acknowledged transparently (as we have, in this article). In the longer term, the biggest source of power imbalance and lack of inclusion in global health stems from the fact that high-income countries provide a huge share of the global health funding, and this "buys" them immense power and control. This has been clearly evident during this pandemic crisis. So, the search for equity and inclusion in global health cannot be decoupled from the bigger quest for a just and fair world order.

EDITOR'S NOTE: This story was corrected on June 12, 2020 from an earlier version that had the name of the organization WomenLift Health wrong in the third paragraph.

Katri Bertram is a Senior Global Health Consultant, and former Head of External Relations at the Global Financing Facility at the World Bank.


Madhukar Pai is a Canada Research Chair in epidemiology & global health at McGill University in Montreal, the director of McGill Global Health Programs, and director of the McGill International TB Centre.