Solutions to the COVID-19 Crisis in Asia 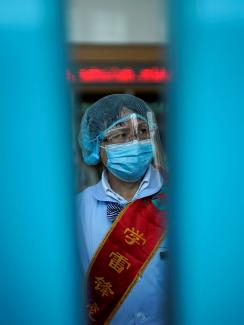 A worker wears a mask and a face shield during a government organized media tour at Tongji Hospital following the COVID-19 outbreak, in Wuhan, Hubei province, China, on September 3, 2020. REUTERS/Aly Song
by Snehal A. Patel and Sylvana Q. Sinha October 6, 2021

COVID-19 exposed serious gaps in health-care systems around the world, across wealthy and emerging economies alike. The complex challenges of delivering health care have made the rapid adoption of new models of care extremely difficult. Health-care systems have traditionally been built to put physicians and other allied health practitioners in charge of system efficacy. While this strategy takes advantage of health practitioners' areas of expertise, it has also led to certain unexpected consequences, and in many health systems resistance to any change that threatens the status quo has made wholesale improvements impossible.

The urgency of the COVID-19 pandemic crisis, however, demanded a shift in thinking, forcing governments to engage in new and different ways of working with the private sector and start-up community. Some of the most compelling examples of this engagement can be found across Asia, where a number of cross-sector partnerships have filled critical gaps in innovative ways, offering models for global health-care systems.

During the first wave of COVID-19, health-care systems around the world stretched past capacity. As stories of patients being triaged in parking lots became all too common—not only in emerging markets, but even in more developed economies such as the United States, Spain, and Italy—these crisis moments inspired a desperate search for new approaches for managing rapidly expanding patient loads and preventing a catastrophic breakdown of health-care systems globally. Governments recognized that this existential challenge would require bold action and collaboration to remove impediments to progress that had long stymied innovation in health-care for years.

Innovations that had formerly languished due to red tape and status-quo mentality were seized upon by governments seeking tools to manage the crisis, in wealthier and emerging economies alike. Telemedicine was one of the first areas where governments realized they needed to clear a path so patients could access remote care, protecting them and their providers from exposure to the virus. In South Korea and Japan, pre-pandemic opposition to telemedicine from physician associations based on claimed safety concerns—despite numerous studies indicating trouble-free operation in other markets—prevented the deployment of telemedicine services. But the pandemic finally forced governments to allow such services to be provided to a public desperate for access to routine health care during lockdowns.

In Bangladesh, startups offering telemedicine services formed a "Telemedicine Working Group" and collaborated with the government to provide overflow medical resources to staff, including a free 333 hotline that was set up for COVID-19 inquiries from the public. As speedy approval from the government of e-prescriptions became necessary, the working group's advice was sought to create a format for e-prescriptions that made sense for providers and pharmacies alike.

These rapid proactive actions by governments allowed patients to be served more efficiently, and ultimately reduced the overall burden on stretched health-care systems. There are similar examples, including in the United States, where the Centers for Medicare and Medicaid (CMS) for the first time decreed that telemedicine services would be allowed across state lines, and the federal government allowed for the reimbursement of telemedicine services for patients on Medicare and Medicaid, two of the largest health-care programs in the United States. The speed of this rule-making was particularly well-suited to start-ups that were able to move quickly to meet the new need in the market, and it effectively served patients in need of access to care during the pandemic.

It is critical to note that in many countries in Asia, particularly across emerging markets, the private sector plays a significant role in the provision of health care. In South Asia in particular, more than two-thirds of health-care spending comes from the private sector. In so-called "normal times," this works well, but during a public health crisis, there is a heightened need for government leadership to structure resources effectively.

Notably, many countries in Asia were able to quickly utilize technology to fill in gaps in their systems, and many surpassed the West in terms of their health-care capabilities. A striking example is the speed of development and deployment of technical contact tracing. In the West, contact tracing was largely hobbled by technical missteps and poor adoption and execution. East Asian nations, in contrast, managed to overcome these challenges well. While some have argued this success was primarily achieved in countries where government mandates and coercion are more common than in the West, the success of this strategy spanned nations across the democratic spectrum. Much of the collective success of countries as diverse as China, Japan, Vietnam, South Korea, and Singapore can be attributed to a combination of the rapid adoption of needed technologies and a digital infrastructure enabled and activated by governments with seamless sharing of data with businesses.

Another example of Asian agility featuring strong cooperation between the private sector and government was the unprecedented plan launched by the Indonesian government during the height of the country's COVID surge in July 2021. For the first time ever, the government promoted and covered the cost of using start-up digital health platforms as the first triage point for care nationwide. The ambitious plan was part of an effort to reduce the pressure on government hospitals that were nearing collapse due to the increase in the number of COVID patients. Reordering the national infrastructure to actively channel patients with more basic health-care needs through established start-up digital platforms greatly mitigated the pressures that the government’s brick-and-mortar facilities were experiencing.

The Power of Partnerships

Looking ahead, the challenge facing countries across the world will be how to live long-term with COVID-19. Governments will need to learn how to transition their economies and societies to balance the risks of the virus and its overwhelming impact on health-care infrastructure with the need to re-open so that the livelihoods of billions of people can get back on track. In emerging markets, where most of the world lives, vaccination rates remain relatively low, and it is generally not expected that herd immunity will be achieved until at least the end of 2022. In Asia, the private sector, and more specifically start-ups, is filling a need. In 2018, Singapore embraced the promise of telemedicine quite early when it set up a region-first regulatory sandbox sponsored by the Ministry of Health. The ministry took the initiative to collaborate with startups to help draft updated clinical regulatory guidelines and to help legitimize virtual health as an approach that supported the government's longer-term roadmap in providing remote health-care services for its aging population. The timing of this initiative turned out to be opportune given that it occurred prior to the pandemic. Singapore has continued to double down on this partnership with startups, in areas as diverse as quicker results for COVID testing and vaccine passports.

It is perhaps a silver lining of the COVID-19 pandemic that the government processes that have traditionally stymied change in health care have finally caught up to the speed of health-care innovation. Although Asia has historically suffered from a lack of resources for public health care, it has given rise to effective examples of how to supercharge private sector partnerships that have been a bedrock of care. With multiple rapid success stories from coordinated action across Asia, governments should continue to embrace rapid iteration with private sector partners, inspiring nations around the world to do the same.

Snehal Patel is a physician and attorney with experience as a serial entrepreneur and venture capitalist. He is also currently the CEO and Co-founder of MyDoc, Asia’s leading patient-centric digital health-care platform.


Sylvana Sinha is an attorney and entrepreneur with a passion for innovative, impactful approaches to governance and international development. She is the Founder and CEO of Praava Health, Bangladesh's fastest growing consumer health-care brand. She is also a life member at the Council on Foreign Relations.