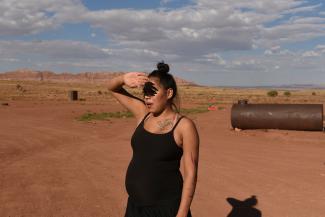 A pregnant woman from the Navajo Nation, shades her eyes away from the sun, in a remote area of the Bodaway Chapter in the Navajo Nation outside of Gap, Arizona, on September 14, 2020. REUTERS/Stephanie Keith
by Annie Chan July 5, 2022

All people should get to live long lives in full health. Unfortunately, that is not the case for many American Indian and Alaska Native peoples (AIAN) in the United States, or Turtle Island, as it is traditionally known by some AIAN individuals.

In 2019, AIAN peoples had the lowest life expectancy nationwide at seventy-three years, six years less than the overall life expectancy. The life expectancy of AIAN peoples has experienced virtually no improvements since 2000, in stark contrast to the gains made by other race and ethnicity groups over the twenty-year span. It is similar at the county level: Native Americans experienced a lower life expectancy in 2019 than in 2000 in nearly 62 percent of the studied counties over the two decades, whereas the other four race and ethnicity groups saw increases in over three-quarters of the studied counties. The findings are from a new study authored by researchers at the Institute for Health Metrics and Evaluation (IHME) and the National Institutes of Health (NIH).

Health disparities are linked to structural racism and historical trauma. Donald Warne, a member of the Oglala Lakota tribe and the associate dean of diversity, equity, and inclusion at the University of North Dakota, gave a lecture in 2019 on the impact of unresolved trauma on American Indian health equity. Warne pointed to events such as the colonizers' ill intent to wipe out Native tribes by spreading smallpox in the 1760s, the forced exile of Southeast tribes to Oklahoma on the Trail of Tears in the 1830s, and the 150-year span in which indigenous children were taken from their homes to federal boarding schools to "assimilate" them into white society. According to Warne, these are a few examples of the racist policies that deeply affect Native Americans' health outcomes today.

Health Interventions By and for Native Communities

These life expectancy estimates paint a bleak picture and should serve as a call to action to strengthen efforts in improving the health of Native Americans. Many Native researchers advocate for greater involvement of Native health experts in decision-making and recommend the development of culturally grounded interventions led by and created for Native communities. Two examples of indigenous-led efforts are the 2014 Healthy Diné Nation Act in Navajo Nation, which encourages nutritious eating, and 2022 House Bill 1725 in Washington State, which aims to address the missing and murdered indigenous women crisis.

Lack of access to healthy and affordable food is another driver of health inequality.  For instance, there are only thirteen grocery stores on the 27,000 square miles of Navajo Nation (a land area larger than ten U.S. states). These disparities likely account for the disproportionately higher rates of diabetes and obesity in Native American communities.

Matthew Frank, who is an enrolled member of the Navajo Nation and a PhD student in social welfare at the University of Washington, acknowledged via Zoom the hurdles and added, "There are these deficiencies, but there's also innovative, resiliency-based projects happening." Frank referenced the Healthy Diné Nation Act as a way to address nutrition and contribute to food sovereignty. The act, which the Navajo Nation passed in 2014 and renewed in 2020, eliminates taxes on certain fresh fruits and vegetables and was the first junk food tax in any sovereign tribal nation and in the United States. Not only did the tax lead to a 3 percent decrease in unhealthy food purchases per year, the tax revenue is used for community wellness projects like the creation of walking trails and traditional food demonstrations to further promote Diné health.

"Folks that I know who are doing this work, they're problem solvers, they're innovative, and they're doing it in a very respectful, culturally based way that's aligned with Navajo values and culture," Frank said.

There are only thirteen grocery stores on the 27,000 square miles of Navajo Nation

An Alert System for Missing and Murdered Indigenous Women

The missing and murdered indigenous women and people (MMIW/P) epidemic was the top issue on Project Censored's Top twenty-five stories ignored by media in 2019-2020. The U.S. Centers for Disease Control and Prevention (CDC) listed homicide as the sixth leading cause of death for Native girls aged 1-19 and Native women aged 20-44 years.

Rosalie Fish, who is Cowlitz and Muckleshoot, uses her platform as a collegiate runner at the University of Washington to bring awareness to the MMIW/P crisis by wearing a red handprint during competition.

Fish testified on behalf of the Muckleshoot tribal community in support of Washington State House Bill 1725, which proposed the creation of the first alert system specifically designed to identify and locate MMIW/P in the United States. The bill was signed into law in March 2022, sponsored by Rep. Debra Lekanoff, who is Tlingit and Aleut.

Fish explained her role in the red alert via Zoom. In her testimony, she wove together three MMIW cases after speaking with multiple family members of the women: Misty Upham, who was found at the bottom of a ravine by community members eleven days after they tried to report her missing; Renee Davis, who was fatally shot by sheriffs conducting a welfare check; and Kaylee Nelson-Jerry, who is Fish's cousin and has been missing since 2019. Fish's testimony sought to bring attention to the systemic barriers, financial burden, and emotional toll that families of MMIW/P face when trying to get help or look for their loved one.

Fish also wanted to recognize other activists' tireless work in this space. "As athletes, we have a specific privilege and platform. We end up having a lot of eyes on us," she said. "The heart of this movement comes from the indigenous advocates who are working directly with families, as well as the Indigenous people who are in policy."

These case studies demonstrate the importance of centering indigenous voices in developing health solutions for Native communities. As Frank said, "The statistics are stacked against you. But at the same time, there are ongoing conversations about what kin members can do."

ACKNOWLEDGMENTS: The author would like to thank Laura Dwyer-Lindgren, Parkes Kendrick, Katherine Leach-Kemon, Tamara Gibbs-Franklin, and Rebecca Sirull for their expertise and guidance in the development of this piece.