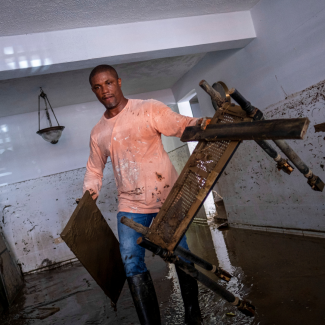 A man wades through water in his home, carrying damaged furniture in the aftermath of Hurricane Fiona, in Toa Baja, Puerto Rico, on September 20, 2022. REUTERS/Ricardo Arduengo
by Mary Brophy Marcus September 27, 2022

A week ago Sunday, Puerto Rico was pummeled by Hurricane Fiona, which dumped more than 30 inches of rain on some areas and led to massive power outages that left 1.5 million people without electricity for a week. Close to half a million customers are still waiting for power—leaving food supplies, water systems, and health facilities fragile.

Carmen Vélez Vega, professor of public health and social determinants of health at the University of Puerto Rico's Graduate School of Public Health, spoke with us last week from her office in San Juan, discussing the power situation and how it is affecting peoples' lives, especially those with the fewest resources.

Think Global Health: Where are you now and how is the power situation?

Carmen Vélez Vega: I am in the capitol city, San Juan, and we are mostly without electricity. Most of the entire archipelago is without electricity [Puerto Rico is made up of the main island and 143 small islands, islets, and cays]. It's pretty bad and most people are also without running water.

The southern and western parts of the island got hit really hard, and the center of island as well. People lost their homes. The communication grid is down and few people have satellite internet for communicating.

The governor said yesterday we'd probably have electricity by yesterday, but we haven't.

Think Global Health: How does the current situation compare to the aftermath of Hurricane Maria, which hit Puerto Rico on September 20, 2017?

Carmen Vélez Vega: If you come to the metropolitan area, you won't see devastation like after Hurricane Maria. There's no huge structural damage. The main damage is not having electricity. People are losing their food—food is going bad—and they do not have water.

Think Global Health: How is the health care system holding up?

Carmen Vélez Vega: Most hospitals are running except for the ones in the south. But it's not clear when they will get power going again. One good thing is that the [state run] community health centers are up and running. They're doing better than the hospitals because they have their own mini power grids. The difficulty is that a lot of people are not able to get to them. We have a huge elderly population. We have a lot of people alone in their homes who don't have the ability to get help. They may have the money, but they have no way to get to the doctor.

Think Global Health: You conduct research on water. What are your concerns in this area now after Fiona?

Carmen Vélez Vega: We study the effects of contamination on preterm birth and child development. One thing we're doing in our research program is we work with pregnant women and small children, and we try to get them water filters—we provide water filters to all of our participants.

We found groups in Puerto Rico who do relief work. We are lucky that some organizations came after Maria and stayed: Habitat for Humanity, Americares, and some local groups, such as the Puerto Rico Public Health Trust, a non-profit, but a government aligned organization and they're doing work around the island. Tomorrow they'll be out delivering boxes of food and water to areas that are affected. Other local organizations that are outstanding in their response include Casa Pueblo, Taller Salud, Matria, Waves Ahead, and Coai.

There is a shortage of gas on the island, as well. This morning, as I was coming to the university—where we do have power due to a generator—and just to get here, I had to go to four gas stations before I was able to get gas. And this is someone like me, who can move. My worry is that people who can't get out and don't have communications [internet or power] are unable to get help. Add to that the lack of food and water. And I'm concerned that even if they do have access to water it may be contaminated.

Think Global Health: Has the weather caused any damage and has it cleared up enough for safe travel by humanitarian groups?

Carmen Vélez Vega: It was raining for such a long time and there have been mudslides. Trucks will go up to more remote communities and take them food.

A lot of harm has occurred in the agricultural area. Local agriculture has lost much of their produce and other produce has spoiled due to no refrigeration.

Think Global Health: How are you doing?

Carmen Vélez Vega: I am sad and frustrated. I thought we had a plan. But the electric system is so damaged, and they really haven't put the work into it that it needs. There are people who are fine and have generators, but many people are suffering. Almost 50 percent of the population is in poverty. There's a very high number of elderly people because a lot of young people left after Maria, and we lost a lot of young people to the economic depression. And I worry for people with chronic health conditions.

I am sad and frustrated. I thought we had a plan

Think Global Health: We're seeing Hurricane Ian pummel Cuba and the Gulf of Mexico, heading to Florida. Is storm season still a concern for Puerto Rico in the weeks ahead?

Carmen Vélez Vega: Hurricane season won't be over until November. Anything can happen. With climate change, it's bad. People don't have the money to move. The government was trying to get displaced people in apartments. But here [for the most part], the shelters are schools and churches, organizations and community centers—some are better than others. Some may have beds for people who are ill and some may not.

It's a pity; we talk so much about making mini power grids after Hurricane Maria, and it didn't happen.

Think Global Health: What does Puerto Rico need most right now after Fiona?

We're going to see many people getting sicker. We have a huge number of people with chronic illnesses here, and all of those people will see their treatments affected and a lack of medication.

You think that after so much work [after Hurricane Maria] it would be better. But the government does not do their part. Right now, they have not made a declaration of disaster in many locations—they left out most of the towns that were affected (only 55 of Puerto Rico's 78 municipalities will receive federal disaster assistance). So, FEMA can't help them. It doesn't fit in my head.

EDITOR'S NOTE: Carmen Vélez Vega is also an investigator for PROTECT, a research program funded by the National Institute of Environmental Health Sciences. She also leads the Community Engagement Core program at the Center for Collaborative Research in Health Disparities, which works to reduce health disparities in the Puerto Rican population through community-academic partnerships.