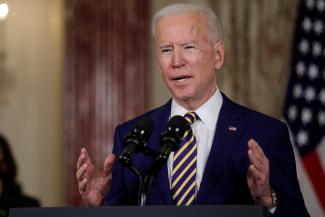 On February 4 at the U.S. State Department, President Joe Biden provided his vision for "America’s Place in the World" in his first speech on foreign policy as president. His remarks also constituted the first foreign policy speech by a president in U.S. history delivered during a pandemic that has killed 470,000 Americans and over two million people globally, devastated economies, exacerbated social and racial inequalities, agitated geopolitics, contributed to authoritarianism's rebound, and produced the tragedy of vaccine nationalism. The U.S. government's mishandling of the pandemic has contributed to the degradation of America's place in the world. Yet, President Biden's message that "America is back" contained little about the pandemic and the challenges this catastrophe has produced for U.S. foreign policy.

In the speech, President Biden described the pandemic as one of many "accelerating global challenges" that require cooperation. He mentioned U.S. re-engagement with the World Health Organization (WHO) as important for countering COVID-19 and preparing for future pandemics, and he asserted that U.S. assistance to "strengthen health systems in far regions of the world" reduces the risk of future pandemics to the United States.

The U.S. government's mishandling of the pandemic has contributed to the degradation of America's place in the world

The speech devotes more attention to other important issues, such as countering China and Russia, the U.S. military's global footprint, the coup in Burma, rebuilding U.S. foreign policy institutions, and defending democracy. President Biden announced initiatives on climate change, cybersecurity, ending the war in Yemen, refugee admissions, LGBTQ+ issues, and a summit of democracy—but none on global health. The speech contains nothing to indicate that President Biden sees the U.S. foreign policy on global health as important in advancing his strategic plans to confront China and Russia, counter authoritarianism, defend democracy, and restore American diplomatic and moral leadership.

The speech focuses on pandemic threats to the United States, but this focus does not change global health priorities in U.S. foreign policy. The U.S. government has long prioritized pandemics as a national security threat to be addressed through cooperation within WHO, foreign assistance to reduce pandemic risks to the United States, and U.S.-led initiatives, such as the Global Health Security Initiative and the Global Health Security Agenda.

However, as the CFR Independent Task Force on Improving Pandemic Preparedness concluded, the priority accorded to pandemic threats did not prepare the United States to respond effectively to COVID-19. The glaring gap between priority and practice has generated debates about whether the United States should double down on its pandemic-centric, national security, and "America Foremost" approach—or dramatically change how it addresses global health. President Biden's speech suggests that he will prioritize the national security threats that pandemics pose to the United States and follow traditional strategies to improve U.S., multilateral, and foreign pandemic preparedness and response capabilities.

For many, the pandemic is a transformative event that should cause domestic, foreign, and global policies on health to move away from security-based strategies that abjectly failed during COVID-19 and towards approaches centered on solidarity, social determinants of health, and universal health care. President Biden's speech indicates that he will not transform U.S. foreign policy approaches to global health. If the president narrows the gap between words and deeds on U.S. pandemic preparedness, other issues on the global health agenda might be further marginalized. Thus, the speech might serve as a reality check in terms of what to expect from the United States in the battle with COVID-19 and the pandemic's aftermath.

For those picking through the U.S. policy wreckage produced by the pandemic, the speech might look like a missed opportunity. Despite framing pandemics as national security threats, engaging with WHO, and providing foreign assistance to lower pandemic risks to the United States, the U.S. government was unprepared for COVID-19 and mounted shambolic domestic and international responses to it. Given this policy debacle, President Biden's challenge is to find within one of the worst human disasters in generations a new, credible vision of U.S. leadership on global health and weave it into his strategic geopolitical, ideological, institutional, environmental, and ethical ambitions for U.S. foreign policy.

Convincing the world that America is back in terms of global health will be a long and arduous road. But foreign policy journeys often begin with one speech, however one interprets it.

EDITOR'S NOTE: David P. Fidler was an observer on the CFR-sponsored Independent Task Force. All statements and views expressed in this article are solely those of the individual author and are not necessarily shared by the Task Force or its membership.