Go to homepage
"Pregnant People Will Die as a Result of Overturning Roe v. Wade"
Gender

"Pregnant People Will Die as a Result of Overturning Roe v. Wade" 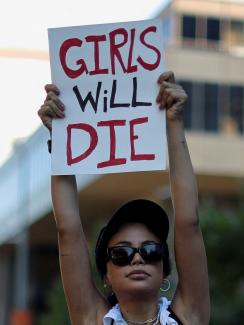 The U.S. Supreme Court's decision to overturn Roe v. Wade—which recognized a constitutional right to abortion care for the past forty-nine years—will not only be devastating by ending access to abortion care in the twenty-six states that have already banned it or are poised to ban it, but also stands in direct opposition to evidence-based medicine and public health.

Abortion is essential health care, which is a statement affirmed by seventy-five U.S. medical organizations, including the American Medical Association (AMA), American College of Obstetricians and Gynecologists (ACOG), Society of Family Planning, and the World Health Organization. In fact, restricting access to abortion care does not decrease the number of abortions, it only makes them unsafe. And lack of access to safe and compassionate abortions undermines pregnant people's dignity, autonomy, and right to self-determination.

In the United States, one in four women will have an abortion by age 45 and most of them—approximately 59 percent—will already be mothers. Though people aren't, and shouldn't be, required to justify why they need abortion care, it can be helpful for others to understand why people seek it. Barriers to accessing or using contraception, intimate partner violence, rape, and incest can all lead to unwanted pregnancies and the need for abortion care. Fetal anomalies that are incompatible with life or with quality of life are also reasons people choose abortion. Medical comorbidities such as cancer or cardiomyopathy in the pregnant person can make pregnancy a threat to health and decrease the pregnant person's likelihood of surviving these life-threatening illnesses. And pregnancy complications, such as placental abruption and pre-eclampsia, can necessitate abortion in order to save a pregnant person's life.

In the United States, one in four women will have an abortion by age 45

In 2018 the National Academies of Sciences, Engineering, and Medicine convened an expert committee to review and synthesize the robust medical, social science, and public health literature on the safety and quality of abortion care for U.S. women. Their report, "Safety and Quality of Abortion Care in the United States," references many sources, including more than 500 randomized controlled trials, systematic reviews and meta-analyses, retrospective and prospective cohort studies, case control studies, patient and provider surveys, other observational research types, guidelines, regulations, or reports. This committee found that abortion care in the United States is safe and effective.

In contrast, the risk of a pregnant person dying due to childbirth in the United States is approximately 14 times higher than the risk of dying due to abortion. And Black women bear an unequal burden. According to the National Center for Health Statistics, in 2020, the maternal mortality rate for non-Hispanic Black women was 55.3 deaths per 100,000 live births—2.9 times the rate for non-Hispanic White women (19.1). The overturning of Roe will lead to an exacerbation of this already existing health inequity and will disproportionately impact many groups of people who are already oppressed and marginalized, including Black, Indigenous, and other People of Color, as well as people with low incomes, young people, LGBTQ communities, immigrants, and people with disabilities.

The health inequities that already exist are rooted in many factors. Access to evidence-based, comprehensive, patient-centered reproductive health care has long been uneven in the United States, including access to contraception, abortion, and maternity care. Black and Indigenous individuals have the worst access to contraception and the lowest-quality maternal care in the United States, due to structural and interpersonal discrimination that includes race and economics. The need for abortion care is increasingly concentrated among low-income individuals and difficulty paying for abortion care is an enormous challenge and cause for delay among lower-income, uninsured, and rural individuals. Young people face unique burdens to abortion care, in part because they tend to learn later than others that they are pregnant, which can lead to abortions later in pregnancy that cost more.

The future for people capable of becoming pregnant in the United States seems bleak and the consequences of forced birth are well-known. The Turnaway Study, which prospectively followed two categories of people who sought abortion care—those who were able to receive it and those who were not—showed numerous negative outcomes for those who were denied a desired abortion. They reported more life-threatening antepartum and postpartum complications, such as eclampsia —a potentially life-threatening condition during pregnancy—and were more likely to be raising children alone. They were also more likely to stay in contact with a violent partner, to have an increase in household poverty lasting at least four years, and to have more debt, such as bankruptcies and evictions. In addition, forced births were also associated with poorer maternal bonding (for example, "feeling trapped or resenting the baby"), with those children less likely to achieve developmental milestones.

At a time when other countries have moved to legalize abortion, the decision to remove federal protection to abortion care is backwards and out of step. The public health ramifications will be swift and devastating. Though physicians and other health care providers, advocates, and philanthropists will move mountains to address the chasm, it won't be enough. Pregnant people will die as a result of overturning Roe. We will all be forced to bear witness.