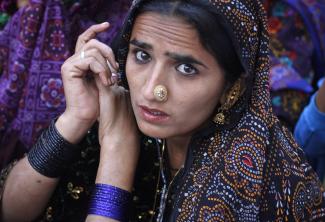 A woman takes part in a rally to commemorate International Women's Day in Karachi, Pakistan, on March 8, 2012. REUTERS/Athar Hussain
by Anmol Irfan August 25, 2022

On July 20, 2021, 27-year-old Noor Mukadam was found murdered in Zahir Jaffer's home in Islamabad, Pakistan. The gruesome nature of the act, and the fact that both Noor and Zahir, a male acquaintance, came from influential families rocked the country. While Noor's case was picked up by international media outlets, many of the women who lose their lives in Pakistan due to gender-based violence rarely receive the same level of attention.

The last few years have been particularly traumatizing for women in Pakistan as more cases receive public attention, and there are increased calls for accountability of perpetrators and for more policies and programs that protect women.

In addition to Noor's case, there have been many other examples of gender-based violence against women. Fifteen-year-old Dua Zehra, who allegedly "eloped" with Zaheer Ahmed, a 21-year-old man, was later discovered to have been trafficked by a gang. The horrifying incident of a woman gang raped on Lahore's major motorway in 2020, was met with indifferent remarks by the city's police chief and then-Prime Minister Imran Khan.

Gender-based violence against women is hardly new in the South Asian country. Cases including that of 28-year-old Samia Sarwar, who was murdered by her family in 1999 for seeking divorce, are mentioned briefly and then quickly pushed aside by some media because they "ruin Pakistan's image," or simply because some victims are not considered important enough to be cared about. When these stories receive attention, they often and quickly become skewed and minimized by a slew of gendered disinformation that contributes to negative attitudes toward women, creating more danger for them.

When Noor Mukadam's father was being cross-questioned by the sessions judge during the trial for his daughter at a court in Islamabad, he was asked, "Can this kind of relation exist in the Islamic Republic of Pakistan?" When talking about Noor and her murderer's previous acquaintance, legal experts defending Jaffer implied that Noor was at fault for her own death simply because she was friends with men.

The chief police officer handling the Lahore motorway case said in an interview that the incident happened because the woman was traveling alone on a dark road, and that she shouldn't have been out late. These kinds of comments and phrases are normalized in Pakistani media to blame women for violence committed against them, absolving the perpetrator and society at large of any accountability in the matter.

"In the Dua Zehra, Noor Mukadam, and motorway rape cases, the media, particularly digital media outlets, weaponized false and private information to blame the victims for the crimes committed against them and assassinate their characters. Gendered disinformation, in this light, has been around for a while, as a tool of voice for patriarchal attitudes and narratives. Disinformation such as this, though specific, also has a generalized effect on survivors who can see how society treats victims. Thus, often discouraging them from reporting or speaking up," says Shmyla Khan, director for research and policy at Digital Rights Foundation (DRF) and a lecturer of privacy law at Lahore University of Management Sciences. But what the media cannot hide is that Pakistan is facing a femicide crisis and it's something women are refusing to stay silent about any longer.

Using the momentum of Mukadam's case—which led to Jaffer's conviction and death penalty—activists across Pakistan have taken it upon themselves to lead an "unsilencing" of this previously hushed issue. Social norms and structural oppression have forced women to keep quiet about violence for too long. Fatima Razzak, a women's rights activist who has worked with victims of sexual assault, points out that in cases of sexual violence in South Punjab—where she carried out her research—conviction rates have never exceeded 4 percent.

This mindset is often prevalent in medical workers as well, which can impact the medical treatment and assistance survivors of violence receive. Tooba Syed, a gender researcher, activist, and dentist, points out how she and her colleagues never received any training on how to deal with cases of gender-based violence throughout dental school. "Doctors are not trained to have a survivor-centered approach. The only people in the medical field trained to deal with cases of domestic violence are lady health workers and there are no medical legal experts who can work with survivors," she says, adding that the training that does happen isn't from the state, but from international organizations like the World Health Organization.

The mistreatment of women who have experienced violence has led to a crisis where women are dying, and where those who survive receive no help. While most people condemn murder, many also champion patriarchal norms from early childhood that can include ideas that women are to blame for sexual violence because of the clothes they wear, or that men are naturally violent and angry and that a woman who can't deal with her partner's abuse did not show enough patience. These ideas are introduced when children are young; boys are encouraged to be "strong" and aggressive and women are taught to compromise. Aymen Fatima, a political activist and head of the Feminist Students Collective, says, "It starts with the sensitization of a child, what you're teaching them and what they're exposed to."

It's here that initiatives such as school reform organization Zindagi Trust's Life Skills Based Education program is crucial to helping educators and parents help children understand both their own physical safety and that of others.

But activist Syed, while appreciative of the work people around her are doing, also points out that individual initiatives can only go so far without state recognition and support.

"The government needs to support this so that women can at least have an alternative option in cases of violence," says Fatima, adding that good legal support is another crucial step in helping survivors. Having these solutions in place also improves the well-being of women across the country, helping them engage more deeply in economic and social activities, because they know that they have structural support in times of crisis.

In 2011, the Women's Ministry in Palestine adopted a national policy aimed at combating violence against women and effectively helping survivors. More importantly, survivors of violence were part of the legislation's drafting. However, as important as it is to center survivors' voices in discussions, it is only the first step and until statewide initiatives target gender sensitization across the globe, femicide will continue to be an unfortunate reality, especially for the most vulnerable. In Pakistan, this would mean seeing the first steps in state sponsored action against perpetrators like Zahir Jaffer, and identifying and cracking down on gangs like the one that preyed on Dua Zehra. Pakistani women are still blamed for their own safety, but it's time the state took responsibility instead.

Anmol Irfan is a Muslim Pakistani feminist and journalist who aims to explore issues around intersectionality, gender and minority cultures in her work. When she isn't writing she's usually eating and wishing to travel the world—pre pandemic, of course.

The Devastating Use of Sexual Violence as a Weapon of War